A Shoutout for the Known and Still Loved Sushi Seki

Share All sharing options for: A Shoutout for the Known and Still Loved Sushi Seki

To get everyone through the dog days of summer, we've asked our readers to tell us about a favorite, somewhat oddball restaurant, bar, or place of note that perhaps exists mostly off the radar. We'll be running submissions throughout the week, so please send in further recs to tips@eater.com. 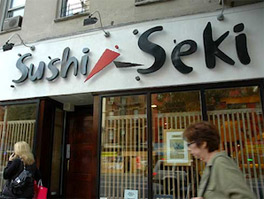 I looked over at the ripped Russian guy sitting beside us at the bar. His check already paid and signed, he took out a wad of bills, wrapped them in a napkin, and handed them to the sushi chef who for the last two hours had been dishing out omakase to him and his female companion. This is Sushi Seki, a beloved UES spot frequented by boring UES residents, prep schoolers from Browning and the like, Ed Hardy enthusiasts, Wynton Marsalis, chefs who've wrapped up their shifts, and folks who just know their raw fish. Oh yeah, and Russian mafiosi.

The inventive brand of sushi Chef Seki offers is inspired by (read: ripped off from) the creations at Sushi Of Gari, the snob temple 16 blocks north where Seki toiled before striking out on his own. It's the anti-Yasuda, a place where they'll top the salmon with a seared tomato, creating a bonkers mouthful that simultaneously delivers hot, cold, mushy, oily, and rather surprisingly, clean. It is fucking awesome.

The rest of the arsenal is too vast to enumerate, but if you go, try to remember these words: eel avocado, butter fish, snow crab, tuna tofu, young yellowtail with jalapeño, and pickled toro. If at the bar, omakase. If at a table, the sushi platter, a well-priced assortment of the greatest hits that comes with two cut rolls; the omakase at a table, which comes in flights of three or four pieces, doesn't exactly work.

It's a bit cheaper than Gari, it's a hell of a lot more laid back, and the sushi bar's open till 3 AM. The clincher, though, is the gregarious, witty, mustachioed Koji, a legendary maître (among certain circles) that patrols the terrain in a charming frenzy. He looks an awful lot like George Harrison.
—Gabe Ulla
· Previous Editions of You May Also Enjoy [~ENY~]
[photo credit]