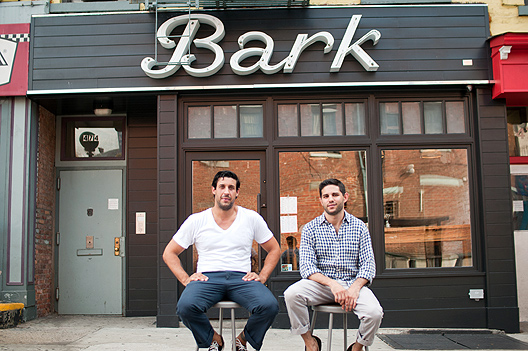 Joshua Sharkey and Brandon Gillis opened Bark in Park Slope in August 2009, at a time when hot dogs were popping up on a lot of very refined menus. But, even if it may have seemed like they were just another restaurant jumping aboard a gourmet comfort food trend, in reality, the project had been gestating for several years, and the idea was not to do something gourmet, but rather to create a version of a fast food restaurant with a more homespun, ingredient focus. A year later, the restaurant has become something of a neighborhood fixture, and Joshua and Brandon have found a happy medium between providing a product with a lot of value that people love, and creating a menu that changes seasonally, and reflects their considerable talents as vets of some of NYC’s finer restaurants.

Joshua Sharkey, Chef and Co-Owner: We worked together at Tabla, seven or eight years ago. We didn’t like each other at first, but at some point, we decided that we didn't hate each other and we started a company together where we catered parties on the side, mostly because we didn't make any money at Tabla. And that’s where we realized that we really work well together, we make really good food, we have the same ideas. Brandon Gillis, Chef and Co-Owner: I think we wanted to take all the principles we learned from fine dining, which is usually about using great products. We kind of looked around and thought, “this has never really been done with fast food.” And now we’re kind of finding out why its never been done.

Was Park Slope your first choice for a location? BG: Not even close. We probably looked in Manhattan for about a year and a half. It was really at a time when the real estate market was like, right at the end, the apex of everything being really expensive. We couldn’t find a suitable deal for what we were looking for. We both lived here, and had been in the Park Slope area for seven, eight years. I worked at Franny’s for five years, so I pretty much haven’t left in like nine years. JS: Yeah, it happened pretty organically. We actually had a lease signed on the Lower East Side. That actually happened to us twice, in the East Village as well. It just so happened that we started here, and it ended up being the best thing that could have happened to us.

How long did the build take? JS:From when we signed our lease, it took ten months. It was a completely raw space, so it required a lot of construction. I have a food background, Brandon has a food background, but we didn’t know anything about construction. We enjoy projects like this, just taking this from a raw space, but it took a long time. We did all the demo and stuff. BG: Getting anything done in New York City takes a really long time. The city moves really fast when you don’t want it too, and then it moves really slow when you need it to move really fast. We did basically what a lot of first time business owners do — you try and do as much stuff as you can and save money, that was our goal.

How did the menu come together? JS: In the beginning we had a lot of specials, and then we realized that they don’t sell. People just want the core menu, the hot dogs. We had planned for all this stuff, but we had to slowly implement it. We didn’t want to put anything on the menu unless we felt like it was the best that we could do—it took us about a year to develop all the recipes. BG:We make all our own pickles, we do all our own relishes, and we’re grinding our meat fresh everyday for our burgers. That whole process, developing the systems and getting it right, it took three years of putting our heads down and really working on it. I think that’s something that a lot of people don’t see when they come in here.

How did the opening go? JS: Oh, it was a mess, like always. It went better than I thought it would, but just like any opening? our second day we ran out of hot dogs. We ran out of buns, too. What we had projected we would sell, was not nearly what we actually did sell.

So there was already a demand from day one? JS: Yeah, there was a lot of buzz. Before we even opened, we were selling our dogs at Citi Field. I used to work with a chef at Café Gray, who was working with Danny Meyer, and they brought us out to do a hot dog stand, and we had some buzz from that. But the opening was? as messy as any opening. As much as you can plan how things are going to go, and how service is going to go, and how you’re going to pick up tickets, and how you’re going to bring it out, it’s never the way you think. We were originally calling people’s names out for the orders, but the room was so packed, no one could hear their names. But, all in all, the transition has happened a lot faster than I thought.

Did you have the staff you wanted from the start? JS: We had a lot of staff. We had more staff when we opened than we do now. We also were doing breakfast every day when we opened, now we just have it on weekends. But we had like 22 people on staff.

But you stopped doing breakfast during the week? JS: We had designed the breakfast menu to be something of a grab and go thing? it was really modeled after McDonald’s breakfast — ham, egg and cheese — and we wanted to take that and make it good. I don’t think Park Slope was really the area for us to start breakfast. We have really great coffee, and sandwiches, and actually our busiest time of the week is breakfast on the weekends, but we were losing money. BG: The timing just wasn’t right. For us when we opened in mid August, we missed the tail end of the summer. You want to build your business through the summer, because what we do is kind of seasonal. But it’s worked out really great for us in the winter, and hopefully when we move forward in the future, it will be something that we’ll be able to do full time.

How did you feel about the instant reactions from the food blogs? BG:It’s a little scary opening nowadays, because what you open is out there, posted, blogged about, talked about, and you really have to be on your game when you open. It’s a good thing and a bad thing. Like, you have to open and really be on top of your game, but it also doesn’t give you that fair shot to grow into yourself. JS: It’s also, you know, it's two fold. Not only did we experience that, but also Brandon and I come from restaurants where you serve food to people who usually don’t know what’s going into it, or how you made that confit or roasted that squab. But here, everyone’s an expert on hot dogs. Everyone in America knows how a hot dog should be. A customer would never come to a chef in his outfit, and say, “that’s not the way you cook squab.” That would never happen, but on a daily basis, people say, “a hot dog should have a poppy seed bun, or the sauerkraut should be different.”

It sounds like you were aware of everything people were saying about the place. BG: Yeah, you definitely get a thick skin. JS: At the end of the day you really have to believe that what you’re doing is the best that you can do, and not veer off of that. You need to take everyone’s opinions, and gather the ones that you think can help, but we really believe that we have a good product, and that we’re putting it out there the right way. It wouldn’t help us to take every opinion, and every blog post and just run with it. We’d have a scatterbrained business.

One year in are you comfortable with how the menu has evolved? JS: I don’t know if we’ll ever be comfortable. There are always things that need to be changed and fixed. BG: I think in terms of the workload, it’s gotten a lot better for the both of us, but you know, it’s a constant improvement process. It’s one year in, and now everything’s breaking, which is pretty typical. It’s a part of the business, there’s a lot of moving parts, and occasionally those parts wear down or break down.

Are you both working the line as much as you were when you opened? JS: Not nearly as much. We started out on the line, everyday, all day long, and we quickly realized that’s counterproductive to our business. But we’re still on the line every day, not nearly all day long, but definitely every day. But I think that until we find the right fit, we’ll still be there on the line.

What’s next for Bark? BG: Taxes, taxidermy and organic hair dying. JS: And we’ll also serve fried chicken. Inside of donuts, as a sandwich. That’s our business plan. No, we’re looking to expand — we’ve got a few more things that we’ve got to work out. And we need to really make it as streamlined as possible, but, this is an "economy of scale" type business. We could expand, and I’m sure that it would be okay, but to do it the proper way, we need to make sure we’ve got our ducks in a line.