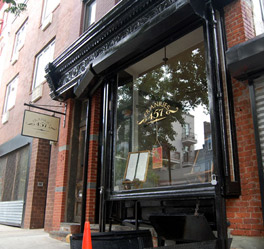 The duo of Frankies—one at 457 Court St., the other at 17 Clinton—taps into every New Yorker’s nostalgia for the red sauce joint. That life or death yearning for garlic bread, meatballs, eggplant parm, and warm, anonymous Chianti poured to the brim of a miniature goblet. That urge to dine at a place where it’s perfectly normal to tuck your napkin into your shirt collar and spill your wine. Somehow, the Franks have managed to dress up Italian American cuisine without forfeiting that sentimentality. And the wine lists—despite the exclusion of tepid Chianti—are adventurous, affordable, and inviting. However, it’s not what’s actually on the lists that make them so admirable—there are more interesting Italian lists of this size around—but rather how well they compliment the philosophy of the restaurants. Both lists simultaneously manage to provide an unconventional experience for well-versed winos, while also keeping the less fluent from feeling left out. In other words, it’s a place where wine hipsters, broke musicians, and stay-at-home moms can co-exist, drinking carafes of Rosso Conero with food that hasn’t forgotten the simple pleasure of Parmesan.

The Frankies in Carroll Gardens is helmed by Otto and Del Posto alum Jon Feldman, who keeps the modest 62 selections in Italy, traversing the boot tip to top to provide safe havens in Tuscany and Piedmont for those not keen on taking the roads less traveled. Twelve wines are offered by the 500ml carafe and range from $12-$30; the majority of the list overall falls under $50. The same is generally true for the Frankies of the Lower East Side. The only striking difference is that GM Sean Hill has taken a step outside Italy with the curious inclusion of 5 wines hailing from Argentina, Chile, and France—none of which make any sense. So steer clear of Patagonia and instead knock around in Italy; you’ll end up with the same sense of elation at having just sincerely enjoyed a cheap bottle of wine and bowl of pasta at a place where tucking your napkin into your shirt really isn’t out of the question at all.

Teroldego 2007, Foradori $45
Teroldego is one of Northern Italy’s unsung heroes, an indigenous variety that nestled itself into the foot of the Dolomiti Mountains around the early 1800s. It’s often likened to Zinfandel, but it’s higher in acid and, well, different. Foradori is the leading producer in Trentino, and this entry-level ditty is an excellent intro to the grape.

Crowd Pleaser
Frappato 2009, Valle Dell’Acate $45
This light, shamelessly catchy wine from Sicily is one of the great Italian reds for summer. Ask your server to throw a chill on it.

Off The Beaten Path
Oz 2004, Zyme $87
Secret label from Marion’s winemaker (who learned how to turn tricks from the Veneto’s two greatest producers: Dal Forno and Quintarelli). This is the only known solo bottling of Oseleta—a rare and generally blended variety native to the Veneto—on the planet. Rustic, earthy, and decant-worthy.

Break The Bank
Ca del Merlo 1998, Giuseppe Quintarelli $115
Guaranteed swoon from the master of the Veneto region. One of Italy’s great artisans presents this full-bodied wine vinified via the Ripasso method (i.e. juice is re-passed over the pomace of the partially-dried Amarone grapes to add depth and richness). Singular, crucial wine priced right at retail cost.

WTF?
Montepulciano d’Abruzzo 2007, Zaccagnini $34
Massive producer putting out large quantities of this laughable hologram of Montepulciano. Even at this price point, one can find plenty of other worthwhile wines, many of which are already on the list. Next.

Frankies 17
Bang For Your Buck
Pigato ‘Le Russeghine 2006, Bruna $55
One of the great Ligurian masterminds. Commonly mistaken for a margarita (rocks/salt). In lieu of tacos, pair with aquatic things.

Savuto 2005, Odoardi $38
Another awesome Gaglioppo from Calabria. The Odoardi family has been making wine in this menacing terroir for more than 500 years, and this outcome is characteristically opaque, but lithe and versatile.

Crowd Pleaser
Primitivo 2007, Cantele $27
Another version of Cherry Kool-Aid for adults, but in a good way. Order things. Drink. No brain power need be exerted.

Off The Beaten Path
Santa Chiara 2007, Paolo Bea $55
A fantastic and somewhat challenging wine from one of Italy’s most iconic artisan producers. Long macerations and minimal intervention give way to a freaky orange wine that is all nuts and earth.

Under $40
Lacrima di Morro d’Alba 2008, Velenosi $35
The Lacrima grape is an ancient variety that it only produced in the commune of Morro d’Alba its neighboring communes within Le Marche. Sports one of the most distinctive noses of any Italian varietal (smells, freakishly, of C. Howard’s Violet Candy) and is about as singular as it gets in this price point.

Break The Bank
Barolo ‘Sarmassa’ 2001, Bergadano $100
Small, traditional under-the-radar producer putting out value-driven Barolo from one of La Morra’s great cru vineyard sites. Still a bit young by Barolo standards, but will show well with a shake in the decanter.

WTF?
Cabernet Sauvignon ‘Malma’ 2005, Bodega NQN $30
Get out of here random Chilean Cab: you have no business in this place.