Every day this week, we'll feature a Shitshow Week Review—a new assessment of a restaurant that at first glance seemed totally and completely off the rails. To give these places a fair shake, we revisited to pass new judgment. The first review is sadder than we originally intended. 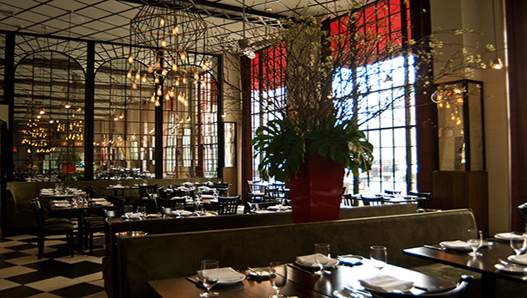 Bar Artisanal Restaurant and Tapas Bar has been more things in its short star-crossed life than most restaurants will ever be in their long and uneventful lives. For a red hot tittie second it was Trigo, a Mediterranean joint. When that failed, Terrence Brennan was summoned like a locavore restaurant djini to remake the place as Bar Artisanal, a downtown offshoot of his respected 33rd Street fromagerie. When that soured, Brennan remade it a la espanola as Bar Artisanal Restaurant and Tapas Bar, a cacophonous wonderland of tapas and last gasps. The third time, sadly, wasn’t the charm.

BARTB has never suffered for lack of decor. The space — though poisoned— is sweet and picaresque. Trigo was lovely and BARTB, with its waiters bowtied, chandelier full of honey colored Edison bulbs and checkerboard tile floor, is as close to a black velvet painting of a Catalonian bar as you’ll find this side of the Atlantic. It’s pretty under soft light but the picture gets fuzzy upon further inspection. Perhaps the first whispers that BARTB has not escaped the shitshow fate of its earlier iterations was heard in the music piped indiscreetly from a set of speakers onto the street. When we arrived at 8:45 PM on a Thursday, that great Spanish anthem Have Nagila! set atop a hip hop beat was blaring. Inside, an attractive hostess greeted us nicely and ushered us through a throng — yes, even restaurants in their dying throes have throngs – of men in blue spread collar dress shirts and pleated khakis. The men, ostensibly speaking with each other, used their conversations as cover as they peered out over the tops of their wine glasses like lions at a watering hole, identifying by length of neck and plunge of décolletage which of the rare unprotected women would be their prey that night. Upon being seated, next to a date that was going very poorly, a small young Russian waiter hurried over. “Do you know what you would like?” he asked. We don’t have menus, we replied. “Oh, I’m sorry!,” he said and scurried away.

By the time he resurfaced — fifteen minutes later — we had ordered drinks from one of the sundry well-intentioned people who work at BARTB— maybe a manager? — either unaware or resigned that the ship was on its way to Davy Jones locker and they were doomed to go down with her. We tried, perhaps unwisely, a pitcher of the hot & spicy sangria with white wine, jalapeno and lime. It came rather soon thereafter, a pitcher so crammed with jalapeno that every sip was like getting punched in the kisser with a pepper. “Ouch” my wife said, “my face hurts.” “Ouch” I said, “mine too.” After spotting it on other tables we asked a nice mustachioed busboy, a Hispanic man in his 40s, for bread. Bread came then but no olive oil. Olive oil came but no bread plates. We left crumbs on the table and the couple next to us left. The waiter, ever eager, reappeared. “What would you like?” the waiter said, his vowels marked by the plaintive guttural whine of the native Muscovite and his eyes wide with fear of a waiter on a sinking ship.

In the interest of scientific inquiry, we ordered two tapas, both variations on potatoes. From the classica side we had the patatas bravas; and its moderna equivalent, described on the menu as potato foam cone with caviar. For main courses, I had the steak. Anawife had the skate. The waiter — meanwhile — had a hard time. “So, two steaks.” Nope. “Two skates.” Nope. “A skate for you and a steak for her?” Almost. “Steak for me; Skate for her.” Beads of sweat glistened under the suddenly sordid Edison bulbs. “I’m so sorry,” he said and scurried away.

The potato cone of foam came way late, a starchy mini sugar cone of potato stuck in a clear acrylic donut that looked like an ice cube. It tasted exactly as good and fun as described. A mote of caviar rested on top. It was $15. The patatas bravas were ok, I guess. Our waiter left for a good forty five minutes. Had he quit? Had he had a nervous breakdown? Whither our entrees? They and he returned eventually and to their detriment. My steak — strips of dead tire — beat out Anawife's skate, a scary large smile of bland chewy fish. It lay on her plate, flat yellow fan of fish in a brown sauce of identifiable spice. It grimaced from its plate up at us, eager to please.

I peed later in the bathroom. The music was too loud. The toilet paper too out. Paint on the ducts. Blood in the water. It was the bathroom of a slapdash makeover, unkempt and poopy smelling. When we left, we left the skate still on the plate, a portion too large of a quality too poor, a cheery doomed dinner in a dying restaurant. We paid a usurious bill — $132 for a night of sadness— and walked out into the night. Behind us, the Russian sweated under the Edison bulbs and the hostess was fending off the now-desperate now-drunk bar patrons. It was a terrarium of terror, a sad suffocating tableaux. We inhaled deeply the exhaust of Holland Tunnel traffic and smiled. At least we were alive.