Trestle On Tenth: One of the Finest Featherweight Lists in NY

Share All sharing options for: Trestle On Tenth: One of the Finest Featherweight Lists in NY

Welcome to Eater's column, Decanted, in which WineChap's Talia Baiocchi guides us through the treacherous world of New York wine lists. Today, Trestle on Tenth. 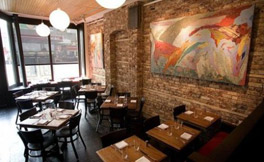 Trestle on Tenth is one of those places you always intend to visit more frequently, but rarely do. It's that spot you wish you’d thought of when you were stranded in Chelsea and couldn’t figure out where to eat. Somehow, it remains quiet on the scene despite the decibel level of Ralf Kuettel’s Swiss riffs on pork standards and his preference for wines that require a warning label (in this case, a skull and crossbones).

The sleeper status of Trestle sort of suits Kuettel, though. He’s congenial, but direct. No question causes him to feel conflicted; the answer is always simple. His wine list has the same sort of candor. It is unwavering in its dedication to Old World wines made traditionally—many of them employing minimal intervention—but not because those wines are considered trendy within the industry or because he wishes his list to reflect a movement or make a statement. They’re present because Kuettel has a preference for them; they’re the producers he’s connected with in his travels or perhaps more simply put: they’re the wines he likes to drink.

But many assume (including Adam Platt, in his review of the restaurant back in 2006) that because Kuettel is firstly a chef and his wife just happens to be Juliette Pope—the fabulously talented Wine Director at Gramercy Tavern—that Trestle’s well-edited homage to the dusty far flung domaines of the Old World, as well as a few from the New, is hers. Kuettel isn’t bothered by this assumption, but he humbly denies it. He did, after all, spend four years at Chelsea Wine Vault during his hiatus from restaurants, two of those years as a buyer—more than enough time to define his preferences.

And so they go:

The lunatic periphery moonlights, the classicists dominate. The New World gets a nod, but the wines are restrained. Kuettel hails from Switzerland, so there’s Swiss wine, the prices of which he knocks down enough to urge them into consideration. The aforementioned skull and crossbones marks those wines made in “an ultra traditional style” in order to ensure that someone looking for Sauvignon Blanc doesn’t accidentally order Savagnin and flip out. The 80-100 selections rotate frequently, and they sport markups that compete for the lowest in the city, not to mention there’s always a gaggle of ultra-geeky rarities on the top end. This list is short and obscure, but curiously disarming. It’s easily one of the finest featherweight lists on our little island.

Bang For Your Buck
Côte Chalonnaise ‘Les Clous’ 2007, A. et P. de Villaine $51
Aubert de Villaine is co-owner and co-director of none other than one of Burgundy’s most prestigious and storied estates: Domaine de la Romanée Conti. Though hardly a necessity, Aubert and his wife Pamela have decided to make some wines for the people. This particular wine hails from one of several holdings in Bouzeron, and is fresh like Downy.

St. Laurent ‘Classic’ 2007, Umathum $45
St. Laurent is certainly having a moment. This aromatic dark-skinned grape, grown primarily in Austria, is in the same family as Pinot Noir and is a nightmare to cultivate. If it weren’t for exciting wines like Umathum’s that make this grape well worth fussing with, natural selection would have trampled over this particular fruit long ago.

Chinon ‘Les Clos Guillot’ 2006, Bernard Baudry $57
Baudry is one of the great all-around wine producers, and his wines are laughably cheap for the kind of singularity and balance they express. The Clos Guillot is one of his two top cuvées grown in clay and limestone soil. Plenty crunchy as a result, but it has the fruit density to make it particularly disarming.

Lagrein ‘Berger-Gei’ 2006, Ignaz Niedrist $62
The Lagrein grape, indigenous to Alto Adige, generally produces the kind of wine dark enough to get lost in and beefy enough to bore through sausage, and Niedrist’s Berger-Gei is one of the finest examples of the variety. A rewarding wine for those who don’t mind being shoved around a bit.

Off The Beaten Path
Heida Visperterminen 2007, St. Jodernkellerei $69
Visperterminen (what?) is a village within Valais, Switzerland’s most famous winegrowing region. The vines thrive here at altitudes of 3,300–4,000 feet above sea level, making these some of the highest vineyards in Europe. The Heida grape (said to be related to the Jura’s Savagnin) is among the rarest varieties in production.

Torrette 2007, Franco Noussan $52
Franco Noussan is literally a “garagiste”; his cellar is a cave built into a hillside through his garage, and it’s here that he tends to a handful of small production bottlings, including this Torrette—a blend of Petite Rouge, Mayolet, and Cornalin, all sourced from vines over 40 years old. Lean, earthy Vallee d’Aosta yum.


Crowd Pleaser
Favorita 2008, Malvira $43
Malvira is a small traditional winery out of Roero DOC in Northern Piedmont and one of a limited number of producers exporting this snuggly-named grape variety. Brisk, floral, and sluggable.

Valpolicella Classico 2008, Monte Dall’Ora $38
Welcome to the livelier side of Valpolicella, the region most famous for Amarone, Italy’s king of wine burliness. The same traditional varietals go into the region’s Classico wines, but instead of being vinified from dried grapes or passed through the must of them, the Classico, from this excellent small producer, is all charm and no burl.

Under $40
Grüner Veltliner 2008, Loimer $39
GruVe is often our go-to for value white wine, as most of the stuff that actually makes it here is of reliable quality. Plus, when the uniqueness of the grape is intact, it has a penchant for being food friendly. Loimer’s entry level ditty is no exception. Good. Drink.

Blaufränkisch 2006, Wenzel $39
For an all-Austrian themed quaff for under $40, we present this fine little entry level Blaufränkisch from Wenzel. It sees no oak, and has a bit more wisdom than its price tag would suggest, thanks to 3 years in bottle. The ideal introduction to Blaufrank.

Break The Bank
Provignage Pré-phylloxérique 2006, Domaine de la Charmoise (Henry Marionnet) $99
Sourced from vines planted some 20 some-odd years before phylloxera, this wine is made from some of the oldest vines in France. As a result, this 100% Romoratin is super concentrated, thick, slightly oily, overwhelmingly expressive, and super special.

Boca 1985, Castello Conti $126
The Boca DOC is a tiny appellation in northern Piedmont in the province of Novara where less than a handful of winemakers make wine under the DOC label. The DOC allows no less than 45% and no more than 70% Nebbiolo, with the remaining percentage consisting primarily of Uva Rara or Bonarda Novarese. Here we behold a library release from the excellent ’85 vintage and a rare chance to drink a Boca wine.

WTF?
Not much of anything to swing a bat at here, but if anything the 2005 Chandon de Briailles Corton Blanc could use a little more beauty sleep.