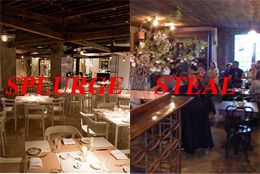 5) ABC Kitchen/The Smile: The eco-chic dining room and expansive menu of creative, market-inspired American food at Jean Georges' newest baby are hard to match, but for a comfort food fix with a rustic kick, head to the Smile in NoHo. Like the JGV restaurant, this home furnishings/clothing store turned cafe serves a menu of ingredient-focused, simply prepared but elegantly composed dishes, many of which are perfect for sharing. Even at dinner, the big proteins like the lamb meatballs or roasted chicken hover around the $16 range, and most apps are half that price. And like that Vongerichten restaurant, the dining room has a comfortable, if somewhat ragged, hodge-podge feel. [Read More: ABC Kitchen, The Smile] 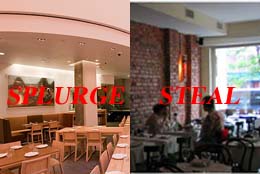 4) Ma Peche/Omai: David Chang's Mitown foray into French-Vietnamese cuisine isn't quite like any other restaurant in the city, but for those seeking inventive Southeast Asian fare in a casually elegant, chic dining room, Omai is a solid, affordable option just a quick train ride away in West Chelsea. The menu is studded with a mix of fresh, well executed Vietnamese classics, and several dishes that update the traditional recipes with modern twists, like shrimp ravioli with fried shallots, and a grilled calamari with tomato, cucumber and a tamarind vinaigrette. You won’t find Ma Peche’s majestic Beef 7 Ways here, but facsimiles of many of that meal’s courses, including the sliced beef and basil salad, a brothy oxtail dish, and seared sirloin, can be ordered a la carte. All entrees are well under $20, all apps are under $10. [Read More: Ma Peche, Omai] 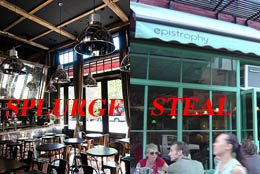 3) Locanda Verde/Epistrophy:Locanda Verde, Andrew Carmellini’s perpetually crowded Tribeca restaurant, offers some of the finest rustic Italian food in the city, in a very cool, detailed space. But for those that want to eschew the wait for a table, and enjoy some sturdy, traditional primi and secondi at nearly half the price, Epistrophy in SoHo is an excellent alternative. Like Carmellini’s semi-fine dining restaurant, all the salads, pastas and mains are full of distinctly Italian flavors and ingredients, and while the pastas and starters are the things to get and share here, those seeking heftier fare won’t be disappointed by the braised short ribs, and baked eggplant. Like Locanda Verde, Epistrophy serves an Italian breakfast, the room has a chic, brassy charm, and the clientele is generally very, very attractive. [Read more: Locanda Verde, Epistrophy] 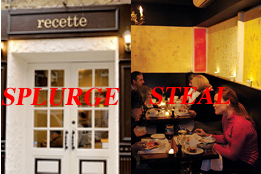 2) Recette/The New French: West Village newcomer Recette has received high marks for its inventive, vibrant French and American fare, and although no dish on the menu is over $30, some have complained the nature of the menu, namely lots of plates to share, can add up pretty quickly. For those looking for a less expensive dinner at an intimate West Village bistro, with a chef driven menu full of bright flavors, The New French is the place to go. Here, in addition to more serious comfort food like moules frites and a serious burger, the menu features several market inspired salads and starters, a few excellently composed vegetarian dishes, and mains that incorporate housemade charcuterie. Most entrees are under $20, many are under $15, and even the most simple dishes are served with a few unexpected twists. [Read more: Recette, The New French] 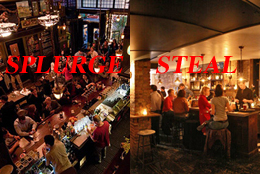 1) The Breslin/Wilfie & Nell: You won’t find the Breslin’s lamb burger or rib eye for two at Wilfie & Nell, but if you want some well crafted artery-clogging English pub fare in a pleasantly boisterous room, this West Village pub is a solid choice. Even if it's more of a bar than a restaurant, the food at Wilfie & Nell is surprisingly good, and more faithful to the flavors of English cooking than a lot of other trendy restaurants bearing the Gastropub moniker. Standouts like the corned beef sandwich, cheese boards and salads are all under $12. If you go with a group of friends, with the intention of having a few rounds and trying a lot of bites and snacks — like a lot of people do at the Breslin — it’s a great night out, especially for the price. [Read More: The Breslin, Wilfie & Nell]

· The Last Edition of Splurge/Steal [~ENY~]