Share All sharing options for: 10 Talking Points in the NYC/SF Restaurant Rivalry

About every month or so, the age old argument over which city, San Francisco or New York, has the better food gets stoked — whether it's because of comments made by chefs, or in the case of those French mischief makers at Le Fooding, an actual event staged to pit the two against each other in a culinary throw down. The fact is that both cities are two of the best in the country for dining, and that each excel in certain areas where the other doesn’t. For the sake of conversation, here’s a list of five dining categories where NYC trumps San Francisco, and five where San Francisco schools the Big Apple. 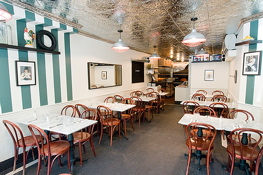 5) Pizzerias: We’ve got more pizzerias, and more varieties of pie than San Francisco, and some are among the best in the country. But, what’s more, over the last five years or so, the rise Neapolitan pizzerias like Motorino, Roberta’s and Keste have also created a new distinctive dining option in New York, where pizza may be king, but there are enough other inexpensive menu options to appeal to diners on many levels. SF’s caught this Neapolitan bug too, with places like Tony's, Pizzeria Delfina and Flour + Water, but these days, you can find some version of this style of pizzeria/restaurant in any neighborhood of the New York, and that’s a great thing. [Photo] 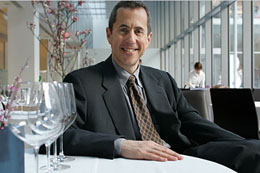 4) Danny Meyer: Danny Meyer has a golden touch with dining concepts that offer great food in comfortable spaces, where value is built into the menu, and the service is effortlessly accommodating. But the fact that we have so many of his restaurants to choose from isn’t the whole reason he’s such a great asset to our dining landscape: the veterans both from his front of the house and his kitchens take the same dedication to craft and service elsewhere to smaller, more idiosyncratic projects that often times become equally as beloved as his bold faced restaurants.[Photo] 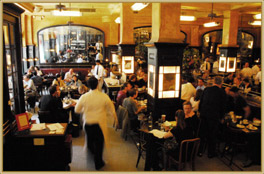 3) French Food: We’re crazy for comfort food in New York, but one of the varieties we do the best is calorie rich, French fare. From little bistros to lavish fine dining palaces, New York has tons of French restaurants that are perfect for a fun date, a casual glass of wine and steak frites at the bar, or a splashy, indulgent night on the town. Although French cuisine is definitely part of California Cuisine’s DNA, somehow the left coast just doesn’t knock it out of the park in terms of sizzle, sauce and sexiness the way we do here. [Photo] 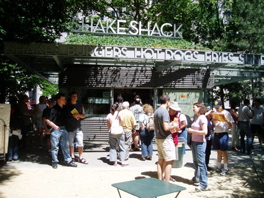 2) Burgers: Yes, SF’s got In-n-Out (but only, like, one location) and a few notable "$16 burgers", but New York is committed to improving the hamburger landscape, and making the sandwich as widely available as possible. Generally speaking, New Yorkers are a pretty stressed out bunch, and pretty big drinkers, so the fact that this supreme form of comfort food can be found at many, many places where you can also down a beer or sip a cocktail makes perfect sense. And, like pizza, the fact that there are so many burgers around creates a healthy competition, so there’s a strong chance that a burger at an average pub will be better than an average pub burger. [Photo] 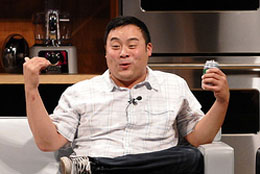 1) The David Chang Factor: The Momofuku restaurants are truly popular, and beloved by many New Yorkers of all ages and income brackets. But Chang’s work in the past four years is noteworthy not only because of its popularity and the accolades it has received, but also because of the way that it has opened doors for other similarly young but experienced NYC chefs either directly connected to the Empire of the Peach, or via a shared culinary ambition. The Momofuku model of a casual restaurant, in a hip location, serving personal and inventive food with a bit of sizzle, has become easy to understand to diners and investors alike, and paved the way for some of the great, smaller restaurants of the last few years. [Photo]
Five Areas Where San Francisco Dining is Better than New York Dining: 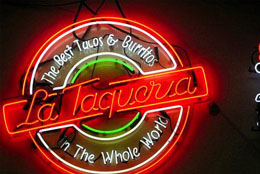 5) Mexican Food: Mexican food in San Francisco is fresher, tastier, cheaper, and more readily available than it is New York, end of story. The independently owned fast casual burrito shop is one of the most standout dining cultures in San Francisco as it appeals to basically everyone, and is available in almost every neighborhood. Our attempts at recreating it — Dos Toros, we’re looking at you — just don’t come close to the real thing. We may never win this battle. [Photo] 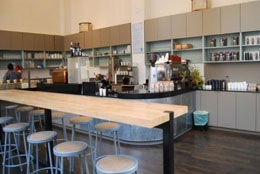 4) Coffee: New York coffee is getting better and better everyday, but the coffee scene still can’t hold a candle to what’s going on — and been going on for a long, long time — over in San Francisco. Certainly SF has hatched its fair share of big innovators over the past few years, but on the whole all coffee — at a diner, at regular restaurant, at an undistinguished café — is stronger, smoother, and more flavorful than ours generally is. Also, one of the annoying side effects of getting 'serious coffee' places in NYC like Stumptown, is that these places put so much emphasis on where the beans are from, the terroir of the coffee, the masterful skills of the barista, sometimes instead of how the product actually tastes. It's a pretension that’s mysteriously absent in a lot of the great coffee spots in SF. Perhaps, on our end, it’s a form of overcompensation. [Photo] 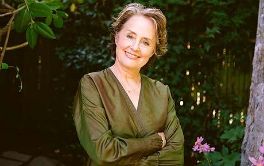 3) The Alice Waters Factor: Alice Waters’ hippy dippy earth mother persona is easy to make fun of, but the movement she inspired, that notion of simple, fresh food informed by French technique and European sensibilities, is something that Bay Area chefs apply to spectacularly satisfying effect. As greenmarket-centric as we are here in New York, often times this leads a lot of the overachieving chefs of the city to creating dishes with ingredient dogpiles, and overtly angular flavor combinations that don’t work. It’s a hard balance to strike, and frequently, we don’t nail it. [Photo] 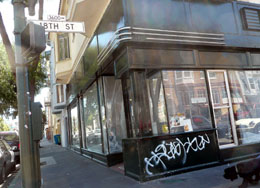 2) Breads/Pastries: We’ve got tons of sweets shops, and solid ethnic bakeries, but our celebrated bread places in NYC usually operate one or two storefronts, and do the bulk of their business with restaurant wholesale. The number and quality of independently owned bakeries in San Francisco trumps NYC, hand down. [Photo] 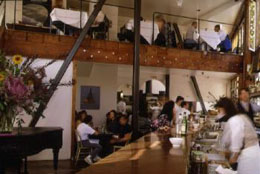 1) Endurance: Many of the big chefs and restaurateurs in NYC seem hell bent on expansion, branding and diversifying their offerings outside of the city, or completely abandoning their projects when the trendiness of their concept dies down and they get offered more money for less work elsewhere. In San Francisco, many of the big restaurant personalities build a reputation on doing one thing, often highly idiosyncratic, at times hard to classify, and doing it for many years, often in the same location. Even if restaurateurs like Charles Phan, Gary Danko, or Michael Mina do open up new restaurants, they maintain popularity on a level where diners essentially get to trust them as they would their friends. For this reason, you'll see their restaurants regularly make 'best of' lists, year after year, whereas roundups of New York restaurants frequently emphasize the new, the hot, and sometimes the flash-in-the-pan.[Photo]