Welcome to Eater's column, Decanted, in which WineChap's Talia Baiocchi guides us through the treacherous world of New York wine lists. Today, Dovetail. 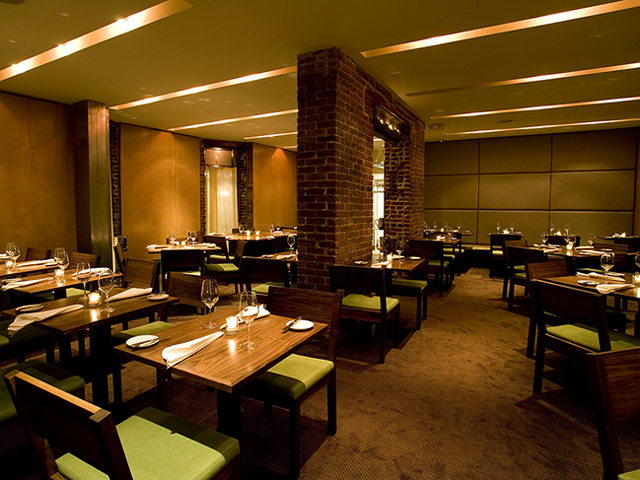 The Upper West Side is hardly thought of as a food destination, but rather a place where old money goes to die quietly and newlyweds go to make babies. There are a lot of bad brunch spots with sidewalk cafes fenced in by Bugaboos, great bagels, and Levain, but there isn’t a whole lot that inspires those below 14th St. to hike north for dinner. But in 2007, Chef John Fraser opened the doors at Dovetail to an immediate onslaught of press and caravans of New Yorkers suddenly willing to go out of their way. For those in the area, it was a culinary Mecca of sorts, and for those further afoot, it was a sign that this neighborhood was possibly making a serious move. The food was exciting and ambitious, but the wine list was not. It was predictable, expensive, and—despite the fact that there were some great wines to be extracted and some solid selections under $75—there wasn’t a whole lot that would qualify it as interesting.

But when Amanda Reade Sturgeon, the current Wine Director, took the list over in October 2009, she promptly ripped up and tossed out the large producers that dotted the list in favor of smaller, family-owned estates that still make wines traditionally. Reade Sturgeon’s experiences in the Napa Valley—she was a cellar peon at The French Laundry and Sommelier at Martini House—play out at Dovetail via an informed collection of off the beaten path CA wines. In other words, La Crema Chardonnay and Silver Oak Cabernet get the boot for producers such as Lioco, Tenbrink, Hansom, and Edmunds St. John—all of which are making more restrained, terroir-specific wines.

A good portion of the list also takes a measured turn for the quirk, but not without being mindful of the restaurant’s demographic. Reade Sturgeon has suggested that the clientele is still dominated by the aforementioned geriatric crowd, who remain baffled by the fact that there isn’t any Pinot Grigio by the glass. But she still insists on taking calculated risks; she highlights the often polarizing wines of Fiorano, Henri Milan, Gravner, and Domaine de la Charmoise, among others, but she takes the time to provide background information on those that are particularly confounding, so as not to invoke any seizures.

Dovetail’s drastic list refurb makes it among the most improved of 2010, but that doesn’t mean it’s without its faults, however residual. The list’s markups are still a tad higher than standard, and the Bordeaux and Burgundy sections are barely worth pausing for unless you’re playing with an expense account. Red Burgundy is long on trophy Grand Cru Côte-de-Nuits from the likes of Leroy, Dujac, Jayer, DRC, etc., with more wines in the four digits than in the threes. Only one 1er Cru wine lurks here: L’Arlot’s Clos des Forêts Saint Georges from 2007, a brilliant wine, but one that is not yet worth opening at $213. As expected, the red selections from the Côte de Beaune are not quite as highbrow, but there is still very little that excites. Steer clear of these sections until they become a bit more democratic and in line with the ethos of the rest of the list, and lurk around some of the farther flung wines from Southern France and Italy.

So, despite being a bit highfalutin at times, as a whole Dovetail’s current list is an incredible improvement from what it was a year ago; it has personality and purpose, and it’s bound to continue to evolve no matter how many neighborhood old-timers or Bugaboos stand in its way.

Bang For Your Buck
Reuilly Pinot Gris 2008, Denis Jamain $40
Vinified from Pinot Gris grapes that turn copper in the autumn, Denis Jamain’s Pinot Gris is a light coppery pink and tastes of doilies (delicate, but intricate enough to be interesting), rocks, and garden. Friendly with ocean-faring animals.

‘Les Cépages Oubliés’ 2008, Domaine de la Charmoise $59
Domaine de la Charmoise is home to Henri Marionnet, one of the Loire’s great winemakers and a steward of the region’s most obscure grapes. Les Cépages Oubliés translates to “forgotten vines” and is made from 100% Gamay de Bouze, a rarely vinified variety (hence, the name). This is definitely a wine of terroir, made with minimal intervention. Fresh and mineral-driven. Lots of love for minimal coin.

Chardonnay 2007, Tenbrink $68
The Suisun Valley is a mildly obscure region between San Francisco and Sacramento where CA’s pioneering madman, Abe Schoener, has shacked up with Steve Tenbrink to explore the AVA’s terroir. The wines are fermented using native yeasts, minimal sulfur is added, and in 2007, the wine was aged in neutral barrels with extended lees contact. Yeasty, trippy, fruit-forward.

Riesling Spätlese ‘Rüdesheimer Berg Rottland’ 1996, Schloss Schönborn $80
An excellent estate in the Rheingau with a long history of quality wine production—the family can trace its winemaking roots back to the 14th century. This excellent 1996 vintage is likely just coming into its own.

Côteaux Varois en Provence ‘Clos de la Truffière’ 2004, Domaine du Deffends $48
A small, traditional family operation in Provence, brought to us courtesy of the famed importer Robert Chadderdon. A blend of Syrah and Cabernet, with a lot wisdom and complexity for this price point.

Beaumes-de-Venise 2004, Château Redortier $60
Some of the most elegant Beaumes and Gigondas hail from this traditional estate. Known for the swearing off of all wood-aging and the strong presence of Syrah in his blends, Redortier’s resulting wines are a little more polite than most from the area.

Off The Beaten Path
Le Grand Blanc NV, Henri Milan $87
A member of Nicolas Joly’s “Return to Terroir” group of winemakers (and designated as such on the wine list) who are dedicated to biodynamic principles and have vowed to make wine using non-interventionist principles that they believe will allow each appellation to best express itself. Le Grand Blanc is an unorthodox blend of Grenache Blanc, Chardonnay, Rousanne, Vermentino, and Muscat, grown in blue marl soil (the same soil found in many top Chablis sites). The wine is slightly oxidized, intensely aromatic, and mineral-driven. One of the most stunning artisan efforts out of S. France.

‘Over & Over Variation 3’ MV, Channing Daughters $78
From the most experimental winery in NY State. A motley blend of Merlot, Dornfelder, and Syrah made via the very unique “Channing-style” Ripasso method, i.e. the barrel-aged juice is passed over the fresh to incite another primary fermentation?three times (hence, Variation 3). In total, the wine goes through four primary fermentations and four malolactic fermentations and is a combination of four different vintages. Whew.

Under $40
‘Toh-kai Exto Gredic Vineyard’ 2008, Quattro Mani $32
Quattro Mani, which translates to “four hands,” is a project developed by importer Paolo Domeneghetti of Domaine Select Wine Estates that includes four different artisan winemakers who have collaborated to make affordable terroir-driven wines. This is 100% Friuliano (formerly known as Tocai Friulano, before Hungary had a complete breakdown over the name) from Slovenia made by the famed Ales Kristancic of Movia. Unfined, unfiltered, and with intact Movia-esque funk.

Marcillac ‘Lo Sang del Pais’ 2009, Domaine du Cros $36
Vinified from 100% Mansois grapes (a.k.a. Fer Servadou) in Marcillac, a region whose wines rarely make it outside the region. The Lo Sang del Pais translates to “the blood of the soil,” and this is all rustic, kicked-up-dust, with dark fruit and bloody meat. Kaboom.

Crowd Pleaser
Breganze Vespaiolo 2009, Contra Soarda $49
This 100% Vespaiolo is vinified from a grape native to Breganze, a growing area within the Veneto region. Medium bodied, fruit-forward, and totally casual.

‘Stiglianese II’ 2003, Az. Agricola Fontanelle $53
Fruit-forward Sangiovese from a warm year that will not piss anyone off.

Break The Bank
Grüner Veltliner ‘Solist’ 1990, Kirchmayr $190
Old GruVe from one of Austria’s elite. Aged in large oak barrels with extended lees contact, this is all minerality and a solid core of GruVe fruit.

Taurasi Riserva ‘Radici’ 1999, Mastroberardino $152
The benchmark for Aglianico in Campania. Beautifully integrated and bursting with dust and minerality. If there is any bottling that warrants the Aglianico’s designation as the “Barolo of the South,” it is this wine.

WTF?
Toro ‘Termanthia’ 2005, Numanthia Termes $375
In praising Termanthia Wine Spectator called it “?so thick and rich it's almost oily in texture” and Parker gushingly deemed it a “thermonuclear fruit bomb.” Great if you’re trying to develop alternative fuel, nauseating in the context of wine. Doesn't belong on this list or, from what Parker suggests, near children.