Noted mixologist and fire lover Albert Trummer is really psyched to open Theater Bar, his latest project in Tribeca where Trummer intends to "create a new kind of show bartender who belongs to New York City." Trummer tells the Wall Street Journal that as the producer of the nightly show, he will have each act be a different part of the menu, explaining that "the whole bar is a performance, with four to five bartenders, shaking, mixing and squeezing. It's almost like 'Top Chef.' " Oh goody! Like every other project, Trummer is planning on opening Theater Bar in time for Fashion Week, but was kind enough to recently host a preview party for Libby Keatinge. 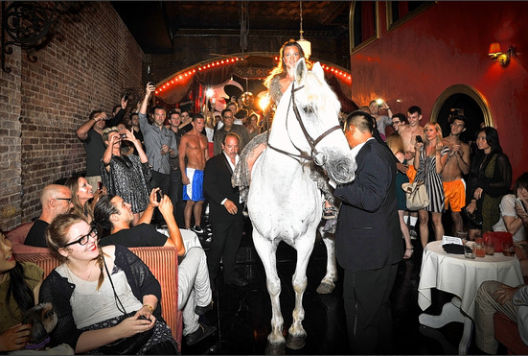 Trummer's production for Ms. Keating was a Studio 54 themed bash, where shirtless bartenders served guests dressed in glittery clothes. And to top it all off, the birthday girl rode in to the bar on a white horse (pictured). If it was our party, we would definitely demand that Trummer put on a revival of Cocktail, where actors playing Brian Flanigan and Doug Coughlin toss each other bottles, make Alabama Slammers and sing the Hippy Hippy Shake in Austrian.

Anyway, the whole concept seems like Lucky Changs without the trannies, the perfect place for bachelorette parties and tourists looking for the "real New York". And with the half naked bartenders and livestock, it seems like a pretty safe bet that Trummer will be getting to know the Department of Health as well as he knows the FDNY. Theater Bar opens to the public in early September.
· Where Bartenders Will Be Part of the Act [WSJ]
· Apotheke's Albert Trummer Plans Cocktail Lounge In Tribeca [~ENY~]