Share All sharing options for: Five Other Ideas for 'Chipotle Style' Fast-Casual Concepts

Over the past few months, New York has seen a number of high-profile projects that describe themselves as “Like Chipotle, but with...” First there was the opening of K! Pizzacone, the weirdo stuffed-to-order hand held pizza pie shop, then news broke of the imminent opening of 4Food, the bonkers techie restaurant with donut hole burgers that could be filled with customizable "scoops," and finally, this week saw the opening of Hello Pasta, the first location of a chain where customers pair noodles with sauces and toppings, in the style of ordering a burrito. If the lines are any indication, these concepts might have some legs. With that in mind, here are a few ideas of how other New York eateries can get in on the Chipotle-style action. 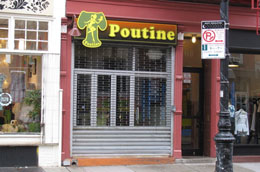 “Like Chipotle, but with Canadian French Fries”: The problem with the now shuttered T-Poutine, New York’s only fast-casual Canadian junk food shop, was not the food on offer (who doesn’t love loaded cheese fries?) but rather the lack of options and customization layers. A new model for the shop that allowed customers to pick the type of fry (classic, sweet potato, or “air baked”), the type of cheese (mozzarella, cheddar, Poblano Jack) and types of gravy (pork, beef, veggie), and any other type of protein-based add ons (carne asada, refried beans, grilled talapia) would be much more in line with the particular tastes of the new generation of diners. 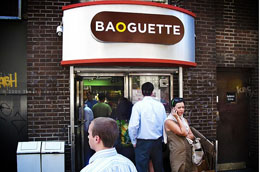 “Like Chipotle, but with Vietnamese Food”: The banh mi craze has cooled considerably since those heady days of mid-2009 when Michael BAO Huynh was opening up sandwich shops left and right. What better way to keep the trend going than by reinventing his concept with a bit of a Chipotle twist? Instead of picking from a predetermined menu of sandwiches, rice and noodle bowls, customers could go down a line and chose the protein, sauce, Vietnamese-style veggies and pickles to be stuffed either in a variety of baguettes (plain, whole wheat, spicy Jalepeno and cheddar), or put in a bowl over rice or vermicelli, or, for the a carb-conscious diner, wrapped in bibb lettuce leaves. Who knows? Maybe this could be the right business model to make Michael Huynh’s dream of total block-by-block New York domination come true. [photo credit] 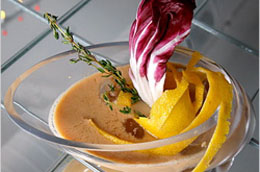 "Like Chipotle, but with Cocktails": As we know, market produce and bizarre savory liquors are gaining popularity in the world of mixology these days, so how about a bar where customers can pick what goes in their drink from a list of booze, garnishes, fruit and vegetable juices, ice cubes, and artisanal chasers? Bizarre Italian newcomer Il Matto already has the skills where mixing in weird ingredients is concerned and this “choose-your-own-adventure-option” might prove more popular than their current drinks menu, which includes concoctions made with cheese, lettuce and rocks. [photo credit] 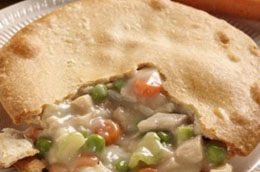 "Like Chipotle, but with Pot Pies" By most accounts, the lobster pot pie at The Lion is one of the main things worth eating there, and the dish is, at its core, a universally beloved comfort food with unlimited, optimizable potential. A “tell us how to stuff it, and we’ll bake” concept in the model of K! Pizzacone, could work well, with of course any variety of premium proteins, seasonal veggies, and sauces. One of the owners of The Lion already successfully created a single item concept, MacBar, so the startup of John DeLucie Presents: The Lion Pot Pies To Go should be no problem. [photo credit] 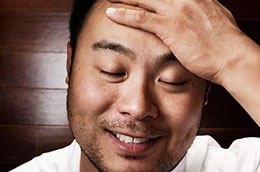 “Like Chipotle, but with David Chang”: It’s easy to forget that before it was a Michelin ranked, NYT three star restaurant, the Ssam Bar was David Chang’s ill fated attempt at Korean style burritos, in the model of Chiptole. New York 2010 is now the perfect time and place to revive this concept as greater percentage of New Yorkers now have a taste for, and love of Chang’s food, and also the chef has gotten considerably better at branding and expansion. Ssam shops where customers could pick buns, wraps, braised meats, pickles, sauces, and kimchis to order, would no doubt be a hit in Midtown, The FiDi, the UWS – basically anywhere. Add a soft serve machine to the operation, and the shop might have enough legs for Brooklyn and Miami expansion within a year or two. [photo credit]