Chef Shaun Hergatt on Fine Dining, the Recession and SHO

Share All sharing options for: Chef Shaun Hergatt on Fine Dining, the Recession and SHO 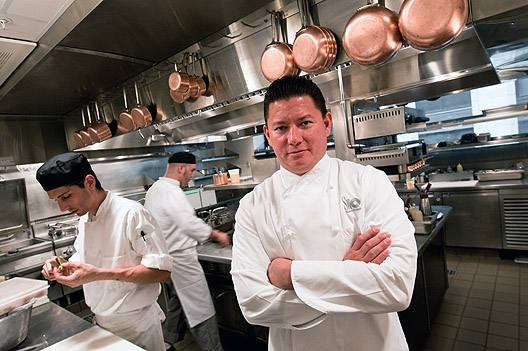 SHO Shaun Hergatt opened last June, at of one of the lowest point of the recession. No one was more aware of the challenges of introducing a new fine dining concept during this rocky period than its chef and owner, Shaun Hergatt. Throughout the restaurant's first year, Shaun kept his head down and worked, not just on the food coming out of the kitchen, but on providing something he calls “residential service." He believed that this way of developing relationships with customers, and making them feel at home would not only bring people to his elegant restaurant in the Financial District, but also help establish SHO as one of the great fine dining experiences in the city.

Shaun Hergatt, Chef and Owner: About a year and a half before we opened, I worked with the construction team and the interior designers, putting the whole concept design together. Really, it was just a combination my cooking for the last 20 years, and what I’ve done, and just a lot different ideas of what I think a restaurant should run like. Asian-accented modern French cuisine was the concept, so right from the inception — not only the visual aspect, but also the way the operation works, the table sizes, to the chairs, to the color of the artwork — it was really linked to a strong idea of what the cuisine was. So, even when the construction team was working, I was here every day, making sure that every single detail was put into its perfect place.

After working in other people's kitchens for twenty years, did you see this as an opportunity to build your dream restaurant? Yeah, absolutely. It’s definitely a dream restaurant. One of the ideas I wanted to do was have a visual line to the kitchen. I wanted to put up a big window so that people could see the animation, and understand how clean we are, and also communicate a very direct idea about how we need to operate as a restaurant. When I was taught as a chef, I was taught that when people are eating, it’s like surgery, everything has to be that clean, with the front of the house making sure that every glass is polished, making sure that every piece of cutlery is perfect. And that’s the sequence of how we do business here. I will say that I wanted to introduce what we call “residential service.” I want you to feel like you’re actually comfortable, and I want you to feel like you’re in my house.

SHO opened during that time when a lot of very nice restaurants were putting things like hot dogs and fried chicken on their menus. Yeah, it was a recession. Were you nervous about that? Yeah, I was terribly nervous. We were heavily criticized for opening an opulent restaurant right in the middle of a recession, but when it takes you two years to be able to create something like this, and to put it into format, you don’t necessarily have the luxury of walking in and changing everything. So, I changed the pricing. I looked at the wine list to make sure that it was more affordable. I believed in the fact that if we drive quality, and if we have this residential style service, that people are going to naturally come. So, for the first three months, I was sweating, because we had very few clients. But at the same time, we stuck to our guns. Initially there was going to be a hotel, and the hotel never came to fruition. So, that was going to be a lot of seats for me, and I was going to rely on people coming in. So we had to change our strategy, we are a free-standing restaurant, and we survive off the covers that come in, and we don’t have a hotel to rely on.

So how did the opening go? It went very smooth, actually. I’ve done eight hotel openings, and this is my fourth restaurant opening. I found that this one was very organized, the staff was very enthusiastic, we did a lot of training, and now, once you get through the opening, what it becomes about is stabilization and making sure that the consistency is there. For me it’s very important to make sure that the clients that we have held, going forward into the future, that they have that complete consistency and that trust with us.

Did people in the neighborhood check it out? Absolutely not. We have more destination diners coming to SHO restaurant than we have local community, and that was a very strange thing to us. The local luncheon – we had the downtowners come and eat here. Once we capture the local diners, they loved it. They come back. But to get them here, it was quite difficult because obviously, it’s not a casual restaurant like they might generally frequent, so we had to try and break their habits, and still at times, what we offer is not what they like to eat. It took us about six months to get there, but after that six month period a lot people started to flow in.

Would you say that’s a result of an uptick in the economy? I think that if you can open up in the deep darkness, bottom pit of a recession like that, everything else is going to look golden. Because when we opened, and we had like 35 people in the dining room -- and this is a big restaurant –- that can be a plague and that can be a curse for a new restaurant, because people want to be around a crowd. Once again, it comes down to the staff. We talked to a lot of our clients, and we built it.

Early word was very good, but there was a NYT Dining Brief that seemed a little bit less than fair in terms of gauging the ambition of the restaurant. You know, I learned a very important lesson when I worked for Gabriel Kreuther. We opened up and we got kicked out from the Times, and William Grimes came back and gave it a three. I’ve had a huge amount of success, which I’m extremely grateful for the reviews I’ve got from Michelin, Esquire, New York Magazine, and I understand that I’m the new guy on the block, and that I have to prove myself. We’ve had such a great deal of success, I’m extremely grateful terms of what people have written about us, and once again we stand by the quality of what we serve. With the NYT brief, it was a strange time, because it was a transition between writers. Also, I knew that Sam Sifton had come on board, and again, it seemed like in his opinion, he had a very fussy experience, and once again it’s his opinion. I don’t really get upset about what they wrote, because there were a lot of positive things as well. I think that you have to wear what you are given, and you have to only take it as a challenge, and reproduce and make better what you do, and I’m a firm believer that if you do quality, that you’ll get recognition eventually.

Were you aware that you were being reviewed? What was that experience like? I think that everyone knows that if you have a reviewer coming in, they’re looking at all tables, they’re looking at the service, they’re looking at how the wine is being poured, they’re listening to the other people at the tables. So, being a great restaurant is not just about sandbagging and hitting certain VIPs, it’s also understanding that if a guy sits down and has one course in your restaurant and the other ones are having tasting menus, how is the coordination of the wine service, and food, and are they having an excellent, superior experience?

That’s interesting, because Sam Sifton, more than the other NYT critics who preceded him, seems to have an eye out for the other diners in the room. And the funny thing is that anytime that we had recognized any of the food writers coming in, we were also very focused on the rest of the tables making sure that you know... we knew that Adam Platt is looking at the other tables to make sure that the food is coming out the same. With the Michelin Guide, we didn’t know that they were here, so we had to be good on every table. So, if you had this attitude that you were just going to sit there and look after the food writers, then you’re in some serious trouble. We have a philosophy that every table, and every client counts.

When you were celebrating the one year anniversary a month ago, did it feel like a year? For me, it was major victory, but it didn’t have the essence of what we expected. It was really quite a strange time, because we’re busy. And a lot of the time we didn’t actually have five minutes to draw back, and say, “look, we just created something that’s fantastic, and we’re a year old.” We were busy and just focusing on making sure that the service and the food was great, and it wasn't until about a week and a half later that we realized that we were a year old. It’s our anniversary. Everything slowed down for a couple of days, and we got a grasp of it. But then things got busy, and we had to re-focus on making sure that our clients are happy.

So what’s next? The next year. Hopefully people come back and write about what we’re doing. Before we met this afternoon, I was discussing the fall menu with the rest of the team, running through some ideas, and what ingredients and what we’re going to use. Trying to introduce some very different styles of food that people may not have frequently eaten in this city, and just composing something that’s going to be very interesting for the fall and for the winter.

How many days a week are you here? Every day. Lunch and dinner. If I’m traveling for food promotions I’m not here, or if I have a birthday or whatever. But I would say that 99 percent of the time I’m here talking to my clients, I’m in the room, I’m in my kitchen making sure that everything’s working right. But now what it’s become, as a chef and owner, what you find is that it’s not just about the kitchen, it’s about the control of the service. It’s about the lighting, it’s about the air conditioning, it’s about making sure that the tea pot is perfect before you put the tea in. It’s about the music. There are so many different aspects of the restaurant business that, yes, food is what I do, but at the same time, I’ve become more of a restaurateur, That’s the challenging part, that’s also the fun part for me. I lead a team of 85 people, and so, I have to be here to show that much more attention, because it’s only a year.