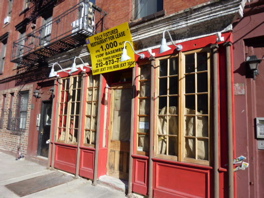 Sometimes there is no better way to beat the summer heat than joining our friends at Community Board 3’s liquor license committee. While last night's meeting was short on big, high profile projects, there was no lack of heated community ranting. The fight over a transfer request for Sin Sin/Leopard Lounge was the night's centerpiece, but there were also a big decision for the V Bar team’s new project in the historic Amato Opera space. Here's how it went down:

1) As expected, last night’s requisite public outcry was focused on a license transfer for Sin Sin/Leopard Lounge. The new owners said they would maintain the establishment’s current name and hours, but would beef up security detail and try to attract a more “upscale” clientele. Neighbors came out in full swing, however, with 20 showing up to oppose the transfer, claiming that Sin Sin was the source of countless brawls and noise issues in the neighborhood.

Things got personal, as CB3 chair Dominic Pisciotta questioned whether the transfer applicants’ background in managing a Dunkin’ Donuts made them unqualified to take on a bar with such a troubled history. In the end, the board settled on the sound logic that it makes sense to deny new owners because the current owners are doing a poor job and voted to deny the transfer request.

2) After a battle over some minor details, the board eventually threw its support behind a new restaurant in the former Seymour Burton/Butcher Bay space. Tentatively titled Ghost Town, the restaurant fought hard to keep its front windows open until 10 PM. However, committee chair Alexandra Militano summarized their argument as “We want [them open until] 10 because we want to see if we don’t fuck up.” Following enough outcry from neighbors, a compromise of 9 PM. was reached, and the restaurant was granted its restaurant-wine license. Update: Grub Street hears it's called Goat's Town, not Ghost Town (probably a better name?), and that Nick Mogenstern from the General Greene is in charge.

3) Italian joint Ballaro, located as 77 Second Avenue was granted an extension of its beer and wine license to its outdoor sidewalk café, but not after first receiving a scolding from the community board. After a neighbor presented photos that the restaurant had already been serving alcohol outside without the permit, the board debated whether or not to grant the license and therefore “legalize bad behavior,” but eventually relented.

4) Neighborhood favorite Mama’s Bar was given approval to expand into it’s basement space.

5) The 13th Step, the mildly-offensively named tavern in the former Telephone space was quickly approved for a renewal of its outdoor café license.

6) International Bar was swiftly and unanimously approved for the Lily Coogan's space at 102 Fist Ave. The new owners said the venue would have live music.

7) Finally, the night would not be without at least one more pointless refusal: an unnamed Japanese ramen and sushi restaurant looking to move into the Chickie Pig's space on 121 Ludlow Street between Rivington and Delancey streets, a block with no fewer than seven vacant storefronts. The reason? It still falls within 500 feet of three other licenses, or a “resolution area” in community board jargon.
—Thomas Garry
· All Community Board Coverage [~ENY~]