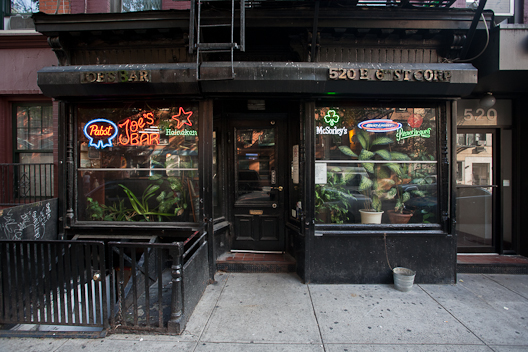 Can there be an ancient watering hole in lower Manhattan—like McSorley's and the White Horse Tavern—that hasn't been fetishized and celebrated within an inch of its life? One that have been largely overlooked by the press and the tour guides all these years? Apparently. Two steps beyond the facade of Joe's on East 6th Street, off Avenue A, with its streetside collection of suffering house plants, and your first thought is, "This place is old." The dark red ceiling is a patchwork of tin. The checkered linoleum floor (no doubt hiding a hardwood one) has been darkened by foot traffic. There's a payphone on the wall. The restrooms have little illuminated boxes above them saying "Men" and "Ladies"; a sink to wash our hands is in a separate alcove nearby. Opposite is the heavy wooden door to what was once a walk-in ice box.

Yet, Joe's is not a living museum. It's a bar. A very basic, very dark bar, and probably one of the quietest in the area. Some call it a dive bar, but it's too clean for that. Others say it's an old man bar, but the regulars I saw were all fairly young. If it has a focus, it's not history, it's pool. There a scuffed-up table in the back and everyone in the place seems to use it at one point or another. They play pool like they're guys playing pool—not hipsters self-consciously going through the motions of playing pool. (This sort of unexamined activity is a rare thing in the East Village.) Very specific and unironic rules are posted on the wall and a couple old glass cabinets hold various trophies.

Joe's is owned by an actual Joe. His wife's name is Dottie. They keep the beers cheap, the idiots out, and the juke box full of honky-tonk and classic country. They've had it for 41 years, according to the barmaid, a tall and friendly sort who dresses all in black, and is more than willing to toss one of her barflies a butt when they need one. Before that, who knows? But there's no doubt in my mind that this address has been a bar for a least a century. The bartendress pointed out the ornate, textured wallpaper—fanciful raised swirls of dark brown upon a lighter brown background—that can be seen between the several mounted deer heads on the wall. "It used to be white," she said. "See that circle that's a little lighter. There was a clock there." There's a different clock nearby now, a huge, square, plastic, Lowenbrau timepiece.

The walls grew darker through years of indoor smoking. That ended in 2003 with Bloomberg's ban. Yet, there are still signs posted here and there in Joe's warning patrons of the coming prohibition, as if the change happened yesterday. Joe and Dottie still smoke in their tavern when no one's around, I'm told. It's their bar, after all.
—Robert Simonson