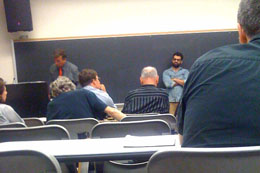 A part from the news that Gabe Stulman would be taking over Fedora, last night's Community Board 2 meeting saw some other high profile projects face the powers that be. It was a five hour scorcher, filled with several dramatic flourishes, and many, many keyed up, sleep deprived neighbors airing their grievances about the bars and restaurants of downtown Manhattan:

1) Bobo’s Carlos Suarez is planning on opening up a 65 seat, morning, noon and night “Brasserie/Bistro” in the old Village Paper store on Greenwich and West 10th St. with a sidewalk cafe, and is seeking a full liquor license. A few curious details on the space: Suarez picked the location because it is one of the only single story buildings in downtown Manhattan suitable for a rooftop garden, which he plans to build to grow produce for the restaurant. What’s more, the garden, and the restaurant facilities will be incorporated into a school lunch and food education program that he is creating in conjunction with nearby PS 41. Despite these good, and sincere intentions, neighbors complained of the glut of full licenses in the area, and the board was sympathetic. Suarez may resubmit for something other than a full license, or work on the full license after some more community outreach.

2) Two Florida nightlife guys, John Keogh and Tim Ryan want to turn the old Senor Swanky’s on space on LaGuardia and Bleecker into a 56 seat Gastropub with a “covent garden” out front, that serves English, Welsh, Irish and Scottish food, with of course, booze on offer. The team was unprepared, and the board suggested they talk to the community a bit more before resubmitting a proposal.

3) A few team members behind the Merc Bar want to turn the old Kos space at 264 Bowery into a “Seasonal American Tapas Bar”, with a full liquor license and service till 3:30 AM on the weekends. Even though the group said that the restaurant would feature an unnamed “high profile chef” who is currently working at “one of the best restaurants in the world," the board naturally thought that their plan was less for a restaurant that for a bar, proper, to flood the Bowery with more booze swilling, cell phone chatting, smoke spewing revelers till all hours of the night. The groups plans were denied, there’s a chance they might seek a beer and wine license, or shorten their hours to get the full deal.

4) The full liquor license proposal for Segafredo, the first New York branch of an Italian franchise of table service cafes serving coffee and “light fare” in a space on 348 Bowery, met huge opposition from the board and the neighbors in and around Great Jones St., and was ultimately denied. Even though they said that they wanted the license mostly to serve things like “negronis, sambuca, and aperitifs” a member of the nabe presented the board with a petition signed by over 100 residents of that stated that they do not want any new liquor licenses in the area. Odds are the team will come back with beer and wine application, as a bar element seems crucial to the concept, which also involves a giant backyard, and sound-proofed retractable roof.

5) Although the board and the community was thrilled that Gabe Stulman would be taking over the lease at Fedora, his desires to keep the restaurant open till 4 AM was met with some opposition. Stulman has demonstrated a mastery of keeping the noise down at his previous three neighborhood restaurants (all of them open till 2 AM), but the board decided that it might be best to close up shop at Fedora around 2 AM, with the possibility of 3 AM Thursday-Saturday upon opening. If the powers that be do decide that Fedora must close at 2 AM, we can most likely expect a reapplication for extended hours after a few months of smooth operation.

6) The committee granted AB Green Cansevoort LLC, AKA the Top of the Standard, FKA the Boom Boom Room, a new license for a private club, that they hinted would be a "members only" affair. This approval came after some argument as to how many "guests" would be allowed in a part from the crowd carrying few.

7) The Karaoke BoHo on East 13th St. reapplied for a full liquor license, after having operated without one for several months. Neighbors, and the board did not respond kindly to their proposal, ultimately rejecting the application.

8) A new burger joint is going into 615 Hudson street, with a menu to be consulted on by a wd~50 team member and Chef Shane Kelly. The board, in conjunction with the neighbors, did not approve of a full license, but suggested perhaps a reapplication after six months to see how the owners handle the crowds and the noise.

9) Elsewhere, the Village Tratorria was denied a full liquor license upgrade on the basis of over saturation, and nearby mussels joint Vol De Nuit was approved for outdoor seating, so long as they packed it in around midnight.