Share All sharing options for: Tracking the Downtown-to-Midtown Restaurant Migration

For years, the big restaurant openings in Midtown fell firmly in two camps: chains and good, if pricey power lunch spots. Over the past year, however, the neighborhood has seen an influx of big players from the downtown dining scene, opening up the kinds of restaurants that offer the same thrills as their previous eateries, often times with a more ambitious scope, and a menu catered to the savvy expense account crowd. Here are five of the big restaurants leading the Downtown to Midtown migration: 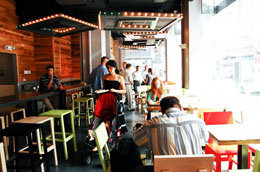 The Shake Shack Midtown: Yesterday’s Shake Shack opening was exciting not only because it brought Shack Burgers, concretes, and cheese fries to the area but also because Danny Meyer and Co. designed a fresh, new space with its own character a part from the other locations. By opening up a Shack with an original design and exclusive menu items, the restaurant group has not just joined the Midtown dining fray, but taken a part in the neighborhood's dining evolution. 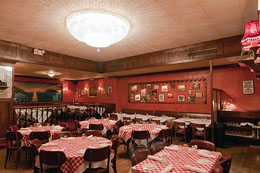 East Side Social Club: When they opened the East Side Social Club last fall, the Gilroy family had already created two restaurants that were and still are emblematic of their own downtown scenes: Macao Trading Co. in Tribeca and Employees Only in the West Village. And with its plush design and old school style cocktails and menu, the Gilroys brought a huge downtown dining trend to Midtown: the eatery that recalls New York’s past, if not one particular era. Like the Minetta Tavern, or the Lion, the East Side Social Club is a clubby but charming space, that owes more to Lower Manhattan’s dining and nightlife sensibilities than Graydon Carter’s nearby Monkey Bar, which it is often compared to. 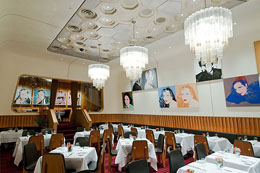 Casa Lever: The St. Ambroeus team, who own restaurants both on the Upper East Side and the West Village, created a dining room that borrows from the best of both areas in terms of design: you get a big space with history, along with chic, eye grabbing details that recall the downtown art world, and a few cozy nooks and corners. By all accounts the food is solid, and if it’s a power lunch spot, its one designed to make people who rode the train from either end of Manhattan feel comfortable. 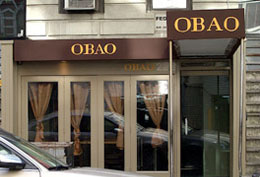 OBao: That Michael Hunyh opened up locations of his Baoguette in the FiDi and on St. Marks last year is no surprise, but what’s interesting is that in the midst of planting his sandwich shops all around the city, Hunyh also opened up one of the more ambitious restaurants in his empire, OBao, in Midtown East. Even if it was pitched as the first of a potential chain, OBao’s menu saw Hunyh branching out into Pan-Asian cooking that also incorporated elements of BBQ. OBao is a more of a win with the take-out bunch at lunch, but from day one Hunyh has also tried to appeal to the dinner crowd, with a fifty seat dining room in the back, full bar and an expanded menu at night. 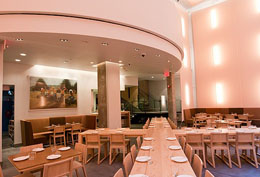 Ma Peche: When David Chang’s restaurant soft opened in the lobby of the Chambers Hotel back in December, the initial offerings – a fine, but standard $18 cheeseburger, banh mi, noodle bowls – did not suggest that the new project would be as distinctive as his others. Now that the full space is open, Chang’s decision to plant the Momofuku flag in Midtown make a bit more sense. The project is an opportunity for his chefs to flex their muscles, and refine a strand of cooking that has always been a part of the restaurant group’s work – French Vietnamese – while offering a true piece of event dining: the fantastic, sprawling beef 7 ways. As Bloomberg’s Ryan Sutton suggested in his rave today, the $85, six person or more meal is not only a perfect fit for the expense account crowd, but really couldn’t exist without them.