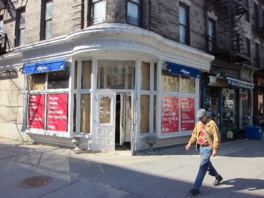 Last night's Community Board SLA Licensing meeting was dominated by a few distinguished heavy hitters. The six hour meeting was just part one of this month's docket—part two is tonight!—so sit back and relax:

1) One Stephen "A Whole Lotta" Hanson made a personal appearance - greeting a young Zachary Chodorow and a mature Ed Schoenfeld - to appeal for a cabaret license for 675 1/2 Hudson St., a restaurant going in the old Vault space between Dos Caminos and Spice Market in MePa. He smiled, shuffled his feet a little and promised it wouldn't be a nightclub, and voila: permission granted.

2) A confident Bobby Werhane (Johnny Utah's, Choptank) made the case for his Italian restaurant taking over the old Alfama space at 551 Hudson St. He laid out his business model of having his establishments close one hour after the end time stipulated in the liquor lease. As such, he was given the go-ahead for the operating hours of 8 AM - 3 AM, with last call being 2 AM nightly.

4) The Standard Hotel very vaguely revealed their plans to turn the Boom Boom Room space on the 18th floor into a private club in the vein of Soho House and The Norwood. Board members were skeptical about the project, which requires a little legal workaround whereby the 18th floor would have its own liquor license separate from the hotel. However, in order to do this they're applying as a 501(c)(3) nonprofit organization, which one board member pointed out must have a mission statement, and as such it was deemed that reps from the hotel had failed to explain in detail their plans for the space (what, "a playground for the rich and beautiful" isn't enough?): DENIED.

5) Next up, the Red Farm team, headed by Son of Chod Zachary Chodorow and Asian cuisine expert Ed Schoenfeld, whose Asian concept in conjunction with Chinatown Brasserie chef Joe Ng at 529 Hudson St. was ultimately approved for a 2 AM license after trying for 4 AM. Chodorow and his team agreed to stop serving booze at 2, while the kitchen will stay open 'til 4. All in all, the place will have about 40 seats, and they're aiming for the "chefs after work" demographic.

5) I Tre Merli was a hotly contested renewal application, with owner Paolo Secondo on the receiving end of some serious noise allegations. Secondo vehemently denied that his place is a night club, despite admitting to hiring club promoters to get people in the door. And, in what may have been the sweetest moment of the night, a board member used the power of the internet, pulling up a Youtube video titled "Blondes and Vodka at I Tre Merli" showing Secondo pouring a vodka pyramid flanked by two fair-haired dames while music blasts in the background. The result? A big fat denial, plus they'll be sending the SLA to investigate.

6) Karaoke Boho, the karaoke bar without a liquor license, had their application laid over after an attorney described the fraudulent liquor license that had been acquired by another lawyer and was subsequently nullified. Several NIMBYs spoke out against the establishment, citing litter and noise complaints.

7) Lastly, a lawyer for Louis Miguel and Aldo Alo - owners of De Santos - made the case for a license renewal. In fumbling through their explanation, the owners accidentally admitted that they've been operating outside the stipulations of their license (whose cut-off time is midnight). And, in yet another blow, it seems that they've been illegally running two venues under one license (De Santos and the downstairs lounge Janis) and as such their renewal was denied.
—Zachary Feldman
· All Community Board Coverage [~ENY~]