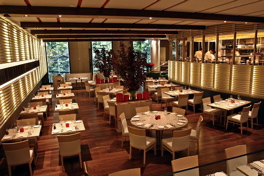 This is the golden age for carnivores in New York: a new nose-to-tail restaurant seems to open each week, a fresh round of BBQ prophets has emerged, bone marrow multiplies for the masses, and an entire neighborhood—Williamsburg—dutifully does its part to raise its mean cholesterol level with each new lease signed. Amidst all this caloric abandon, Rouge Tomate’s concept of “conscientious consumption” is not exactly en vogue, but by God do we need it.

This Belgian transplant landed in NYC in 2008 and sought to usher us into S.P.E. (Sanitas Per Escam, or Health Through Food), a collaboration between chefs and nutritionists to source locally and pair foods responsibly with a focus on healthfulness. Not surprisingly, the wine list takes an equally thoughtful approach, favoring producers who practice sustainable, organic, and biodynamic viticulture, though never excluding those who don’t. Rouge Tomate wine director, Pascaline LePeltier, has fashioned a well-balanced and varied list that certainly leans on the concepts mentioned, but never limits itself to them; her approach is one of pragmatism as opposed to dogmatism, and as a result we are left with a list that is about quality above all else.

The composition is varied, traversing both Old World and New without ever losing its way. In keeping with the locavore concept, domestic wines are certainly a strength here, highlighting many lesser-known producers in CA and beyond. There are also plenty of well chosen back vintage wines—particularly from Bordeaux—but don’t expect to see deep decks of dusty relics; the short list is focused on balance over show. The same principle applies to pricing, which is fair and split evenly (about half under $100 and half above).

So if you’re seeking a vacation from bone marrow and brisket—or if your doctor simply demands it—holistic cuisine and one of the city’s smartest concept-driven wine lists awaits.

Bang For Your Buck
Muscadet Sèvre et Maine ‘Expression de Gneiss’ 2007, Guy Bossard biodynamic $45
Very few people expect Muscadet to be age-worthy, but some of the best wines from the region (notably from Luneau-Papin and Bossard) tend to age very well. This is a fine example of the energy behind the Melon de Bourgogne grape when taken seriously. All of the charm and freshness of Muscadet, with a bit more stuffing. Decant.

VDT Gavi ‘Montemarino’ 2007, Cascina Degli Ulivi biodynamic $49
We admit that the wines vinified from the Cortese grape don’t regularly inspire, but this producer has us second-guessing our entire existence. This exceptionally terrior-driven wine is sourced from 120-year-old vines and is perhaps the most exciting wine currently coming out of the Gavi. Full-bodied, with fantastic texture and depth.

VdP Collines Rhodaniennes ‘Les Monestiers’ 2008, David Reynaud organic $48
The Collines Rhodaniennes is one of the great go-to value appellations in the Northern Rhone. Sourced from vineyards near St. Joseph, this is classic N. Rhone Syrah with all of the aromatics and structure that one would find at twice the price.

IGT Sicilia ‘SP68’ 2008, Ariana Occhipinti organic $55
Arianna Occhipinti is only in her mid-twenties, but she has already managed to achieve legendary status with wines that manage the warm southern sun with uncommon grace. This typical Vittoria blend of Nero d’Avola and Frappato is the product of extreme care in the vineyard and traditional/non-interventionist techniques in the cellar. A truly terroir-driven wine that is equal parts dirt and opulent fruit.

Crowd Pleaser
Valençay 2006, Claux Delorme $46
Valencay is an obscure hillside AOC in the Loire valley producing reds similar to those of Cheverny and made up of several grape varietals: usually Cab Franc, Gamay, and Malbec. Enough musk and earth for the geeks to stay interested, yet just enough fruit not to flip the uninitiated out.

Tocai Friuliano 2005, Russiz Superiore $44
Classic, fruit-forward rendition of this varietal from one of the finest producers in Friuli. With a few extra years in bottle, it’s slightly nutty, but still remains its brisk and tropical self.

Under $40
Gru?ner Veltliner 2009, Weingut H.u.M. Hofer organic $39
An unadulterated rendition of this classic Austrian varietal that hails from the Wienviertel, a large growing region just North of Vienna that’s proving to be one of Austria’s great regions in which to find value so long as you know thy producer. Brisk, aromatic GruVe.

Off The Beaten Path
Gamay ‘Bone-Joly’ 2007, Edmunds St. John $55
Yet another praiseworthy effort from Edmunds St. John, the kind of producer we wish CA had more of. In a sea of modernist pirates, Steve Edmunds is a lover of the Old World. His wines have serious character, restraint, and elegance, here displayed in an unlikely Gamay (grape indigenous to France’s Beaujolais) cameo in CA.

Cabernet Sauvignon 1991, Mayacamas Vineyards $210
One of the great Old School Napa producers, Mayacamas has the luxury of being able to time release its excellent library of wines. This wise, old Maya is a reminder of what Napa was and can still be when restraint is paramount. At 19 years out, this still packs plenty of juicy CA fruit, but with a whole lot more finesse and complexity.

Barolo ‘Cascina Francia’ 1999, Giacomo Conterno $254
The godfather of traditional Barolo and his top bottling, Monfortino, has long been the beacon for any producer seeking to create classic Barolo. This ‘Cascina Francia’ might be his “second” bottling, but it’s nothing short of exquisite. The ’99 was tough as nails on release, but it’s drinking like a dame at present.

WTF?
Pinot Noir ‘Canary Hill Vineyard’ 2008, Ken Wright $198
Ken Wright produces some of the best Pinot Noir out of Oregon, but this baby woke up on the wrong side of the bed. It’s a bit groggy at the moment and needs to climb back under the covers for the next three years before it’s worth $200—a price tag that’s a little high to begin with. Tell this one a bedtime story and lock the door.