Welcome to the Softer Side of Wine Palace CRU

Share All sharing options for: Welcome to the Softer Side of Wine Palace CRU

Welcome to Eater's column, Decanted, in which WineChap's Talia Baiocchi guides us through the treacherous world of New York wine lists. Today: Cru. 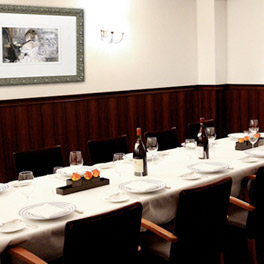 Cru’s wine program has birthed a long list of some of the city’s finest wine talent. Built by former wine director Robert Bohr (who has since moved on to focus on his importing/consulting business) and owner Roy Welland (an avid Burgundy collector), the list boasts over 150,000 bottles, some of which date back to 1900. It’s a wine list that doesn’t do jokes, housed in a restaurant that was once the NYC hideout for the world’s most famous collectors—a place where barons and big wigs would come to sip on some of the greatest wines from the previous century. Fast forward to a much-changed 2010: reeling from the economic downturn, Cru’s clientele has been cutting back on its Burgundian bacchanals, leaving the restaurant—which once topped the city in wine sales—contemplating its future. But that doesn’t mean that Cru is irrelevant in this new, tighter, somewhat sobered-up city.

In fact, Cru has always been a place (in terms of wine) that is just as suited to the wallet-conscious as it is to the well-moneyed. The first 8 - 12 pages of both the white and red lists are now home to a section called “Hundreds under $100,” a year-old feature that highlights an affordable composition of wines that has made Cru an industry hangout for years. These pages boast boatloads of excellent wines, all priced to move. Wine Director Greg Majors, a returning alum of Cru and formerly of Insieme, further chums the waters with a rotating monthly short list that highlights a specific region or varietal, cutting the margin on his picks by almost half and providing detailed educational info. This month: Riesling from Germany and Austria, with cameos from the likes of Fries (’88 Spätlese ‘Bernkasteler Schlossberg’ $75), Egon Müller (’05 Kabinett ‘Scarzhofberger’ $70), F.X. Pichler (’00 Smaragd ‘Kellerberg’ $125), Salomon (’79 Spätlese ‘Kremser Kogl’ $105), and so on. In short, it’s one of the best-kept secrets in one of the most obvious of hiding places.

So, while Cru may not be on the top of anyone’s hip list, and yes, the front barroom does recall an early ’90s airport VIP lounge, it’s still one of the best places to lay out a Benji (and if you’re still flush, a hundred of them) on wine. In tribute to this softer side of Cru, we’re skipping the heavy-duty stuff in favor of highlighting the wines from “Hundreds Under $100” that are well worth dusting off your best business casual attire, digging out a stale Dunhill, and paying that barroom a visit.

Bang For Your Buck
Riesling Smaragd ‘Hollerin’ 1995, Prager $95
Hailing from the Wachau—one of Austria’s premier white wine making regions along with the Kamptal and Kremstal—Prager makes some of the country’s finest examples of terroir-driven Riesling and Grüner Veltiner. This ‘Smaragd’ (a designation that is given to the top Wachau harvested at maximum ripeness and fermented until the wine contains less than 9 g/l of residual sugar) hails from the esteemed Hollerin vineyard site AND the epic ’95 vintage. Righteous combo.

Grüner Veltliner Smaragd ‘Von den Terrassen’ 1998, F.X. Pichler $95
Pichler is hands down one of the greatest Austrian wine producers. You’ll see the new releases of these wines dotting lists all over the city (generally at prices almost twice this), but it is incredibly rare to find the wines in back vintage. Killer find, from a solid vintage that should drink in its wheelhouse now.

Riesling Spätlese ‘Graacher Himmelreich’ 1995, J.J. Prüm $90
One of the biggest names in the Mosel, Joh. Jos or simply “J-J” makes a variety of wines from the estate’s distinguished holdings. The jewel of the J.J.crown is undoubtedly Wehlener Sonnenuhr, but Graacher Himmelreich is not far behind. Another great wine from the heralded 1995 vintage ripe for plunder.

Terralba Bianco 1999, Castello di Lispida $75
From the “orange wine” camp comes one more producer inspired by Friuli’s Josko Gravner to make white wines in a non-interventionist fashion, using amphora pots (ancient Roman style), and long macerations. Though the Terralba is not aged in amphora, the wine is still dark in color, slightly oxidized, and stands to challenge the very notion of what white wine can, or should be.

Riesling ‘Rosenberg de Wettolsheim’ 2001, Barmès Buecher $55
Small, still under-the-radar husband and wife team putting out powerful, principled wines farmed biodynamically. The 2001 vintage in Alsace was one of the greatest of the naughties and this wine is easily one of the best values on this list under $75.

Pommard Villages 2001, Comte Armand $95
For many, Comte Armand rates among the finest producers out of Pommard. Captained by one of Burgundy’s great winemakers, Benjamin Leroux (since ’99), these wines express the kind of finesse that is unmatched in this appellation known, above all else, for its power. Straight village level Pomm from the first year that the domaine was completely biodynamic, is an excellent opportunity to bump shoulders with Armand for under $100.

Monthélie 2002, Domaine Roulot $95
Monthélie lies just north of Meursault and west of Volnay and is known for great reds that require minimal coin. Roulot is one of our favorite producers from this area, and his wines, at their very best, are often said to have the power of Pommard coupled with finesse of Volnay. The ’02 vintage was excellent for both whites and reds and this should show leg with a spin in the decanter.

Bourgogne Rouge 2001, Domaine Denis Bachelet $65
In general, Bachelet is no bullshit when it comes to his Bourgogne Rouge (consistently one of the best year after year) and this is no exception -- all crunch, funk, and pure Burgundian Pinot Noir fruit.

Arbois Pupillin 2000, Houillon $45
Houillon is not quite as well known as, say, Tissot or Puffeney, but Emmanuel’s wines are beautiful, lively representations of their respective grape varietals. This 100% Poulsard is a light, slightly stinky, mineral-driven wine that has surely gained some wisdom with a few extra years in bottle.

Under $40
Riesling QbA 2002, Dr. Thanisch $35
One of the Mosel’s most reliable estates, Dr. Thanisch has deep roots (dating back more than 350 years) in the area. The QbA (or classified quality wine from a specific region) is an excellent cheapo intro to this old-timer, here from another fantastic German vintage.

Off The Beaten Path
Arbois ‘Cuvée Sacha’ 1999, Jacques Puffeney $55
Puffeney a.k.a. “The Pope of the Jura” has been making wine since he was just 17. He has since mastered the style of the region’s wines, and has earned himself Papal status among his peers. The ‘Cuvée Sacha’ is a blend of both Savagnin and Chardonnay, and is beautifully off-beat, slightly oxidized, and classically Jura.

Lemberger 2001, Kiona $40
Lemberger (also know as Blaufränkisch in Austria) made its way to Washington State via Canada in the 1940s. However, it wasn’t until 1980 that Kiona released the first Washington State Lemberger. Rarely found outside of the Northwest, this is not exactly the kind of wine you’d expect to find on Cru’s list.

Rieslaner Spätlese ‘Mussbacher Eselshaut’ 2000, Müller-Catoir $95
One of the most unique and fascinating wines from the Müller-Catoir estate. So much is going on in this hybrid of Riesling and Sylvaner that you might need to sit down, take out your diary, and scribble a love note or two.

WTF?
There are plenty of potential corpses strewn out about around $45 (see: ‘Les Vignes Retrouvées’ 2001, Producteurs Plaimont; Vogelsang 2001, Heidi Schrock; Fiano ‘Donnaluna’ 2001, de Conciliis), so consult your sommelier to avoid a misstep.