Long ago the owners of La Mar Cebicheria, a high-end seafood chain from Lima, Peru hinted that they were hoping to come to New York sometime after their 2008 San Francisco debut. And just last week, there were reports of a lease signed on an 8,000-square-foot space at 27th Street and Madison.

Perhaps that space fell through, because new signage reveals that the Peruvians will actually open on East 21st Street between Park and Broadway.

Coming from Peru's biggest celebrity chef, Gaston Acurio, the second American branch of La Mar will open in Spring 2011, and if it's in any way similar to its San Francisco sibling (it has the most expensive lease in that city), this will be quite the opening. Acurio is considered the Jean-Georges of Peru—expansionist yet very talented. His U.S. debut on the West Coast garnered quite a bit of buzz, and later, favorable reviews and profiles from Food & Wine and Portfolio.

Designed by the firm behind the looks of Aldea, Morimoto, and Corton, this large space should seat 110 people and will include a ceviche bar and a full liquor bar. On the menu: sustainable seafood, ceviche, Peruvian specialties like causas, tiraditos, empandas and even guinea pigs.

Here is the letter to the community: 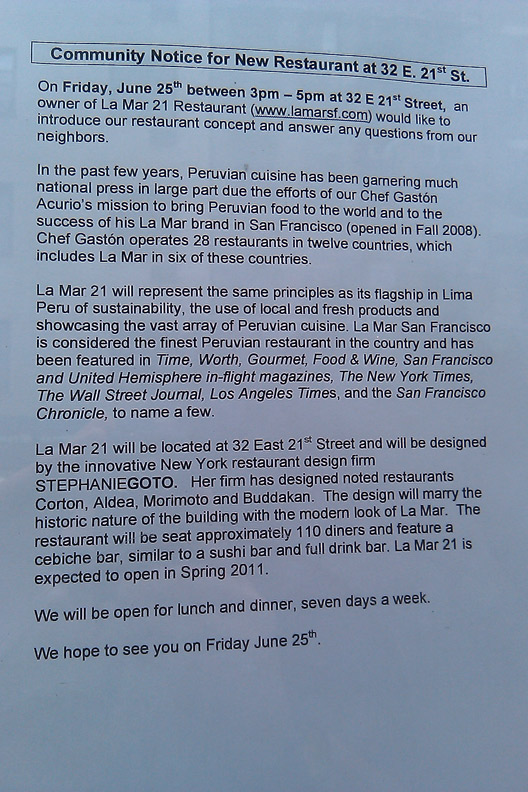