Quatorze Bis on the UES: a Monied Version of Chumley's

Share All sharing options for: Quatorze Bis on the UES: a Monied Version of Chumley's 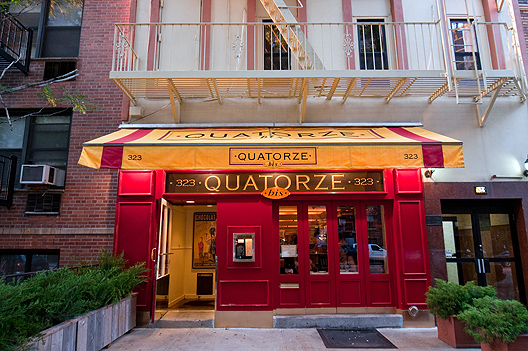 There are no interior shots to accompany this column about Quatorze Bis, the nearly two-decade old place that feeds Chicken Cordon Bleu and Pol Roger to the Park Avenue crowd. That's "because of high security for their clientele," which would be compromised by pictures that might reveal the floor plans. Seriously.

This is a first in the "Who Goes There?" annuls, folks. A top secret restaurant! Of course, anyone with $60 bucks that's not doing anything and a reservation can go in and case the joint if they wish. But keep your dough—I'll do it for you! You enter toward the front left of the bright red facade, into a small, rectangular room. The Maitre d', dressed Hamptons-casual, is in a nook to your left; the small bar, equipped with six stools, is to the right. The walls are covered with the requisite framed vintage posters of French apertifs and liqueurs. Three rows of tables march back to the kitchen, which is entered toward the right, just after the bathrooms.

Opposite the bathrooms are two bookshelves containing signed copies of volumes written by regulars: Joan Didion, John Gregory Dunne, Alex Witchell, A.E. Hotchner, Erica Jong. Hence the sensitivity of the management. Quartorze Bis is like Chumley's, but with money. But one "book" by one "author" really explains the need for security: "Bloomberg by Bloomberg." This is Mayor Mike's nabe—he lives just a few blocks away—and he eats here now and again. I half expected his caravan of idling black SUVs to rumble up while I dined on my Brook Trout.

Quotorze Bis is the kind of place we picture when we imagine how the Upper East Side eats. Soft, yellow lighting; white tablecloths; a small, exclusive room; subtle, unforced elegance; leisurely dining habits; a clubby atmosphere. The menu features fresher, more modern versions the kind of French standards you'd get over at Le Veau d'Or for less money. The few cocktails on the list include the Sidecar, the Negroni and the Kir Royale. It's that sort of restaurant. The Ladies Who Lunch lunch here, asking in cigarette-seasoned voices for "cold bubbles" (Champagne) and wearing bold prints they bought at Bergdorf Goodman and almost carry off. The men are perfectly fit, tanned and gray, like the father models in the Ralph Lauren catalogue. Everyone looks like they just stepped out of a bandbox. The regulars are greeted warmly by name by the front of house. If you're not a regular, you may be stared at with furtive, passive-aggressive suspicion. The place, we discover to no surprise, tends to empty out in summer because people retreat to the their summer places.

Quatorze Bis is so Upper East Side, it's funny to think it was started by partner Mark Di Giulo and Peter Meltzer on seedy 14th Street, back in 1984. The 79th Street branch was the second restaurant—it opened in 1990—and the only one that survives today. (The original closed in 1994.) Let it survive. It's not for me. But the well-heeled folks who quaintly call it their neighborhood eatery need and, I guess, deserve a place like this. Every New Yorker should eat according to their custom. Though me, personally, I'd hate to have to choose where I have dinner based on whether they had good security.
—Brooks of Sheffield