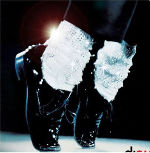 Do you want to hear an entire night of music written by just one strange, dead man? If you answered yes to that question, then why not head over to 1 OAK tonight, where they will be celebrating the first anniversary of Michael Jackson's death by playing only Michael Jackson music for the entire night. That's a minimum of five hours, which is about four and one half hours too much for us to take. The over/under for the number of times Billie Jean is played is set at seven. Place your bets in the comments. [EaterWire]