Everyone and their stylist friend turned out last night for the opening of Le Bain, the other 18th floor bar and roof bar at the Standard Hotel that is now being run by Andre from Paris. First, let's get to the facts. Le Bain was using a completely separate entrance from the Boom Boom Room, just a few steps west. Once past the crowd outside the door, guests queue in a hall waiting for a service elevator up to the 18th floor, which opens into a narrow dark hallway that leaves one a wee bit disoriented. A quick right turn and voila, Le Bain! They have added a few tables, black chairs and mini-banquettes to the mix, and of course there is still that famous pool, which last night featured not one but two topless women splashing to the crowd's delight. Unfortunately for them, the famous bathing suit vending machine had been relocated. There was free Champagne and vodka, the music was loud and the room smelled just a bit too much like G-Spa to stay too long. 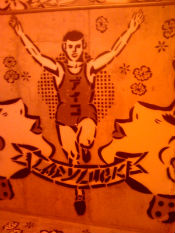 Access to the brand spanking new roof bar is through a Le Bain staircase, which is watched by a security guard who kept one of the two doors closed to improve traffic flow, something that is contrary to the laws of physics. The staircase has been covered in pseudo graffiti, and once upstairs, one discovers a lawn of lush, fake grass and lawn furniture scattered throughout. The hotel kindly left stacks of towels so guests who could not locate a chair could stretch out on the ground and enjoy those million dollar views. The rumored air stream trailer was nowhere to be found, but we did see ping-pong maven Susan Sarandon hobbling around on crutches. Even though the building is relatively isolated from residential buildings, there was hardly any music. It was a bit too crowded to enjoy the sticky summer air, but has the makings of a popular destination.

Because of the issues at the staircase, getting out of Le Bain was more trouble than getting in. We headed out the main entrance and saw Msr. Balazs escorting some of his suited friends inside. Meanwhile, the Boom Boom was hosting its usual well-heeled and eastern European crowd, a stark contrast to the scenesters that were getting down across the hall. The party was fun, the crowd was solid, but somehow we doubt that Le Bain (minus the roof) will have much staying power.
· Standard Rooftop Goes Andre x Andre with Le Bain [~ENY~]
· Le Bain Coverage [~ENY~]
· Boom Boom Room Coverage [~ENY~]