Welcome to Eater's column, Decanted, in which WineChap's Talia Baiocchi guides us through the treacherous world of New York wine lists. Today: Franny's. 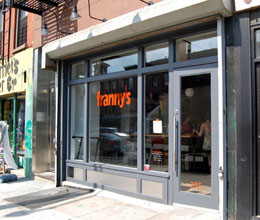 From the now legendary bivalve pizza to the rotating roster of pastas, house-cured meats, and veggie-centric starters, Franny’s has not only gained a 4-year allegiance from everyone within a 10-block radius, but it’s also inspired pilgrimages from as far away as Manhattan Island (even Tribeca!). But its magnetic ability to draw even the most Brooklyn-phobic is no mystery. As the figurative third child of husband and wife team Andrew Feinberg and Francine Stephens, Franny’s is truly a labor of love: a restaurant born out of Feinberg’s attentive knack for seasonal Italian food and Stephens’ love for Italy’s nether-regional wines. And furthermore, her tireless effort to match the wine list with Feinberg’s ever-changing menu calls for a oneness of vision that is often hard to come by.

But it’s her balanced preference for wines that embody a very classic sense of Italian rusticity (see: Montevertine, Burlotto, Ferrando) with those aforementioned nether-regions and the boundary-pushing winemakers who inhabit them (see: Zidarich, Ezio Voyat, Cantina Giardino) that make the wine program truly admirable. Only a few selections on the list break $100, and the mark-ups are some of the lowest you’ll find on wines in this range (generally the area of a wine list reserved for the highest margins).

The majority of the wines average around $45-50, with plenty of excellent options camping near $30. For those avoiding the bottle commitment, there are 15 wines available by the glass and three by the half that are good enough to build a meal around. Post-dining depression is cured with a well-muscled list of amari, digestivi, and seasonal housemade liqueurs—a Limoncello and an incredibly hardcore Vermouth are moonlighting at present.

Franny’s list may be short, but it’s long on charisma. It adamantly calls to our attention both Italy’s underworld and its old school; it asks us to try something new, but then insists we keep the change. It’s a wine list well worth the fording of that treacherous river.

Bang For Your Buck
Roero Arneis 2009, Bruno Giacosa $47
The mention of Giacosa gets wine geeks giddy. He’s one of the great winemakers (if not the greatest) in all of Italy and just about everything he touches turns to gold. This is yet another fine example of the man’s magic: pure, complex, and Giacosa good.

Bianco ‘Solea’ 2005, Roagna $52
One of Italy’s great Barolo and Barbaresco producers here showing his white side. This blend of 95% Chardonnay and 5% Nebbiolo (vinified sans skins) is a welterweight wine fermented and aged in wooden casks without losing its spunk. All minerals, intense Chard fruit, and bracing acidity.

Aglianico ‘Le Fole’ 2007, Cantina Giardino $38
As one of Joe Dressner’s newest portfolio additions, Giardino’s natural wines are finally finding a larger audience. This one is a former McNally Resto exclusive and is all unadulterated Aglianico without the standard tannic left hook.

I Pampini 2000, Fubbiano $50
This marriage of two unlikely varietals, Teroldego (on leave from Trentino) and Sangiovese, makes for a super funky, concentrated wine that hails from the hills above Lucca. Drinking open and warm at present—just begging to be spooned.

Valpolicella ‘Ca Fiui’ 2008, Corte Sant’Alda $44
This is vinified via the Ripasso method (the fresh juice is passed through the skins and must of the dried Amarone grapes), but it dares not sacrifice any freshness in exchange for concentration. From one of our favorite producers in the Veneto, this is forward, spicy, and charmingly rustic.

Off The Beaten Path
Vitovska 2005, Zidarich $78
Zidarich is a cult producer working out of Friuli’s Carso Valley—one of Italy’s most unique terroirs—and is guided by a non-interventionist creed. The grapes macerate on the lees for an extended period in open top neutral barrels, yielding a wine with great intensity and haunting purity. Truly one of the most exciting producers making wine in Italy at present.

Rosso Le Muraglie 2006, Ezio Voyat $68
Another bonafide legend in the world of obscure Italian wine. A blend of Dolcetto, Petit Rouge, and Gros Vien from the Valle d’Aosta. Extraordinary depth coupled with the buoyant elegance so characteristic of Vd’A wines. Drinks like Baryshnikov.

Ruchè di Castagnole ‘La Tradizione’ 2008, Montalbera $36
Considered one of Piedmont’s lesser varieties (along with Brachetto, Pelaverga, etc.) behind the big three (Nebbiolo, Barbera, and Dolcetto), Ruchè can be an excellent go to for value—if you can find it. Intensely perfumed and light as a feather.

Under $40
Kerner 2008, Abbazia di Novacella $38
The love child of Schiava and Riesling, Kerner is the unique language of this true old-timer (one of the dustiest wineries at c. 1142). Highly aromatic and full-bodied, with the acidity to back it up.

Alea Viva 2008, Occhipinti $36
One of the finest new additions to the scene as of late and one of the most obscure on the list. 100% Aleatico sourced from volcanic soil around Lake Bolsena, in often-taunted Lazio. Not the country’s strongest winemaking area, but one that is clearly got a thing or two up its sleeve. Smells of magma and black fruit.

Break The Bank
Arboreus 2006, Paolo Bea $102
Bea is one of the only producers to elevate this generally mundane varietal to greatness, and his new wine is dark in color due to long macerations and prolonged ageing in neutral barrels before bottling. An incredible effort from one of Italy’s great artisans and priced to be consumed.

Barolo Brunate-Le Coste 1999, Giuseppe Rinadi $185
Giuseppe Rinaldi’s wines are some of the oldest of the old school, and when they hit their zone, they’re near physically arresting. The ’99 is likely to be leaking plenty of Nebbiolo secrets, and with a spin in the decanter, it just may spill its guts.

WTF?
Colle Lucchesi ‘San Gennaro’ 1998, Fubbiano $46
This is likely a year or so away from tasting like East Village run off. Proceed with care and a high tolerance for farm funk.