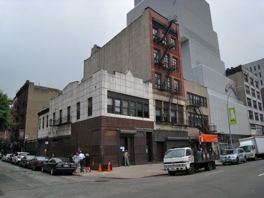 There are few things as pleasant as community board meetings. If any proceeding ever proved this, it was last night's six+ hour marathon at an assisted living facility on the Bowery. East Village bureaucratic doyenne Alexandra Militano and Co. took on a variety of proposals, handing down decisions in the usual capricious fashion.

1) The board first took on items for which there were members of the community present to speak. In this sense, Forbidden City was the main event. The nightclub in a mixed use building at 212 Avenue A has racked up a serious amount of complaints: according to neighbors, patrons constantly crowd the street, puking and peeing everywhere, and it's loud as hell. The community showed particular disdain for the establishment's DJ showcases, which take place twice a week. After an hour of debate in which the board acknowledged the fact that that the owners "seem sincere" and have been trying to make it in a tough economic climate, the establishment was denied its renewal.

2) Things got even murkier when Frank Prisinzano of Supper, Frankie's, and Lil' Frankies came before the committee to present for his new project, an Italian "nose to tail fast food" establishment at 24 Avenue A.

Prisinzano emphasized the fact that he's a "neighborhood guy" whose establishments have become "gathering places" for the community, and several folks came in to speak on his behalf, mentioning that they'd much rather something like this be allowed in the neighborhood than another bank or a Subway. In the end, serious criticisms of the crowding at Supper—despite the fact that Prisinzano demonstrated that he had recently taken serious measures to deal with the problem, including enacting a three strike rule for hostesses who don't address the crowding— coupled with the fact that this is such a problematic area, made it impossible for the board to push through a heavily-stipulated motion to approve. It was a draw, and the item will have to be decided before the full board later this month.

3) At these things there seems to always be at least one denial that makes you shake your head. Tonight, it was for Sea on A (171 A), a proposed seafood establishment that will do retail from 11 AM and turn into a restaurant at night. The board had approved the license at a previous meeting, but according to several folks present and one board member who spoke candidly, chair Alexandra Militano failed to support the decision at the full board, and the license did not go through. In the time since, the owner has gathered over 1000 signatures in support of the establishment and has extended the retail space in his floor plans. Despite this, and what one board member referred to as the clearly demonstrated public benefit of a retail seafood establishment in this area—something the community has "been asking for—the board voted to deny. The word "bar" was thrown around quite a bit, and those that were opposed were very well organized.

4) The team for Percy's at 210/212 Avenue A was approved for their new project, described by one of the corporate lawyers as "gastro fusion" and by the chef as "something along the lines of Northern Spy Food Co." And about that chef: he claims to work at a Michelin-starred restaurant but cannot reveal his name or where he works for fear that it could cost him his current gig.

5) Ewa Olsen of the restaurant Alta was in for SRO, her proposed tapas wine bar at 241 Bowery. Though it came towards the end of the night and ultimately was approved, it was hotly contested: the board wasn't exactly fond of Olsen naming a swank wine bar in an actual SRO building...SRO, and despite the fact that anyone familiar with Alta knows that it's not a rowdy spot, there was serious discussion about potential disturbances to the neighborhood. But like the board concluded in the end, it's a changing neighborhood and there's little they can do to stop that.

6) The team from Little Printz Cafe was approved for their "global jewish" restaurant at 40 Avenue B. The owners plan to serve breakfast, lunch, and dinner and create a menu that draws more from Mediterranean and European tradition than something like Katz's.

7) The Meatball Shop was quickly approved for their sidewalk café license.

8) Falai Pastry, TYDT, One and One, and Spina were approved, while TKettle was denied their beer/wine upgrade.
—Gabe Ulla
· All Community Board Coverage [~ENY~]