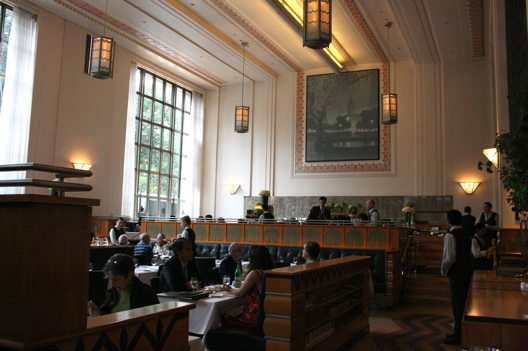 Among the city’s top lists it’s hard to find one that truly stands alone. Jean Georges, Daniel, Cru, Per Se—they all harbor impressive lists with incredible depth, yet each seems to be its own museum, erected to remind the more financially-favored of their own personal collections; these are the same museums that us plebeians are lucky to merely stroll through, and even then we usually just end up with a calendar at the gift shop. Eleven Madison Park, however, is aiming to be something more.

Among the wall-hogging masterpieces for the ages—the Lafons, the DRCs, the Guigals—hang palm-sized masterpieces for the everyman. The list is progressive in its aim to satisfy every palate and wallet simultaneously, despite the common feeling that restaurants of this caliber don’t need to attend to the latter. It has everything that makes a wine list great: vintage depth, variation (in price point, country, region, and style), fair mark-ups, cuisine symbiosis, and lastly, the fleeting “x-factor” if you will, i.e. a magnetic singularity that goes beyond the expected criterion to reveal inspiration and purpose. Surely this list’s “x-factor” is a result of being the tangible vision of a wine director’s love affair with a great chef’s cuisine.

Wine Director John Ragan and Chef Daniel Humm’s partnership began with one meal. Upon visiting the award-winning Campton Place, and after eating Humm’s food, Ragan (almost immediately) left his post as Sommelier at Napa Valley’s Martini House and moved to San Francisco to work alongside the chef. And in 2006, when Danny Meyer summoned, Ragan left Campton Place to follow Humm to Eleven Madison Park, where he took the wine list from a mere 300 selections covering California and France to a whopping 2,400 bottles, while managing to avoid going over-the-top. The list reminds us that Eleven Madison Park is a place to have the most extravagant meal of your life, but it’s also—thanks in large part to one of the finest wines-by-the-glass ensembles in the city—a place that isn’t totally out of reach. In short, this isn’t another homage to the unattainable. It’s an inspiring wine list, both in its progressive ability to be simultaneously highfalutin and curiously down-to-earth, as well as in its simplistic goal to be one with a great chef’s cuisine. It is, at present, the city’s finest wine list.

Bang For Your Buck
Viré-Clessé ‘Domaine Emilian Gillet’ 2003, Jean Thévenet $50
Thevent makes some of the most exciting wines out of the Macon, and his Emilian Gillet is consistently one of the best value whites in all of Burgundy. If there is any doubt of Thevenet’s prowess as conscientious winemaker, the ’03 will silence the trolls. Thevenet managed to produce a wine with serious finesse and balance from a hot vintage that yielded a whole slew of flabby wines. Macon Chard at its finest and priced to move.

Riesling Spätlese Pu?dericher Marienburg, Falkenlay 2004, Clemens Busch $75
Clemens Busch is sure to be a name that will become a greater part of our consciousness as more winemakers from the lower Mosel hit the scene. Natural yeasts and organic farming (both still a bit of a rarity here) yield concentrated wines that are about as big as the trocken (dry) style gets.

Palette Blanc 1995, Château Simone $85
It’s not everyday that you see back vintage white from this legendary estate in the mini-appellation of Pallette. This is one of those seemingly immortal white wines that shuns explanation—still vibrant, impossibly singular, and a serious steal at $85.

Faugères 2006, Domaine Leon Barral $60
This is one of those weekday wines that reminds you why you fell in love with wine in the first place, not to mention proof that wine doesn’t have to be expensive to be impressive. A blend of Grenache, Carignan, and Mourvedre from the Languedoc that defies the Southern sun to achieve low alcohol levels and serious finesse. Basket-pressed and raised in cement tanks; this is liquid terroir.

Roero 1996, Malvira $70
This is yet another unlikely friend from the often-overlooked appellation of Roero, just north of Barolo. Though the region is known for its production of white wines from the Arneis grape, the red wines made from Nebbiolo are often stunning, and this is one of the best values on the market from the legendary 1996 vintage.

Cote-Rotie ‘Côte Brune’ 1998, Domaine de Bonserine $95
Pure, restrained Cote-Rotie from this big player that, despite having been recently gobbled up by Guigal, still remains one of the better values out of the appellation. 1998 was a terrific vintage for the Northern Rhone, and this will drink with serious conviction.

Off The Beaten Path
Saignée de Sorbée (2.17.09), Vouette et Sorbée $195
Vouette et Sorbee: annihilating traditional notions of Champagne since 2001. The aromatic exuberance of this wine is simply too tough to explain, let alone within the context of Champagne standards. For those willing to pack an open mind, this is truly perspective-changing bubbly.

Spanna 1990, Dessilani $95
Producers from the still-obscure Novara Hills above Barolo (which houses both the communes of Ghemme and Gattinara) call Nebbiolo “Spanna” and label their wines as such. The wines tend to age incredibly well and sport a price tag that’s about half what you’d find just south--here from the legendary ’90 vintage.

Under $40
Tumbleweeds. But if you’re willing to spend the coin on dinner, up your budget to $60 and you’ll make out better than you would at any other restaurant of this caliber. If you insist on keeping the budget tight, there are few cool things to play with. See: See: odd ball Swiss ode to Humm(?) from Luc Massy--Dezaley , Chemin de Fer, Grand Cru, Epsesses 1999--at $40 and some under the radar ’98 Bdx from Clos Floridene, also at $40.

Crowd Pleaser
Gemischter Satz 2008, Wieninger $45
Rarely reputed as more than local swill, this centuries-old Austrian field blend (up to 20 varietals from the same vineyard) is in high renaissance; this is one of only a few of its type in the States.

Chianti Classico 2004, Castello di Cacchiano $55
Not just another Chianti copout. This is seriously some of the best Classico you can get for your coin. Classy, terroir-driven Sangiovese that’s fruit-forward enough to please the Philistines, yet dusty enough for the more contemplative among them.

Break The Bank
Cuvée Laetitia Brut NV, Billiot $195
Billi-ho, ho, ho. One of the great grower producers that always delivers a big fat bag of presents for those willing to leave carrots out for the Laetitia. In our humble opinion, it is simply one of the best NV Champagnes for the money. A world-class display of balance between opulence and finesse.

Meursault ‘Les Gruyaches’ 2002, Jean-Philippe Fichet $165
Fichet is making some of the purest single-vineyard Meursaults in Burgundy. His knowledge of the terroirs he works with is unmatched, and his wines display a purity and sense of place with which it’s completely useless to argue. The Gruyaches tends to be the biggest of his Lieux-dits plots (“named vineyards” or unclassified vineyards of note) and shall allow one to experience its glory with a short decant.

Nuits-Saint-Georges 1er Cru ‘Clos des Forets Saint-Georges’ 1995, Domaine l’Arlot $215
One of two l’Arlot premier cru monopoles (vineyard owned solely by the domaine), the Clos des Forets saint-Georges finds itself in the southernmost portion of the Cote-du-Nuits; as a result, it tends to be a bit more huggable and less I’ll-pull-a-knife-on-you than the wines from the northern portion. This is a great vintage that’s in a solid place at present.

Palette Rouge 1994, Château Simone $175
Again, it’s a rarity to find these wines lurking in back vintage. One of the great artisan French wines that in red form also seems to have the highlander thing happening. Great, attentive winemaking that has put this tiny corner of Provence on the map.

Barolo 1993, Bartolo Mascarello $255
It’s hard not to recommend a Bartolo wine at a Meyer restaurant; they all but have the rights to the back vintages from this iconic producer. Simply put, his Baroli are some of the greatest traditional wines out of Italy, ever. Often misunderstood because of their austerity and funk, these babies are candy for those who love tradition with a touch of rusticity and a ton of heart. The ’93, a somewhat troubled vintage (yet not for those of Mascarello’s caliber) for Piedmont, should be showing well at present.

Cabernet Sauvignon ‘Old Vine Reserve’ 1991, Mount Eden Vineyards $235
For all you lovers of Ridge Montebello, lest you not forget the other guy—Mount Eden. Located in the Santa Cruz Mountains AVA, Eden is one of the finest (and oldest est. 1948) boutique wine producers in California. Their wines show serious restraint and age-ability, and they’re honest translators of this unique and still under-appreciated terroir.

WTF?!
Syrah ‘Labels’ 2007, Sine Qua Non $425
Another brand new Syrah from Sine Qua Non that will only be worth the cash if you’re storing it up to run your car on it in the event of a natural disaster. These wines do have a significant following, and for those who prefer their Syrah from the southern hemisphere, this might be a revelation. For the rest, spend half the cash and buy yourself some Syrah that doesn’t double as fuel.