Share All sharing options for: George Mendes Takes Stock as Aldea Turns One 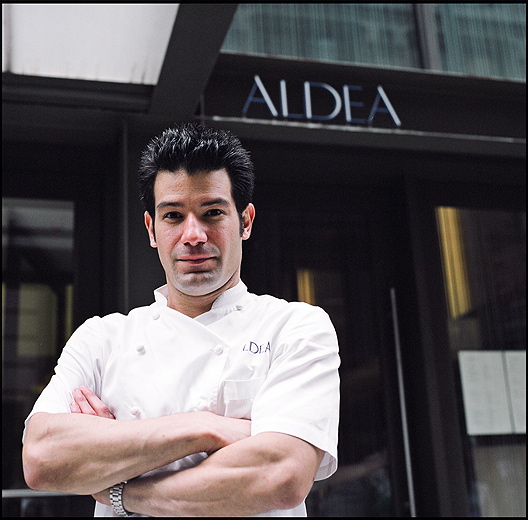 George Mendes spent fifteen years working as a chef in other people's restaurants before opening Aldea last May. The chef’s take on Portuguese food, spiked with a heavy dose of modern technique and bold, fresh flavors, drew raves from critics just a few months after opening and the crowds soon followed. If you can snag one of the seats at the lip of the open kitchen, you will see George quietly interacting with every dish that leaves his workshop: one minute he’s on sauté, the next he’s laying a piece of fish on the grill, whipping up a foam or reduction, then darting over to the pass to plate each dish. He is there for every service, lunch and dinner, six days a week. We sat down with George to talk about Aldea’s first year, and the road ahead.

George Mendes: I was blessed, I worked with a lot of people along the way that have been really, really successful. And I learned a lot from them over time, and years, and months. I wasn’t in a restaurant to say “Okay, I want to watch them closely and see how to open a restaurant.” I just absorbed everything as it came, and I only knew how to do certain things a certain way, and that was to always satisfy the customer.

Was the open kitchen always a part of the plan? Absolutely. I love the interaction with my customers. I like to see who is in the restaurant. I love the people that come and see me in the kitchen — friends, new customers — it’s a great feeling because I’m here to nurture people and feed people and make people happy. It’s nice to see people’s faces. I still run the kitchen like I would run any other kitchen, but there’s nothing to hide. There are moments of peacefulness, there’s moments of shit hitting the fan, and there are times when I lose my cool, but it’s not... it’s about me being a perfectionist and keeping my team motivated, you know? The open kitchen environment does affect our behavior in a way, but at the end of the day, people are eating and they kind of like the drama and the action of the kitchen.

Did you have a clear concept of the menu when you opened? For the most part, yeah. There were times where I would deviate too much. But at the end of the day, there was always that common theme — I like to describe the food as being “rustically refined.” I’m still remaining true to and respecting the traditional flavors, but also refining everything.

At what point did you notice a lot of people checking out the restaurant? I think when the major reviews started coming out — I was reviewed really quickly. New York Magazine was the very first one, and I was fine with it. I was like, “You know what? I’m open. So, if they’re going to play, let’s play ball." I had no control over that. Whether I think it’s unfair or fair, it doesn’t really matter.

What was that like, opening and knowing that you were being reviewed so quickly? It was a rush of adrenaline. You know, it was a roller coaster ride. There were a lot of sleepless nights. There was a lot of pushing the staff, pushing myself, and running the restaurant. I wasn’t just a cook anymore, I was making sure that the front of the house was up to speed, and kept them motivated. I knew, and Heather my General Manager, we both knew when we opened that we were going to get hit hard by the critics. They weren’t going to say “Okay, Aldea. Let’s let them breathe for two or three months.” It wasn’t about that. I welcomed it, I asked for it and I got it. It was a balance of scared shitless and psyched every time a critic walked in the house.

Were you able to spot the critics? 99 percent of the time. I was working the line and I had my hands in everything. I was working the pass and expediting. I knew when they were here and I was cooking the entire meal for most of them. I was really blessed with opening reviews, and really happy with how the year ended — accolades from GQ, and Time Out New York, again, and New York Magazine, again.

Has the menu changed very much over the last year? The signature dishes have changed, we’re capable of printing the menu on a daily basis, so there are changes. There’s a change at least two times a week, at the minimum. One dish here, one dish there, a tweak here, an addition there. And then tremendous changes of course with seasonality. We just released an entire tasting menu that’s not on the a la carte menu, just the duck rice overlaps. Because people want to have that taste — they want to have that duck rice.

That’s often the first dish people mention when they talk about the restaurant. I never thought that the duck rice would be what it is today! I just thought as we were putting entrees together, "What are we missing?" What I wanted to do was a dish inspired by my childhood, by all the rice dishes that my mom would make. So I thought about some great classical Portuguese rice dishes that I could redefine, or reinterpret in my own way. And that’s how the duck rice was born.

What do you think you’re still learning about the restaurant, one year in? Customer relations. Front of the house stuff is very inspiring to me. It’s something that I’d like to become more in tune with, but you’ll never see me walking around my restaurant in a suit. Never. I hate prancing around – it takes a lot for me. Sometimes our hosts have to twist my arm to get me to go talk to a table, I’d rather have people come and see me in the kitchen.

What’s the most important thing you’ve learned about front of the house operations? Keeping my staff happy. Keeping them in a good mood so they can carry an authentic and real smile to the table. I think a true smile or a true happy personality reads true and authentic to the guest.

Have you been able to branch out and do more ambitious things than when you opened? I definitely have a lot more ambitious, um, things in my mind that will soon come to fruition. Yes, yes. Ambitious in a way that stays within these doors, ambitious for where to take Aldea further, and then down the line, there’s other things. Aldea right now is more than enough for me to handle, though.

So, you are here every day, for every service? This is my life here, you know? I don’t have anything else that I aspire to do. And when I open up a business in one of the greatest cities in the world, I don’t like to not be here. Yeah, I like to take part in charity, I like to do events, but there’s always that hunger, that desire. I want to be back in my restaurant.