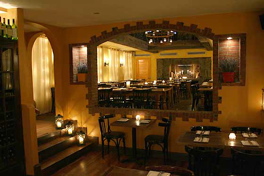 On a sleepy block of W. 10th there lies an unassuming, if not a bit random, tapas restaurant called Alta. By the looks of the place and the infrequency with which it is mentioned, one might expect that this is simply a neighborhood spot slinging above-average sangria and a short list of inconsequential Spanish wine. But beyond the subterranean entrance resides one of the finest collections of back vintage Rioja (with equally impressive lists of both Italian and French wines) that is virtually unknown to the New York dining public. What’s more: not only are many of the wines incredibly difficult to procure via retail sources (e.g. Giacosa’s 1990 Barbaresco Santo Stefano at $295; Quintarelli’s 1986 Amarone at $380), but on the off chance that you did happen to stumble across them, you’d be adding (at least) the price of a roundtrip flight to California on top of the numbers you see here.

Owner Christopher Chesnutt tends to the list, which, in the three years we’ve been blowing paychecks on its finds, has remained deep and incredibly low in price. But, this isn’t a list fashioned to boast incredible balance and a range of styles to rival a collection like The Modern’s. It’s simply an assortment of wines that Chesnutt likes to drink at prices that make them drinkable; it’s a list for plebeian wine lovers with princely predilections.

If you can, come prepared to spend $75 or more; it’s worth going a bit over your standard budget when these are your choices in range: ’96 Barolo Brunate from F. Rinaldi, ’96 Rioja Riserva ‘Vina Real’ from CVNE, and ’96 Ghemme ‘Colis Breclemae’ from Cantalupo. If you’re looking to spend around $50 or less you’ll do just fine, but the list’s sweet spot (between $75 - $150) warrants a raid of the piggy bank.

Bang For Your Buck
‘Brazan’ 1999, I Clivi $54
A rare trinket from the Friulian underground. Organic, old vines Tocai and Malvasia vinified via non-interventionist tactics. Funky, earthy, and dark in color due to extended macerations. Still drinking with incredible freshness at 11 years out.

Gassac Blanc 2005, Mas de Daumas Gassac $56
Often dubbed the Lafite of the Languedoc, Mas de Daumas and its curmudgeon of a winemaker have already been immortalized in many a book and movie for the transcendent nature of these exotic, farmhouse wines. The Gassac Blanc is a blend of Viognier, Chard, and Petit Manseng and is streamlined, aromatic, and quite delicate despite the varietals employed.

Cote-Rotie 1997, Duclaux $60
Syrah hailing from one of its spiritual stomping grounds at pricing that is almost too good to be true. An excellent value in old-school Cote-Rotie from a vintage that is drinking primo at present.

Barolo ‘Brunate’ 1996, Francesco Rinaldi $75
Francesco Rinaldi remains one of the go-to estates for traditional Baroli. This bottling (one of two cru flagships) hails from one of the most revered vineyard sites in all of Barolo. Here from the legendary 1996 vintage, at pricing below retail. Run.

Ghemme ‘Colis Breclemae’ 1996, Cantalupo $74
Single vineyard Nebbiolo from Ghemme, an area just north of Barolo and Barbaresco, here from the region’s finest producer and, once again, from one of the greatest vintages of the 1990s. This will gladly show its bones with a short skip in the decanter.

Off The Beaten Path
Crespiello 2003, Pulchrum $69
Only two sites in all of Spain produce wine from this rare grape varietal (also known as Vidadillo de Almonacid). The grape is ornery and obscure and may never find a significant place in the international market, so take this opportunity to rendezvous with its high aromatics before it slips back into extinction.

Under $40
Pettirosso Rose NV, Punta Crena $39
One of our favorite new producers out of Italy’s Riviera region. This is an unlikely blend of Sangiovese and Rossese (indigenous to Liguria) done frizzante, and it’s likely to conjure memories of pink bunnies and flame-retardant pajamas. In other words: it’s endearing, drinkable, and versatile.

Corbieres ‘La Demoiselle’ 2006, Domaine de Fontsainte $35
One of the quintessential value wines brought to you by the ambassador of Southern French artisan wine: importer Kermit Lynch. This blend of Carignan, Grenache, and Syrah is from a tiny appellation within the Languedoc and offers plenty of dark fruit, aromatic herbs, and vibrant acidity.

Crowd Pleaser
San Clodio 2008, Producciones Amodino $36
Primarily a blend of Treixadura and Godello, with some extra seasoning courtesy of Albarino, Torrontes and Loureiro, this hails from the Ribeiro region in Galicia—one of Spain’s most exciting regions for new production.

Chianti Classico 2005, Fonterutoli $48
For six centuries the Mazzei family (who still own this historic estate) has been making wine in the hills around Siena. Though their winemaking techniques have changed a bit over the last 600 years—they are now considered definably modern— the wines remain excellent. Forward and likeable without sacrificing complexity.

Break The Bank
Chassagne-Montrachet 1999, Marquis de Laguiche $125
A joint effort between Philippe Drouhin (of Maison Joseph Drouhin) and the Marquis, this estate is known for its uber-opulent Montrachet. This is one of only three excellent white wines produced under this label (the other from the 1er Cru site of Morgeot), and the outcome is classic, brawny Chassy that’s drinking in its wheelhouse right now.

Barbaresco ‘Santo Stefano’ Riserva (Red Label) 1990, Bruno Giacosa $295
Really too good to be true. Not only is this wine almost impossible to procure via retail sources, it would cost at least double this price if you happened to find it. This is truly a legendary bottling from one of Italy’s greatest winemakers. Decant. Behold.

Rioja Gran Reserva ‘Vina Bosconia’ 1968, Lopez de Heredia $285
Another legend from the estate that practically wrote the book on traditional Rioja. Again, pricing here is below what you’d find it at retail (it averages at about $325), and it tastes like hippies, sunshine, and history.

WTF?
Chianti Classico Riserva 1974, Felsina $175
Although it is always hard to predict when a wine is going to pack up and die, we’ve heard rumors that The Crypt Keeper and the GhouLunatics are eyeing this one for their next tale about how a once-stunning Chianti turned into mummy juice. Beware.