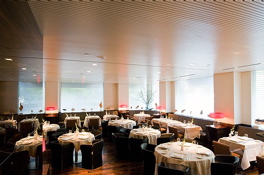 Fresh off last night’s JBF christening as “Best New Restaurant,” Marea, the latest swoosh by Michael White and Chris Cannon, secures this duo’s role as emissaries of all things haute-Italian in NYC. But this status is due to more than White’s well-known samurai skills behind the line. What is lesser known is that Cannon himself is a wine expert who intimately understands the genesis of a list. As a result, he has a sixth sense of sorts when it comes to talent.

Enter Francesco Grosso: the dapper, soft-spoken proof. Formerly of ‘inoteca and Alto, Grosso is one of the industry’s great professionals, and as Wine Director here at Marea, he has managed to fashion an Italian-centric list that is pleasantly populist—varied in style, approachable in its organization, and relatively succinct for fine dining—yet still manages to provide plenty for seasoned winos. Be forewarned, however, that Marea is not the place to go bargain hunting. The mark-ups are standard for this neck of the woods (i.e. a notch or two above standard), and the high-end is more “high-high” than high. Let’s just say you aren’t going to find a slew of interesting back vintage finds for under $200. The top-shelf is full of recognizable names that demand high price tags and need little explanation.

What does set Marea apart from its neighbors, however, is both its regional coverage and its cuisine-appropriate assemblage. Sure there’s a back page full of CA Cab and Rhone for those who dare risk the desecration of Michael White’s menu via a bottle infantile Araujo, but for the rest of us, the list is well-chosen. About 60 percent goes to white, rose, and sparkling; the remaining 40 percent is reserved for red. For those still averse to the idea of red wine with fish—fear not in Grosso’s hands.

Bang For Your Buck
Cava Brut Reserva ‘l’Hereu’ 2006, Raventos I Blanc $45
Truly one of the highest quality Cavas on the market. Extended time on the lees and a few years in bottle give this wine a savory croissant-like note to back up loads of crisp fruit.

Reuilly Pinot Gris Rosé 2007, Denis Jamain $40
Rose made from Pinot Gris grapes is a specialty of this small Loire Valley appellation. The color is barely there (given that the skins are pale), and on the tongue it tastes of doilies—lacy, delicate, and crustacean-friendly.

Mataossu ‘Vigneto Reine’ 2008, Punta Crena $65
Importer Kermit Lynch, the king of small production artisan wine, just acquired this tiny Ligurian house. The result—an old vine Pigato that might be the most intensely aromatic rendition of the grape available—is arguably the best value on the list under $100.

Aglianico ‘Tari’ 2007, Antonio Caggiano $48
Caggiano is responsible for some of the most amicable Aglianicos in Campania. The brooding varietal dubbed “the Nebbiolo of the South” finds its softer, leaner side with this bottling.

Loach 2007, Radoar $66
This estate of dollhouse proportions has the largest plantings of Zweigelt (a crossing of St. Laurent and Blaufrankisch originating in Austira) in Italy. Juicy, aromatic, and bound to play patty cake with seafaring animals.

Under $40
Gessami 2008, Gramona $40
A wonderfully sharp and floral still white from Penedes (Cava’s home base) made from two strains of Muscat, plus a little Sauv Blanc and Gewurz. Fresh and superbly aromatic.

Anthos 2008, Correggia $37
Brachetto generally comes in sweet bubbly form, but Correggia is one of the few producers vinifying it completely still and dry. Total doll of a wine—fruity, floral, and at its happiest with a slight chill.

Off The Beaten Track
L’Alycastre 2006, La Courtade $33
One of just three estates on the Île de Porquerolles, which is one of three tiny islands off the coast of Provence. This blend of Mourvedre, Grenache, and Tibouren is slightly orange and intensely floral.

Harmoge 2007, Prima Terra $110
Blend of Albarola, Bosco, and Vermentino done geek style by one of Liguria’s great winemakers, Walter de Battè. Aged in large barrel sur lie, a.k.a. under the skins and must, this is dark orange in color, but still retains plenty of freshness. One of the best wines produced in this style.

Pignol 1998, Bressan $138
This 100% Pignolo—an increasingly endangered varietal in its native Friuli—is hands down one of the coolest wines on the list. Complex, earthy, reclined and ready to go.

Crowd Pleaser
Muller Thurgau 2008, Pacher Hof $54
This mutant varietal invented in the late 1800s is now one of the most widely planted new breeds in all of Europe. Clean, aromatic, and huggable.

Vareij 2006, Hilberg-Pasquero $52
The buoyancy of the Brachetto grape and the mouthwatering acidity of Barbera birth a light, effortless wine that’s also quite lovely with a slight chill. A perennial darling for warm weather dining.

Break The Bank
Brut Blanc de Blancs Grand Cru ‘Initial’ NV, Jacques Selosse $345
Selosse is one of the region’s true mavericks. In his advocacy for terroir, he has forced producers and consumers alike to change their expectations of Champagne. His ‘Initial’ is a blend of three vintages that’s disgorged after two years. Singular, perspective-changing bubbly.

Chablis Grand Cru ‘Les Preuses’ 1999, Dauvissat $300
Classic top-tier Chablis from one of the legends. Loud and forward, yet precise on the palate.

Barbaresco ‘Valeirano’ 1996, Ada Nada $170
Despite the under the radar status, Ada Nada produces some of the greatest value-driven Barbaresco that mixes modern sensibilities with a big dose of restraint. Classic vintage, drinking knightly now.

Volnay-Santenots 1er Cru 1993, Robert Ampeau $165
One of the most respected men in Burgundy, Ampeau releases his wines only when they are ready to drink—an old school quirk that suits him well. His wines have always been of incredible value, as well as classic examples of their respective terroirs.

WTF?
Cabernet Sauvignon ‘Cask’ 2006, Rubicon $250
Of course the name recognition aspect of this choice makes sense, but right now this is all oak and evil that stands to destroy just about everything on the first two-thirds of the food menu. Bring it to a barbeque instead.
WineChap is a start up that seeks to foster more intelligent boozing by demystifying the culture that surrounds restaurant wine lists. Currently the site boasts more than 160 wine list reviews in New York City.