Share All sharing options for: Dell’Anima’s Scrapbook from the Italian Road Less-Traveled 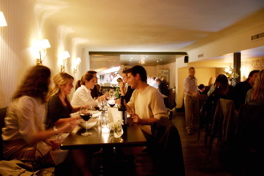 With the crew behind Dell’Anima opening a new wine bar—Anfora—just next door, we decided it was time to check back in with the list at the little jewel box of a restaurant that started it all. Few things have changed. The conglomeration of Italian goodies still reads more word search than wine list, but however dizzying it may be to read, the story that sommelebrity Joe Campanale has sought to tell remains clear.

It’s as if he started in Friuli and journeyed southbound, combing enotecas for the dusty rejects no one has looked at for a decade or more (see: ’99 Jermann Vinnae, ’99 Michele Satta Vermentino, ’96 Colonnara Tornamagno, etc.) in order to boldly fashion his very own vinous scrapbook of memories from the Italian wine road less-traveled. It’s truly one of the most personality-driven lists in the city, as Campanale pulls no punches when it comes to his palatal preferences. That’s not to say that he shuns the mainstream, but rather that he’s more comfortable when challenging expectations. And frankly, anyone who has consistently fought to keep a back vintage Soave and Tuscan Vermentino on his/her list deserves a medal for bravery.

To this day, dell’anima’s list showcases the Babbo alum’s wide-eyed enthusiasm for both the weird and the classic, not to mention his dedication to offering a whole hell of a lot of wine with bottle age in a variety of price points (from ’96 Musella Rosso Veronese at $42 to ’88 Sassicaia at $1200). This is a tough task that requires plenty of hunting to maintain, and we’re pleased to report that with two restaurants and a wine bar now under his watch, the young somm is far from tiring.

Bang For Your Buck
Ribolla 2007, Movia $62
One of our all-time favorite producers. Born of the biodynamic, non-interventionist canon, Ales Kristancic puts out some of the coolest and most affordable wines in all of Italy—despite technically being in Slovenia. Rich, dense, slightly oxidative Ribolla with uncanny clarity.

Carricante 2005, Calabretta $46
Hailing from one of Sicily’s unique and exciting terroirs—the volcanic soil vineyards around Etna—Calabretta fashions this old vines Carricante. Only 2,000 bottles a year are made, and the wine, like all of Calabretta’s wines, is only released once it’s ready to drink. A grippy, full-bodied testament to this area’s terroir.

Barbera ‘Vigna Clara’ 1998, Viberti $58
Old-school Alba Barbera with plenty of fruit, clean acidic striking power, and that loveable funk. One of the best Barbs one can buy, especially at a decade out.

Negroamaro ‘Notarpanaro’ 2004, Taurino $46
Cosimo Taurino is one of the first winemakers to produce and bottle wine from Puglia, as well as one of the men responsible for transitioning the region’s culture away from bulk wine production. Aged three years in barrel and three in bottle, this baby is all warm Puglian fruit and dirt.

Off The Beaten Path
Soave Sant’Antonio’ 1998, Pra $76
What the hell is this? Ask anyone born before ’75 what they think about the Soave DOC and they’ll likely spit on your feet. But Pra’s oak-aged Sant’Antonio is one of the finest cases made for the intrigue and age-worthiness of Garganega. Golden, slightly oxidized madness. Pack your sense of adventure.

‘Rosso del Monjebel 5’ NV, Cornelissen $150
Cornelisson is one of the most extreme winemakers in all of Italy. This Belgian ex-pat has stationed himself in the Etna DOC (a hotbed for progressive winemaking as of late) and now bottles several mind-boggling whites and reds. This 100% Nerello Mascalese bottling conjures comparisons to the slightly lean, earthy reds from the Jura. A blend of fruit from two vintages, this is certainly one of the most interesting wines out of Italy at present.

Under $40
Favorita ‘Grangia’ NV, Elvio Tintero $38
Favorita is a little known grape varietal that calls Piemonte home. It’s said to be a relative of Vermentino and sports the herbal, salinic characteristics found in the Vermies from neighboring Liguria. This is a fresh, slightly frizzante bottling from this Kermit Lynch Moscato d’Asti producer.

Barbera d’Alba 2006, Vigna dei Dardi $40
No reds under $40, but no matter—this is worth the extra buck. Vigna dei Dardi is one of our favorite reclusive producers rarely spotted outside its meek La Morra abode. This is classic, earthy Barbera, with pure fruit and tons of personality. Dollar for dollar, one of the best values on the list.

Crowd Pleaser
Sylvaner Valle Isarco 2007, Kofererhof $50
The Prince of Alto Adige or the Knight of the Suditrol, if you will. Completely organic well-tended fruit births a small masterpiece. A bombastic display of spice and mineral, with a solid core of ripe citrus.

‘Kajanero’ 2005, Vestini Campagnano $46
Campanian jungle juice. Just about the most charming Pallagrello Nero (a grape not known for its youthful nicety) you’ll ever have the pleasure of stumbling upon. Bright and forward with a dusty periphery.

Break The Bank
Ribolla Gialla 2000, Gravner $125
Gravner is the leader of the non-interventionist winemaking movement in Fruili and one of the most captivating artisan winemakers in Italy. This is a rare peek into his work from the pre-Amphora days, but it is still thoroughly quirky, so do not enter without a penchant for the brilliantly off-beat.

Nieddera ‘Barille’ 2000, Contini $100
Contini is one of Sardegna’s great producers and is responsible for the resurrection of many of the region’s indigenous varieties. This is their homage to the nearly extinct Nieddera grape (though there is a small addition of Caddiu), a varietal that produces big burly wines with plenty of rusticity. Tastes of wild stallion.

Barbaresco ‘Montefico’ 1985, Produttori di Barbaresco $325
Piedmont’s favorite cooperative is always a solid go-to for exceptional value in traditional Barbaresco. The ‘85s are still slinging plenty of fruit, and this particular single-vineyard bottling is in its zone. Will sing with a spin in the decanter.

Brunello di Montalcino 1988, Talenti $225
One of the godfathers of Brunello, Piero Talenti and his Midas touch has been tickling us under the chin for as long as we can remember. Many of the ‘88s from Tuscany are in their prime at present, and this one is accessing the basement of our brain with all of its smart integration. Earthy, lean, and floral—about as elegant as Sangiovese gets. A gracious gift from JC in this price point.

Chianti Classico Riserva 1982, Castell’in Villa $195
One of the greatest producers of traditional, age-worthy Chianti, here from the iconic ’82 vintage. Evolved and complex, with a solid core of dark fruit still holding steady.

WTF?
Terra di Lavoro 2005, Galardi $225
This is definitely one of the most exciting Aglianico-based wines out of Italy—a cult collectible for good reason—but it’s acting adolescent at present. Needs more time to sit in its room and listen to Smashing Pumpkins before it is ready to do anything that isn’t full of displaced angst and awkwardness.
WineChap is a start up that seeks to foster more intelligent boozing by demystifying the culture that surrounds restaurant wine lists. Currently the site boasts more than 160 wine list reviews in New York City.