Snack Folks Give in to NIMBYs, Change Barcar to The Arden

Share All sharing options for: Snack Folks Give in to NIMBYs, Change Barcar to The Arden

For at least the past month, the owners of neighborhood restaurant Snack Taverna have been embroiled in a fight for the survival of their space across the street at Morton and Bedford (originally called Barcar). There were harsh words, harsher signs, and allegations of barks being worse than bites—never a good sign. To the restaurant's credit, they just want to get along. In what looks like a win for the NIMBYs (but in actuality may be a win for the neighborhood), the Snack folks have put up a sign detailing their new plans.

The informational sheet highlights the concerns neighbors had for the previous space—the closing time, the full liquor license, the size, the "lack of regard for West Village history," and so on—and spells out the ways in which the owners have acquiesced to said concerns. Basically, they're changing the entire concept, since Barcar revolved around the idea of classic cocktails.

The new restaurant will be called The Arden, and will still be open for breakfast, lunch and dinner. "The name derives from the small street that ran until 1829 from the sight [sic] of the restaurant" (West Village history!) and it will be inspired by "some of the great Cafes, Delicatessens, and Butcher Shops in New York City." It also says they're hoping for an "early-Autumn" opening date.

The hours of operation have been changed to 8:30am-12:30am, the same as at Snack Taverna, and they are currently applying for a beer and wine license, having scrapped their plans for a full liquor license as yet another concession to the neighbors that be. The full letter: 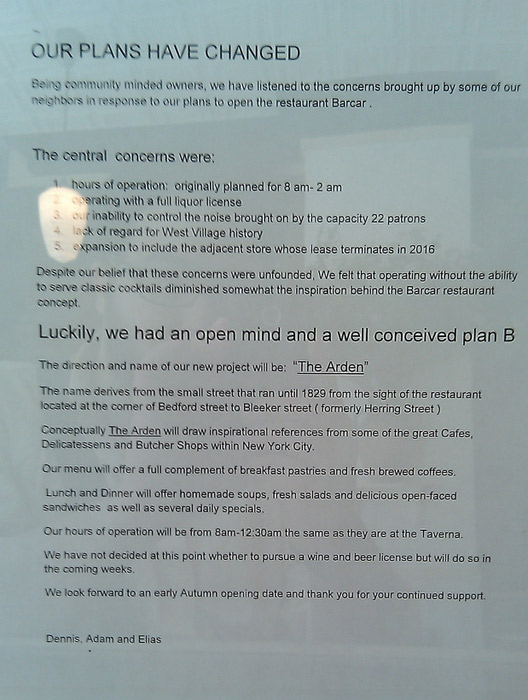