Betting on Belmont at McGuinness's Pub in Sunnyside

Share All sharing options for: Betting on Belmont at McGuinness's Pub in Sunnyside 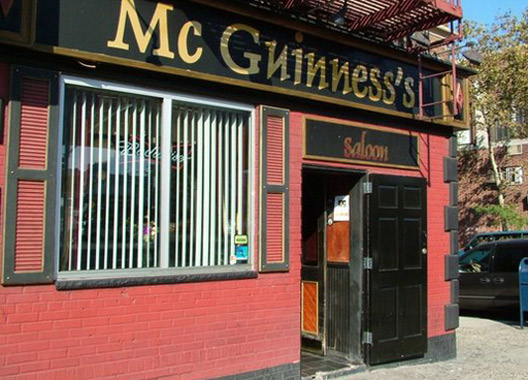 It's ten degrees hotter inside McGuinness's Pub than it is on Queens Boulevard. It's not clear if they don't have air-conditioning or just don't use it. Proof that melting-pot Sunnyside still has an Irish population sits at the bar. Every barstool is filled at 4 PM on a Wednesday, and many of the tables. It's a small joint. I wouldn't call it cozy. "Close" is more the word. It fills up fast.

There are six televisions and four of them are tuned to Belmont Park. They are watched closely—an OTB station is just down the block. Many of the afternoon drinkers are hunched over racing guides. A woman (the only female better present) in a blue sweater tells her companion, who wears a polyester sports jacket and a too-long striped tie, about her new "system." A tall, thin man in a t-shirt that says "Property of Celtic Building Supplies" is at the bar. Possibly the youngest better in the room, he mutters to himself and gets up nervously from his stool about every five minutes, heading out into the daylight for a smoke or a chat. Behind him he'll leave the racing form, a pack of butts, some of his money, his beer and a torn up ticket or two. Nobody touches anything, except the shiny-faced old sop on the next stool, who kindly returns the red pencil the thin man catapulted into the air when he slapped his palm against the bar. The sop is drinking Irish coffee.

The bartender, John, is kept pretty busy. He's not much for small talk. For a barkeep in an Irish dive, he makes more Martinis than you'd expect, and constructs them with some care, carefully crossing one toothpick skewering three olives with another piercing a single olive. These go mainly to the far end of the bar, where two women and a man with no interest in the ponies talk about the depravity of the videotaped beheadings of radical Islam. Bar talk.

There are old pictures on the wall to show you that stuff used to happen in Sunnyside. Boxer James J. Braddock scored an upset, defeating Max Baer for the World Heavyweight title on June 13, 1935, at the nearby Madison Square Garden Bowl on 48th and Northern Boulevard. In 1950, Willie Sutton pulled off a daring daytime bank robbery at the Manufacturers Trust Company in Sunnyside. Those places are gone now. A block away, in apartment #1G, 43-30 46th Street, alcoholic jazz legend Bix Beiderbecke died in obscurity in 1931. But there's no photo for that.
—Robert Simonson