CB3 Piles on the Rejections for the Upper Avenue A

Share All sharing options for: CB3 Piles on the Rejections for the Upper Avenue A 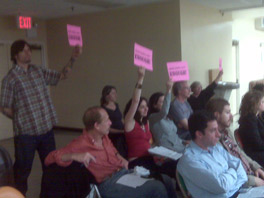 Another month, another contentious, endless community board meeting. Oversaturation on Avenue A dominated the meeting and a huge turnout from residents ended up dooming several applications. But, before that, there was trouble for Baohaus’ Eddie Huang and Freemans:

1) The night got off to a dramatic start, when Lower East Side staple Freemans went before the board to renew its liquor license. The restaurant has had a long, troubled history with CB3, with the owners last appearing in February for a second floor expansion that was ultimately approved after they agreed to add a security guard to the restaurant’s signature alley to keep the noise down. Although that didn’t stop neighbors from complaining last night, the restaurant was ultimately granted a renewal.

2) Next up was the start of several showdowns between Avenue A residents and restaurant owners. First up were the owners of the former Avenue A bar The Raven (194 Avenue A), which fell victim to a fire in 2006. The owners, who were attempting to transfer the license for the second time, were foiled again in their attempt to transfer to a new Mexican restaurant coming to the space, El Camion. Dozens of residents held up pink “Northern Avenue A says Enough” signs and stood up to protest the license transfer. After debating whether or not it qualified as a transfer after four years, the board ultimately decided to reject the license.

3) Eddie Huang’s Baohaus follow-up, Xiao Ye (formerly Crackhaus), withdrew its application for a license at 198 Orchard at the last minute because of a minor application oversight. After first chastising the restaurant’s representatives over the original name (which was ultimately rejected by the state), the committee noticed that the owners had overlooked a stipulation in the application that requires the applicant to contact a neighborhood block association before appearing before the committee. So, despite what one board member called an “otherwise immaculate” application, the restaurant’s reps agreed to withdraw their license till the next meeting. Although Huang takes over the lease from sushi restaurant Blue Elm on June 1, the license issues may also mean a delay for the originally planned mid-June opening.

4) The Avenue A protesters struck again throughout the night, striking down a sidewalk café application for the East Village branch of Westville, because of overcrowding and traffic concerns. Rejections were also issued for a still-unnamed Cajun themed restaurant/bar at 503-505 East 12th Street and another restaurant/bar combo called Percy’s at 210-212 Avenue A (the former Al Diwan space). Both were rejected because of a common complaint among residents, who said their operating hours indicated they were more interested in serving drinks than food.

5) The board debated a yet-to-be-named hybrid bar/art gallery/ home design and electronics retail space at 9 Clinton Street. After commending the owners for presenting something original, the board almost voted to approve the venture, but backed out at the last minute when the owners requested to have a live DJ twice a month for gallery openings.

6) Although the old Allen & Delancey space was on the agenda, no one showed up to represent the restaurant. The committee revealed that the space had been seized by the landlord who had put the space on the agenda in case any interested buyers turned up before the meeting and wanted to fast track the liquor license transfer.
—Thomas Garry