The Lion’s High-End In Need of a Samson

Share All sharing options for: The Lion’s High-End In Need of a Samson

Welcome to Eater's newest column, Decanted, in which WineChap's Talia Baiocchi guides us through the treacherous world of New York wine lists. Today: The Lion. 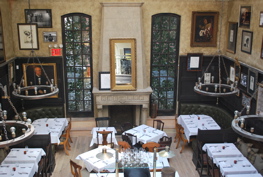 This predestined celebrity hangout comes courtesy of chef John DeLucie, also of the Waverly Inn, a restaurant known for its unabashed attempt to lock its doors to the dining proletariat. But The Lion is different. It has a phone, and it will allow people who do not know Demi Moore to make a reservation. It also has a brief wine list (under 100 selections) that is two-parts reasonable. Turns out you’re safe if you stick under $100, where the wines are classic (leaning on Old World), well-chosen, and offer plenty to play with under $50; but God help you if you dare venture into the reserve section, or perhaps more fittingly: the Lion’s den. This is a savage place in need of Samson where the mark-ups give any number of MePa nightclubs—with their gypsy margins on Dom and Veuve—a real run for their money. In fact, they’re some of the worst we’ve ever seen (see, for example, ’98 Quintarelli Amarone at $1,065).

The A-team from Burgundy and beyond are showcased here, with legendary back-vintage bottlings from the likes of Comte de Vogüé, Mugnier, Margaux, Cos d’Estournel, etc.; it’s an impressive list that even if priced to move would be expensive, but with almost all of these wines at more than twice, and in some cases three times their retail price, it’s borderline belligerent. So stick to the selections on the bottom-end, where the mark-ups seesaw near standard. And if you dare enter The Lion’s high-end den, consider yourself forewarned.

Bang for Your Buck
Txakolina Rosado ‘Rubentis’ 2009, Ameztoi $45
Even if the waiter pours this pink Txocoli (Basque frizzante wine) without the usual dramatic flair (i.e. stands on a chair and pours from two feet above the glass), this distinctly fizzy and mineral-driven wine is about as sprightly as it gets.

Vino Bianco 2007, Channing Daughters $42
CD is a winery based in Bridgehampton, NY that has been putting out some of the quirkiest original wines on Long Island for some time. This wine is an ode to the great “Super Whites” of Northeast Italy. Its blend of Tocai, Sauvignon, Pinot Grigio, and two separate clones of Chardonnay makes it one winsomely fruit-forward little bottling.

Gruner Veltliner ‘Lamm’ 2003, Hirsch $68
Not your average chug-worthy GruVe. Instead, this is proof that this varietal is capable of producing some of the headiest, most savory whites on earth. This wine, from one of Hirsch’s great site holdings, is broad and rich due to the heat of 2003, but it still retains all of the bracing acidity so characteristic of this varietal.

Anjou 2008, Chateau Soucherie $42
One of the great, though minuscule, producers in the Loire valley known for Chenin Blanc, but they also have skills with it comes to Cabernet Franc. This has classic CF aromatics, with plenty of snuggly fruit.

Ribeira Sacra ‘Pena do Lobo’ 2008, D. Ventura $50
Marked by steeply terraced vineyards (some carved into the hillsides by the Romans 2,000 years ago) and the broody and still somewhat obscure Mencia grape, Ribeira Sacra is one of the coolest up and coming regions in Spain. This result is all clamorous aromatics and moody fruit.

Under $40
Nothing but tumbleweeds.

Crowd Pleaser
Albariño 2007, Do Ferriero $54
Easily Spain’s finest Albariño producer. Even this entry-level bottling sourced from younger vines has more heft to hug than your average Albariño. Waxy, mineral driven, and buddy-buddy with almost everyone.

Costières de Nimes 2007, Chateau la Baume $45
The Costières de Nimes is an appellation that occupies a space between the Rhone and the Languedoc; it was formerly a member of the latter appellation, but has since been kidnapped by the Rhone. This blend of Syrah, Grenache, and Carignan is a classic example of the wines from this area: dense and aromatic, but fruity and easy to over-consume.

Off The Beaten Track
Alta Gama Reserva 1999, Santa Rufina $72
Often overshadowed by the neighboring hotshot region of Ribera del Duero, Cigales is a little known destination on the Spanish wine trail, and Santa Rufina is one of less than 50 producers working in the area. This particular bottling is a savory, altruistic expression of Tempranillo that’s drinking well at 11 years old.

Break the Bank
Pernand-Vergelesses 1er Cru ‘Ile des Vergelesses’ 2001, Chandon de Briailles $105
This Burgundy estate in Savigny is both historic and traditional, and this bottling—from the finest 1er Cru vineyard in charming Vergelesses—is in a great spot now at surprisingly inoffensive pricing.

Vosne-Romanee ‘Aux Mazières’ 1999, A. – F. Gros $198
She may be fairly new to the game, but Anne Gros is already considered one of Burgundy’s greats. She employs both modern and traditional vinification practices, yielding wines that are opulent, but pure. This is a special village-level cuvee from the classic ’99 vintage that is difficult to hunt, and it’s one of the only wines on the reserve list that isn’t viciously overpriced.

WTF?
Amarone della Valpolicella 1998, Giuseppe Quintarelli $1,065
Psychological torment for the wine lover in all of us. Simply one of the most sinister mark-ups we’ve ever seen. Ever. Just to give you an idea of how bad this is: the wine retails for around $350, the legendary 1990 can be found at Del Posto for less than this, the excellent 1993 was recently offered at ‘inoteca for $390, and the ’86 is currently at Alta for $380. And lastly, this wine isn’t exactly ready to drink.

Musigny 2001, Joseph Drouhin $1,080
Another gypsy addition. The wine retails for $400 at the very most and hence is at least $400 dollars more than it should be on a wine list. Samson, kindly slay.

Margaux 1996, Chateau Margaux (375ml) $960
First growth plus great vintage always opens the door for opportunistic pricing, but this is yet another wine priced more than twice its retail price. We’d rather break our own tibia than spend this much on a half bottle of 14 year-old Margaux.
· Previous Editions of Decanted [~ENY~]