The Lunatic Periphery Finds a Home at Vinegar Hill House

Share All sharing options for: The Lunatic Periphery Finds a Home at Vinegar Hill House 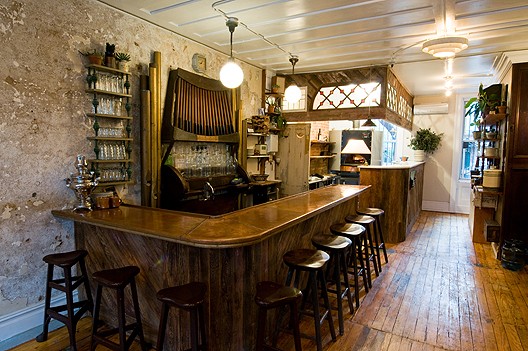 Here in the U.S., the natural wines movement is just now beginning to burrow into our mainstream consciousness via a group of spirited wine writers, importers, and sommeliers. But the movement is nothing new in France, where the pot-smoking visionary winemakers responsible for building it have been adding prophets and disciples to their lunatic periphery for more than ten years. And Bill Fitch, wine director at Vinegar Hill House, is no stranger to its evolution either. After consulting on countless wine lists here in the city from 1998–2004, he spent five years living in Paris, drinking in the city’s natural wine bars and visiting many a pot-den-cum-wine-cellar in the Loire Valley and beyond. He personally knows many of the winemakers who make up his list at Vinegar Hill, and he understands what’s viable when it comes to natural wines (i.e. what’s good wine, and what’s justification for a flawed wine going through secondary fermentation, if you will). It is for this reason that his short collection is one of the best of its kind—not to mention the fact that the mark ups are rarely more than twice the wholesale price, making it the only spot outside the Olive Garden to harbor this many wines around or under $30.

The list also knows its neighborhood and the willingness of its settlers to experiment (i.e. there may not be a better place than Brooklyn to spring the natural wines of Limoux on the U.S.), but it pays no disrespect to the not-so-experimental among them. What we mean is: it’s not all orange and slightly oxidized up in here. Yes, the majority may fall into the “traditionally untraditional” category, as Fitch explains it, but they’re all good wines. Still, if you’re feeling a little uneasy about, say 100% Fer Servadou from Marcillac, there are plenty of selections that trade exoticism for hard-nosed classicism, albeit in the hands of small-production, organic producers.

Chablis 1er Cru ‘Vaugiraut’ 2006, Oudin $52
Under the radar producer with two tiny 1er Cru holdings in Chablis. This is old school Chablis through and through—mineral-driven, racy wine that demands the octo.

Babiole 2008, Andrea Calek $45
A card-carrying member of France’s lunatic periphery, Calek is a freak of monumental proportions. He lives in a trailer amongst his vines in Ardèche (SW France), but his wines—when he nails them—are beautiful, raw representations of the varietals and their terroir. Babiole is just that: medium-bodied, versatile, and honest.

Primitivo Di Giola Del Colle ‘Antello delle Murge’ 2005, C. Guttarolo $49
One of the great artisan winemakers in Southern Italy, Guttarolo puts out minuscule quantities (less than 1,000 cases of wine are produced each year) of true terroir-driven juice. The Antello delle Murge—with its palate of meat, minerals, and magic—earns Guttarolo the right to spit on every other producer in his general Puglian vicinity.

Off The Beaten Path
La Mothe 2007, Domaine Pechigo $35
This blend of Chardonnay, Chenin Blanc, and Mauzac might be in improbable crew, but it’s also one of the great natural wines on the market today. It’s dry, but still quite rich, something you might expect from the joined forces of Chenin and Chard. Super aromatic and slightly oxidized. Geeky, but accessible for the non-nerd crowd.

Dinga? 2005, Dinga? Vinarija $65
Croatia is likely one of the more random appearances on wine lists in the U.S., but the country is no stranger to serious winemaking or wealthy American tourists. Dinga? is considered the finest of Croatian wines, and is so distinctive in fact, that it’s protected under the Geneva Convention. Seriously. It hails from the south slopes of the Peljesac Peninsula and is comprised of the brooding, sensitive Plavac Mali grape.

Under $40
Cour-Cheverny ‘Le Porte Doree’ 2006, Philippe Tessier $32
Big, gregarious wine from a tiny appellation in the central Loire—the only place where this varietal (Romarantin) is produced. No shortage on aromatics, a solid core of silky ripe fruit, trademark bitter almond, and plenty of acidity.

Crowd Pleaser
Gruner Veltliner 2009, Berger $38
The famed cheapo soda pop-topped organic producer and their uber value-driven 1L GruVe separates the boys from the men. This is essentially a 40 oz. for grown ups—crisp, likeable, and party-starting.

Castel del Monte ‘Melograno’ 2007, Santa Lucia $29
One of the many ancient Greek varietals that has found its way back en vogue. All organic, with a minimal addition of sulphur, produces a wine with soft, forward fruit, and plenty of earthy intrigue.

Break The Bank
Grand Cru Brut ‘Initial’ NV, Jacques Selosse $180
The pricing on this wine may alone warrant a visit. It’s the cheapest we’ve ever seen this wine on any list—most list it for $300-$325—and for those who do not know: Selosse is one of the region’s true mavericks. In his advocacy for terroir, he has forced producers and consumers alike to change their expectations of Champagne. His ‘Initial’ is a blend of three vintages that’s disgorged after 2 years. Singular and perspective-changing.

Saumur Champigny 2004, Clos Rougeard $110
The rarest and most sought-after Saumur to be had, this is the finest example of Cab Franc in this terroir, period. Barnyard, smoke, minerals, and some seriously moody black fruit. Lap in the decanter recommended.

WTF?
Carignane ‘Testa’ 2008, Coturri $49
Now when it comes to the top of the natural wine movement, we can get down with the weird and unpredictable, but when big fruit gets oxidized, it’s just gross. Tony Coturri delivers on many of his wines, but they can be inconsistent, and when they slip up they drink like baked goblin. So beware.
WineChap is a start up that seeks to foster more intelligent boozing by demystifying the culture that surrounds restaurant wine lists. Currently the site boasts more than 160 wine list reviews in New York City.