Port 41, The Bikini Bar in the Shadow of the Port Authority

Share All sharing options for: Port 41, The Bikini Bar in the Shadow of the Port Authority 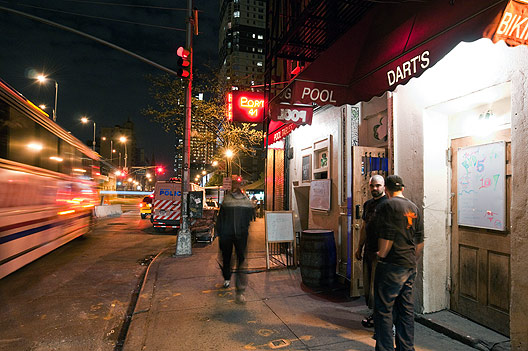 This bar is nestled between the twin transportation evils of Port Authority and the Lincoln Tunnel. It smells of bus exhaust and stale sweat, with faint traces of fried oil, which could either be the free hot dogs, or the popcorn machine. A sign near the cash register reads "There is no sleeping anywhere in the bar." Perhaps in an effort to stave of this possibility, one soft-fleshed old man changed seats every ten minutes.

So, rather than whistle or catcall, they talked to her, about this and that and the other thing. She liked talking. At one point she stated that, if she ever went for women, her type would be something along the lines of Michelle Rodriguez. "She's hot!" she said. That stopped conversation dead for a good 30 seconds, as those men who were paying attention briefly took time to imagine the two women together.

The Russian was wearing a black two-piece and some fish-net stockings. It was more along the lines of elaborate lingerie than a bikini. For all the skin she flashed, she was not the sexiest woman in the bar. That honor would go to the only other female there, a tall, lanky brunette. I don't know who she came with, but she left alone, and made quite an exit. After one affable blue-collar goosed her, she swung around, yelled "What the hell do you think you're doing?" and walloped the beefy gent upside the head with a force that won the stunned admiration of the room. "He pinched me in the ass!" she screamed in righteous indignation, apparently believing that such a thing would, and should, never happen in a roughneck bikini bar in Hell's Kitchen.

The struck man fell in surprised wonder. He looked exactly like a 10-year-old who'd just been punished. "I was just kidding around," he whimpered. The big brunette, unmoved, body-slammed him into the door jam as she left. No one chased after her. The injured man didn't even seem that angry. And why should he be? The altercation provided him and his pals with something good to talk about for the rest of the evening, as they smoked on the sidewalk and watched the tour buses rumble by.
—Robert Simonson