In a move that is becoming almost commonplace in a time where chefs tweet to critics, publicly rant about bosses, and trash other restaurateurs in 140 characters or less, the good folks at Faustina took to the social media after this week's one star review from Sam Sifton. And by the looks of it, chef Scott Conant (on Facebook) and GM Jeffrey Tascarella (on Twitter) were none too pleased with Sifton's onespot that praised the food but not the vibe. Fuckface was a nice touch.

Thus, the celebration party at the restaurant last night was more somber than expected. Per Nightline' Sarah Rosenberg: "Now at Faustina - all marinating in the Sifton review. Mixed emotions: confusion. Elation. Pissed off-tion. Ultimately, all raising a glass." Update: We didn't realize Conant was on the Twitter. Please see below. 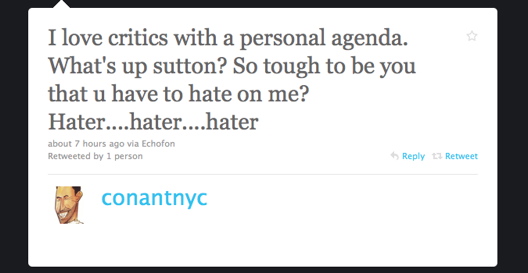