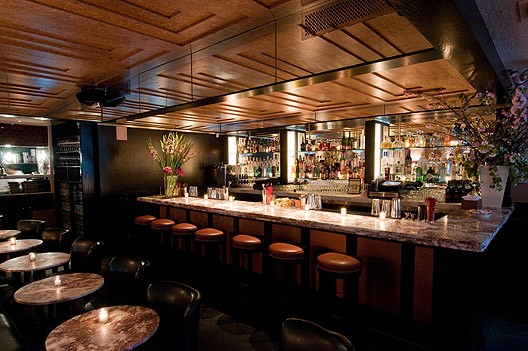 After The Beatrice Inn closed earlier this year—narrowly avoiding the descent into becoming a complete parody of itself—owners Paul Sevigny and Nur Khan decided to clean up the party, take it above ground, and venture into the world of proper restaurants. For their first foray, Kenmare, they snagged Joey Campanaro (of Little Owl and Market Table fame) to man the kitchen, and Tracy Gribbon, manager of said Owl, to captain the wine program.

The list—a little more than 50 selections split between Old and New World, most of which fall below the $75 dollar mark—offers plenty of affordable options that suit the cuisine. What it lacks, however, is inspiration.

The producers are strictly Top Forty (i.e. hardly the most character-driven or adventurous for their region/price point), and the majority seems to have been drawn from a single importer portfolio. This is surely a let down, but it’s the obvious Veuve-y trap (sinful inclusion of Veuve Yellow Label at more than three times the retail price), and the inexplicable—and inexcusable—spelling errors (e.g. Mersault, Peneès, Cliquot) that sting. And all the more so when one considers the competition. Take Perilla, Vinegar Hill House, Trestle on Tenth, or Bussaco: the lists at each of these spots manage to provide the diner with more excitement and character in 50 selections than many lists do in 150 or more. In short, the proverbial bar is rising as more somms manage to pack a progressive punch into small lists, and as a result, we’ve come to expect a little more from efforts like Kenmare’s. Time to step it up.

Bang For Your Buck
Falanghina 2008, Taburni Domus $52
A textbook interpretation of this ancient Campanian varietal. Tastes like brine and orchard. Weighty enough for bird, yet focused enough for crustacean.

Urbezo Crianza 2005, Solar de Urbezo $52
With a little wisdom gained from four years in bottle, this blend of Tempranillo, Cab, Merlot, and Grenache from Cariñena (east of Rioja) is easily the most reclined and complex wine under $75.

Under $40
Sangiovese di Romagna Superiore 2007, Villa Bagnolo $37
Emilia Romagna gets a bum rap for slinging Lambrusco, but there’s more to this region than red fizz. Although Sangiovese is more charm bracelet than warrior varietal when produced here, its chug-worthy enchantment is hard to hate.

Crowd Pleaser
Gavi 2008, Ca Aqua $43
Gavi is located within the Piedmont region of Italy, just South of where the region’s bills are paid (Barolo). The grape: Cortese. The point: diplomatic, likable, and well constructed for the price.

Rosso di Toscana ‘Gode’ II’ 2007, Poggio Amorelli $47
Old-school Chianti blend of Sangiovese, Canaialo, Trebbiano, and Malvasia that, since the 2006 prohibition of white grapes in the Chianti blend, must be labeled without the Chianti Classico designation. Bright, straightforward, and versatile.

Off The Beaten Track
Tannat 2006, Cambiata $82
Tannat is an overpowering kick your ass in a bar kind of varietal that’s rarely taken on alone outside of Uruguay and France’s Madiran. Needless to say, it’s quite rare to find it in CA’s Monterey County, where it’s boasting its trademark beef and brawn, but it’s still huggable enough to drink straightaway.

Break The Bank
Brunello di Montalcino ‘Montosoli’ 1997, Altesino $300 (off the forthcoming short reserve list)
Altesino’s single-vineyard Montosoli is one of the region’s great standard bearers, straddling the line between modern and traditional with grace. Considering this is the vintage that sent everyone into hysterics, the pricing on this remains very fair. Will show some leg after a short decant.

WTF?
Brut NV, Veuve Clicquot Ponsardin $175
The Veuve-y trap is the oldest lowbrow trick in the book. Here we find this benign bubbly marked-up more than three times its retail price to hook unassuming diners and patrons in a celebratory fog. The kind of cardinal sin that risks demon possession, Wiccan hexes, and eternal damnation.