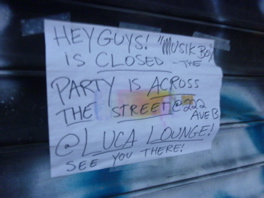 1) Hudson Square: The short lived Dog Ear Tavern over on Hudson Street has closed. It is now called Samalita's. [ShutterWire]

2) Midtown: Midtown Lunch reports that Spoon City, a custard/soup shop on 33rd between Madison and 5th, is gutted. [ML]

3) West Village: A commenter and a tipster report that Gonzo on West 13th Street is not on hiatus, rather it's permanently closed. The number has been disconnected. [ShutterWire]

5) East Village: EV Grieve notes that Hala Pita on Ninth Street near Avenue A closed after a little more than a year in business. [EVG]

6) Midtown: Midtown Lunch posts a reminder that today is the last day for Panini Tozt, a sandwich shop that is sits in a building slated for demolition. [ML]

7) East Village: A note on the door informs locals that Musical Box on Avenue B near 13th Street is closed. [EVG]