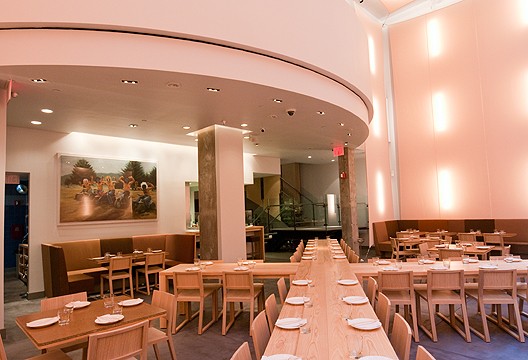 In both the size of the former Town space, as well as in the décor’s subtle attempt to nudge Chang’s brand of reclaimed wood minimalism toward elegant, we are reminded that we’re not in the East Village anymore. But that doesn’t mean we’d call Má Pêche a Midtown restaurant. All doubts on such an assertion should be directed toward the wine list, which makes no attempt to turn down its volume for the power lunch crowd. Christina Turley, Momoverse’s sommelier-at-large, is known for her daring wine-pairings at Momofuku Ko; here, under the guidance of Momo Bev Director, Colin Alevras, she’s fashioned a cuisine-appropriate list that spends most of its real estate (quite minimal at just over 60 selections) traversing the margins.

From the wines of Abe Schoener’s psychedelic Scholium Project to the five selections from the Jura to the dry wines of Hungary (Furmint, Juhfark, and Pinot Noir) to the sparkling wines of Southwest France (hailing from Gaillac and Limoux), it’s clear that Turley isn’t about to go all Jordan Cabernet on us for the sake of a few suits. That’s not to say, however, that the list isn’t without the recognizable. The USA section offers refuge for those looking to get in and out sans an education in the road less traveled.

As for pricing, it’s a bit opportunistic here and there (particularly on the high-end), but the markups on wines under $100, which do make up the majority of the list, stay consistent at standard. And given the kind of character that many of them offer, it isn’t hard to leave feeling like you got a deal. Still, for those making the hike from Madison Ave., plastic in hand, Town still haunts the space via a small collection of high-end wines taken over by the new team. So if you’re looking for something big on the hush, hush, flag down either Turley or Alveras to tap into the secret stash. Password: New England Clam Chowder. Seriously.

Bang For Your Buck
Cremant du Jura Brut NV, André & Mirelle Tissot $52
You must heart the Jura for its purposely off-the-wall oxidized wines that challenge the expectations of unassuming folk. Though the Cremants tend to be the most straightforward wines from the region (i.e. not quite as savory or oxidized), they still boast enough funk to place themselves firmly within the Jura. Some of the best bubbly to be had in this price point, period.

Riesling Kabinett ‘Dorsheimer Burberg’ 1997, Schlossgut Diel $76
One of the most respected estates in the Nahe, Diel makes excellent terroir-driven wine, and at 13 years out, this is at the summit of its life. Easily one of the best deals on the list at $76.

Pinot Noir 2007, Pannonhalmi Apátsági $45
Pinot Noir from Hungary? It’s wines like this at this price point that make us wonder why Hungary isn’t producing more juice—or at least why we aren’t seeing more of it. This is lean and versatile PN, produced under the supervision of Hungary’s iconic winemaker, Tibor Gál.

Cabernet Sauvignon ‘Beast’ 2006, Buty $56
Despite the embarrassing name play (buty, beast, get it?), this is probably the best choice on the list for under $100 to pair with heavier fare. Its beefiness is unmistakably New World, but it boasts enough restraint and detail to make it quaffable.

Under $40
Furmint 2007, Chateau Pajzos $32
One of the top producers (along with Oremus and Kiralyudvar) responsible for putting the dry whites of Hungary on the map. Strong acidic backbone, big aromatics, and that trademark Eastern-European grit.

Off The Beaten Track
Mauzac Nature ‘?quand même!’ 2006, Plageoles $55
Robert Plageoles is, in effect, the last prophet of true Gaillac wine. This region, located in Southwest France, was an important region for centuries, but gradually fell victim to monotony. With wines like this 100% Mauzac Sparkler, however, Plageoles stands to remind us of both the region’s history and its promise.

‘The Electric’ 2008, Red Hook Winery / Abe Schoener $55
Totally off the wall. From swearing off soap to his desire to “banish fruit flavors in wine,” Abe Schroeder’s view on wine production is as counter intuitive as his wines are psychedelic. ‘The Electric’ is Abe’s wonderfully odd blend of Chardonnay and a small portion of botrytised Riesling from the Northfork of Long Island. Complex, random, and an excellent match with Tien Ho’s grub.

Syrah ‘Syrocco’ 2007, Thalvin (Alain Graillot) $42
Story has it that Alain Graillot (one of the biggest names in N. Rhone Syrah) stumbled upon this secret underground Moroccan Syrah lab while on a North African camel drive. Okay, not really, but he did discover these guys and has since put Morocco on the wine map. Medium-bodied, lush, aromatic, and effortless.

Break The Bank
‘Carte Blanche’ Grand Cru Blanc de Blancs Brut NV, Jean Milan $110
This focused, mineral-driven Blanc de Blancs is but one of the several handfuls of exquisite grower Champagnes in Terry Theise’s portfolio. An incredible value for this level of precision.

Chinon ‘Les Picasses’ 1990, Olga Raffault $120
Raffault is one of the true stalwarts of the Loire Valley, consistently setting the bar for age-worthy Chinon. The 1990 is Confucius in Cab Franc form.

WTF?
Volnay ‘Vieilles Vignes’ 2005, Delagrange $175
Beautiful wine—be it still a bit taut— but the pricing is sordid. Save a whale instead.
WineChap is a start up that seeks to foster more intelligent boozing by demystifying the culture that surrounds restaurant wine lists. Currently the site boasts more than 160 wine list reviews in New York City.