LOWER EAST SIDE— Is Matt Levine abandoning the Eldridge? A tipster told us that a friend had been shown the space by a broker and that it was on the market. We asked Levine, who responded "I think like anything out there, with the right offer - it can be bought...haven't you ever seen 'Indecent Proposal'? I personally have received a lot of inquiries about selling The Eldridge from the day I purchased it because of our location and attractive rent . . . I am not 'selling & shopping' The Eldridge, but I am listening to offers worth listening to. If I receive a decent offer for The Eldridge, I would entertain selling it, it can't hurt to 'entertain and listen.' But I wouldn't consider it 'on the market' at all." We think that means that it's "on the market", but "can't confirm" or "deny". [EaterWire]

NIGHTLIFE— Former Sol owner Paul Seres has replaced the Mayor of the Meatpacking District David Rabin as the new head of the New York Nightlife Authority (NYNA). Seres tells Blackbook that he plans on pushing for enhanced training for bar security, better coordination with the NYPD and city government, and getting more nightlife owners elected to community boards to "help create a balance between small businesses and the NIMBY’s that want to turn New York City into a bedroom community." [BB]

NIGHTLIFE— In a shot across the bow, the New York Times has hired Sarah Maslin Nir to pen a nightlife column for the City Room blog and dubbed in the Nocturnalist. Ms. Nir "goes out so you don't have to", and made her first piece about a poorly attended event at Good Units called Skrapper. Welcome to the party! [City Room]

EAST VILLAGE— The announcement of New Orleans' themed bar Billy Hurricanes opening in the East Village has already created a panic, with EV Grieve declaring that they "can smell the vomit already". A TJ's owner declares that he isn't out to ruin the neighborhood, saying the bar will be "a place where you can watch sports, not a frat house." [GrubStreet] 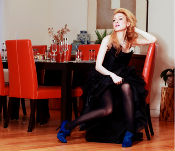 CHELSEA— In what amounts to a new low in the strange world of reality stars hosting nightclub events, the Gates is pimping a birthday party for Devorah Rose. In case you weren't aware, Ms. Rose has "worked tirelessly to improve Social Life Magazines, spearheading a redesign that has been described as “classic,” “insightful,” and “provocative", and has "worked with cover-stars including Kim Kardashian, Kellan Lutz, Lydia Hearst . . .and Whitney Port". Get us into that party! [EaterWire]
· Nightlife Notebooks [~ENY~]
· Nightlife Coverage [~ENY~]