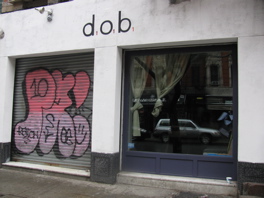 It was another marathon meeting last night, as the Community Board 3 Liquor License Committee gathered for a six-hour meeting, granting (and crushing) dreams of liquor for dozens of East Village and Lower East Side bars and restaurants. Here’s how it all went down:

1) In a display of the board’s unpredictability, they voted to deny a beer and wine license for Michael 'Bao' Huynh’s DOB 111 because of “insufficient community outreach.” The board cited the oversaturation of bars on St. Mark’s and said the restaurant’s 27 signatures from the block were too few. “If he doesn’t qualify for a license, then we might as well deny everyone,” said one board member. It was still not enough for the board, who urged Huynh to appear before the full community board next week if he wanted to protest the 3-2 decision.

2) Sandwich shop This Little Piggy Had Roast Beef, from the team behind Artichoke, was approved for a beer license. While the owners haven’t decided what beer they will have yet, they said they were hoping to install a tap with a heavier beer, possibly Guinness. Additionally, they said that construction began yesterday on the Chelsea branch of Artichoke.

3) The board approved a license for Radical Records president Keith Masco’s hybrid "seafood market/restaurant/high-end cocktail bar" at 171 Avenue A. The decision came after a nearly one-hour discussion, which included many angry neighbors, who claimed that the seafood market portion of the project was just a front to appear different from being just another bar on the crowded block. In response, the board required that Masco extend the hours of the market from the originally planned 7 p.m. closing to stay open the duration of the restaurant’s hours.

4) The night was full of rejections and refusals to extend licenses. One venue that lost its license was Neway KTV, a karaoke joint at 91 Eldridge Street. Many neighbors showed up to speak out against the spot, and one even alleged that the owners had been providing free drinks to encourage neighbors not to show up in protest.

5) TPoutine, the LES shop that serves up Canada’s signature dish, reappeared before the board this month after withdrawing their license last month due to noise complaints. While the owners said they had made changes to the sound system, two neighbors called the community board to complain, so the board denied the license again, telling the owners to wait up to six months to prove they had become a good neighbor.

6) The other rejection on the LES was for Melted, the forthcoming grilled cheese-centric restaurant. The license denial came after several residents of the building, located at 101 Stanton Street, said that they had had enough with local venues serving alcohol, turning their stoop into “a public urinal,” including one resident who said he jumps over a puddle of urine on a nightly basis.

7) Over in the East Village, Mediterranean restaurant Zerza was denied a transfer of its existing license from its current Sixth Street location to the former Le Souk space on Avenue B., because the community board said it was concerned with the building’s troubled past. And Singas Famous Pizza, which operated on Second Avenue before relocating to Avenue C, was denied a license with the night’s most common refrain: oversaturation.

8) The night was not without good news. Meatball Shop was approved to extend its license to an outdoor 12-seat sidewalk café. Brick Oven Pizza, located in the former Café Brama location were approved for a beer and wine license. And Vietnamese restaurant An Choi was approved to expand its license into its recent expansion space in the adjacent storefront.
—Thomas Garry
· All Community Board Coverage [~ENY~]