Getting Around the Red Tape of Faustina's Wine List 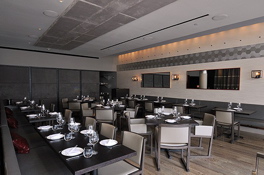 Faustina, Scott Conant’s follow up to Scarpetta, gets a well-chosen list of mostly Italian wines that reads about as smoothly as the dining room’s layout. Okay, so we had to get one jab in, but overall we’re going to avoid the played-out lambasting of the room and its perilous bathroom journey, because honestly, it isn’t all that bad. And the wine list, despite its haphazard organization, is really very good. It simply suffers from what one might call “bureaucratizing,” or the breaking up of a list into unnecessary parts—at various times by varietal, region, and style—that make it difficult to get a grip on the list as a whole. However, no matter how hard the finds are to locate, what matters most is that they’re there in the first place. And they are.

Now, this isn’t the place to go hunting big names and laying out a month’s rent—though you certainly could. The list is brief (just under 150 selections), fairly young (the oldest vintage dates back to ’93), and shines brightest amidst the selections priced between $50-$100, particularly those of the whites. An element of quirk is evident throughout (see: Coenobium’s Rusticum, Fiorano, Zyme) and comes courtesy of Jeff Tascarella (former GM and Wine Director of Scarpetta) and Emily Herron (former Wine Director/steward of the artisan at August). The remainder of the list bounces between the recognizable and the challenging, making it well suited to the varied clientele. As for pricing, it’s relatively standard with the occasional gift, and you’ll do best if you come prepared to drop a little more than $50. If not, the by-the-glass list is a consistently appealing—and affordable—place to play around.

Bang for Your Buck
Brut Rose 2007, Murgo $60
One of the great indigenous sparkling wines out of Italy, this 100% Nerello Mascalese is sourced from the volcanic soil surrounding Sicily’s Mt. Etna and done via the Méthode Champenoise. All dust and flora.

San Valentino 2006, Paolo Bea $60
New bottling from one of Italy’s greatest artisan winemakers. Here he takes the traditional Montefalco Rosso blend (Sangiovese and Sagrantino), but takes the price down for the people. One of the most exciting wines to hit the market in recent months.

Off the Beaten Path
Nebbiolo (Spumante) 2005, Erpacrife $110
One of the only sparkling wines made from 100% Nebbiolo (the grape responsible for Barolo/Barbaresco). Also produced via the Méthode Champenoise, this has all of the aromatics one expects from Nebbiolo with the delicacy that makes it just as good with crudo as with pasta.

Bianco Botte 25 1993, Fiorano $200
The wines from the now deceased Prince Ludovisi are among the most extraordinary in Italy. Like traveling to an alternate wine galaxy where the rules of aging and common sense do not apply. After a dip in the decanter, this ’93 Malvasia is about as close to the unification of Quantum Theory and General Relativity as you can get.

Ferrau 2004, Petrilli $40
Petrilli is making some of the more interesting wines coming out of Puglia today and this 100% Negroamaro is equal parts easy and nerdy.

Break The Bank
Bianco della Castellada 2002, La Castellada $114
Barrel-aged on the lees for a prolonged period and bottled unfiltered, this is an opulent, complex blend of Chardonnay, Pinot Grigio, and Sauvignon. It is with this very wine that the Bensa brothers entered the cult Friulian elite.

San Leonardo 2001, Gonzaga $100
The origins of this vineyard site date back to the 9th century, but today the winery is under the management of Mario Incisa of Tenuta San Guido (Sassicaia)—a man with some serious cred outside his family connection. Bordeaux-style blend from Northern digs. Dusty stuff. Medium bodied, with high-toned fruit and a strong herbal component. Drinking in a sweet spot now.

Schiopettino 1997, Ronchi di Cialla $285
Indigenous varietal in the hands of the producer almost solely responsible for its preservation. An argument for the viability of Schiopettino in a single back vintage bottling. Herbaceous, earthy, and gloriously odd.

Brunello di Montalcino 1999, Canalicchio di Sopra $170
Canalicchio’s winemaking process is steeped in tradition; all of the grapes are hand selected (no machines), only big barrel aging (no barrique) and pure Sangiovese Grosso grapes. The ‘99s are in a great spot across the board and this guy is no exception.

Barolo 1995, Oddero $135
Yes, there are still Barolos that represent great value. Oddero is one of the region’s great traditionalists and this bottling--from the under-appreciated 1995 vintage--shows off Nebbiolo’s girly side. In its prime at present.

WTF?
Brunello di Montalcino ‘Madonna del Piano’ 2003, Valdicava $325
Although this overrated nonsense is captured under the “Classic Sangiovese” heading, it is anything but that. Pricing is fair, but the wine itself—from the warmer ‘03 vintage—is a bit too spoofy to warrant the dropping of three bills and change. If you’re looking to go Brunello, spend half on Canalicchio and get twice the wine.