The Loehmann's of Italian Wine Lists at 'Inoteca Liquori

Share All sharing options for: The Loehmann's of Italian Wine Lists at 'Inoteca Liquori 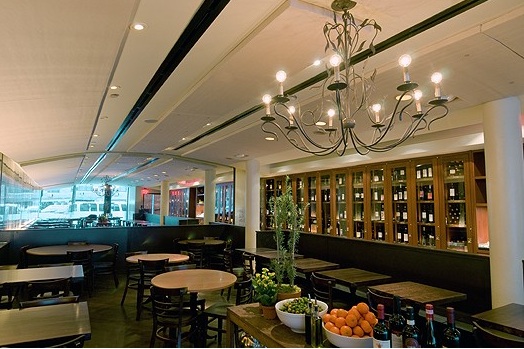 By God there’s a garage sale going on up on 24th Street! Deep decks of Italian relics and outer-regional geek ornaments await those who dare come within 10 blocks of Mercury Bar. What we're saying is, 'inoteca liquori hoards the Loehmann’s of Italian wine lists—all the back vintage Barolo you could drink, unique verticals like Antiniolo’s impossibly classic Gattinara, and perspective-changing rarities from producers such as Terlan and Movia that date back to the 60s, all sporting anorexic mark-ups. What’s more, if you happen to stumble in for a sammie after 11 PM, you’ll find a short list of back vintage wines at prices that hover near wholesale. But it’s not all about the top-shelf. If you’re looking to spend less than $75, there are few wine lists in the city that offer more personality, variety, and vintage depth in this range. In short, Denton-squared and sommelier Sean Perman have fashioned a list that deserves a pilgrimage, even if it means dodging gaggles of boozy coeds on "Slurry" Hill.

Bang For Your Buck
Lazio Bianco ‘Coenobium’ 2007, Monastero Suore Cistercensi $42
Blend of native white varietals produced by nuns in Lazio and overseen by one of Italy’s greatest artisan masters, Gianfranco Bea. Wild, savory, and totally singular. Pair with the Eucharist.

Pallagrello Bianco 2006, Vestini Campagnano $45
Vestini almost single-handedly resurrected this ancient varietal, a favorite of Pliny the Elder. Drinks like Italy’s answer to the whites of the Northern Rhone.

Ghemme 2001, Ioppa $61
This small denomination just North of Piedmont is capable of producing some fine Nebbiolo at manageable pricing. This one, from the now legendary 2001 vintage in Piedmont, is all classic Nebbiolo aromatics and bright, forward fruit.

Marzemino 2006, Pratello $45
Marzemino, indigenous to neighboring Trentino, takes a bit of a detour and lands in the hands of this new biodynamic estate in Lombardia. Tastes like the lovechild of Syrah and Gamay.

Rosso di Verona 1996, Musella $32
Quaint Cab Sauv/Corvina blend from this up-and-coming estate. All the earth, underbrush, and integration you could wish for. Highway robbery at $32.

Under $40
Spinaje 2004, Dama del Rovere $32 (375ml)
This might reside in the vini dolci section, but the wine is totally bone dry. 100% Garganega (the grape in Soave) done like a Fino sherry. Smells like slightly oxidized Soave, drinks like Jerez.

Uvarara 2005, Frecciarossa $38
Hailing from the hills of Oltrepo Pavese in Lombardia, Frecciarossa continually produces some of the best wines from the region's indigenous grapes. Strict red fruit, earth, bush, and smoke.

Off The Beaten Track
Kaplja 2002, Damijan $49
Damijan is a student of the non-interventionist Friulian zeitgeist, led by Josko Gravner. No Amphorae here, but still totally au natural – that is, extended lees contact, no temp control, etc. Cloudy, off-beat, and boundary-pushing, this is holy water for wine geeks.

Casavecchia 2004, Villa Carafa $42
Casavecchia is but one of the many ancient Roman varietals re-cultivated in Campania over the last decade or so, and Villa Carafa is one of the region's great value-driven producers, here providing us with a polished, structured rendition of this dusty grape. Full-bodied and deeply aromatic, this baby takes no prisoners.

Primitivo di Manduria 2006, Maretima $33
After many years of genealogical confusion, DNA testing has proven that Primitivo and Zinfandel are in fact the same grape. Festive bundle of facile red fruit.

Break The Bank
Barolo ‘Roche dei Brovia’ 1982, Brovia $265
Brovia is responsible for some great, value-driven traditional Baroli that remain relatively under-the-radar. The ‘82s are cooing right now, and this is surely no exception.

Valpolicella Classico Superiore 1996, Dal Forno $240
Dal Forno’s Valpolicella is better than about 90% of the Amarone out there. In the dead center of its drinking window, this is a fantastic opportunity to get in with the Prince of the Veneto.

Sfursat ‘Fruttaio Ca’ Rizzieri’ 1997, Rainoldi $200
Sforzato are truly unique reds from Lombardy made from raisinated Nebbiolo grapes that are vinified to dryness a la Amarone. They pack denser fruit, brisk acidity, and a highly appealing old-school funk. This is a rare chance to experience this wine with bottle age.

WTF?
Tannat 2005, Mirabile $59
Tannat is a varietal capable of producing wines so big and tannic that if ignited could destroy a small South American village. Very few can handle this varietal with grace – and God love Mirabile for trying – but this is still punishment for the palate. Needs a few more years to shed the fury.