Tips are flooding the inbox this morning with word of In-N-Out's imminent arrival in NYC. One reports that "Signage is up on the corner of 14th and Broadway in Union Square, with In-N-Out employees handing out flyers." Meanwhile the above signage was spotted at 22nd St. and Broadway, right within spitting distance of the Shake Shack. Have the cries, the dreams of New Yorkers finally been answered?

Or is this a really well organized (and for In-N-Out lovers, very mean-spirited) hoax? Rumors have circulated for years that the California chain was planning on someday hitting the East Coast. For their part, the 'workers' handing out fliers—who are wearing In-N-Out caps and aprons— said they were the real deal and that the stores will open on July 4, 2010.

But it looks like it was not meant to be. The real estate agent for the space on 933 Broadway says he has no lease with the burger joint and that it "sounds like someones having some fun on April Fools." And in any case, it's a strange day to pick for a massive publicity campaign.

You have to hand it to the pranksters—this was a pretty genius play. 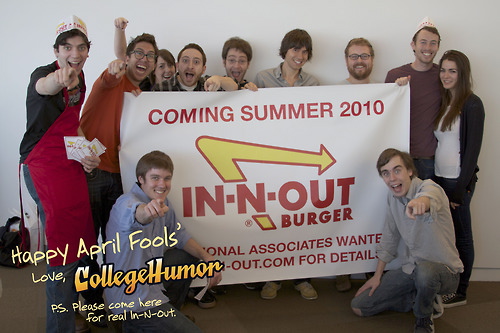 via Ricky Van Veen.
See any more In-N-Out signage? Know who the prankster is? Send it our way.
· In-N-Out [Official Site]