As Bowery Heats Up, Double Crown Undergoes Some Tweaks

Share All sharing options for: As Bowery Heats Up, Double Crown Undergoes Some Tweaks

Double Crown, AvroKO's exploration of Southeast Asian cuisine during the British Empire, is undergoing some aesthetic and culinary renovations a year and a half after its big arrival on the Bowery. The restaurant has been kept dark the past few Mondays in order to make some tweaks to the room's design—goodbye communal table!—and replace the awning with new signage (after removing the Bowery's best signage in '08), while giving the menu a more serious makeover.

Despite getting two stars from Frank "The Tank" Bruni in 2008, Double Crown's menu has not made it a real destination on the Bowery's new restaurant row. A peek at the new offerings (below) reveals that the AvroKO team has made efforts to make it less colonial by including more standard dishes with a southeast Asian flare—a move inspired by chef Brad Farmerie's recent trip to Singapore. Is it less interesting, more generic? For sure. But it's also better, and the restaurant's two stars from 2008 certainly weren't helping to pack the place. In fact, prime time reservations are available all weekend long. But with DBGB drawing crowds and the Pulino's madness about to get underway, Double Crown is taking the necessary steps to re-establish itself as a Bowery 2.0 destination. Let's see if it works. 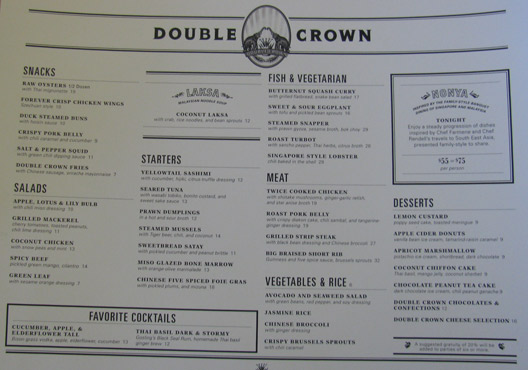