How to Avoid Getting Fleeced at Chelsea's Colicchio & Sons

Share All sharing options for: How to Avoid Getting Fleeced at Chelsea's Colicchio & Sons 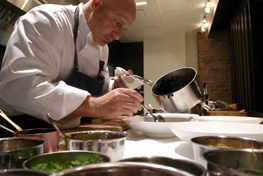 The 10th Avenue aircraft hangar formerly known as Craftsteak may have lost the steak shtick, put Tom Colicchio back in his whites, and added a star, but the wine list remains much the same. To be fair, sommelier Matthew MacCartney hasn’t had much time to de-steakhouse this list, but the selection isn’t the issue here. It’s quite adaptable, in fact, creating a fine balance between New and Old World, between geek trinkets and the recognizable. What requires repentance, however, is the wallet-whipping pricing and the somewhat pedestrian by the glass list. Now, ‘tis the general nature of wine lists belonging to block-hogging restaurants with big bills to pay, but with Del Posto slinging Italian relics at humanitarian pricing just next door, it’s hard to let Colicchio & Sons off the hook too easily. Ultimately, the selection offers great range, but the markups teeter between just above standard to slightly savage (particularly on the high end). In short, come prepared to throw your Benjis in the air.

Saint Laurent Goldberg 2004, Birgit Braunstein $55
St. Laurent is NYC’s newest wine list tramp, and rightfully so. This highly aromatic import—hailing from the same family as Pinot Noir and tasting like the love child of that and Syrah—is all value-driven brood. It’s in good hands here, coming from Austria’s top female winemaker with a few years under its belt.

Pinot Noir ‘Provacateur’ 2007, J.K. Carriere $65
JKC is among Oregon’s elite, putting out excellent wines with a definable nod toward Burgundy. This is restrained, bright PN that channels the Oregon earth with ease.

Mencia 2000, Valtuille $100
Sporting the kind of aromatics that make women faint and babies cry, this wine—coming courtesy of the varietal’s spiritual home in Bierzo—is easily one of the most rapturous examples of Spain’s most exciting varietal presently available.

Under $40
Vin de Pays Duche d’Uzes ‘Les Perassieres’ 2007, Camp Galhan $40
This small family producer in the Languedoc used to sell off their fruit, but they’ve recently begun their own bottling. This is a brawny blend of Syrah and Grenache that, despite its size, is quite easy to drink. All dark fruit and farm.

Off the Beaten Path
Cotes du Jura ‘Alliance’ 2005, Domaine Berthet Bondet $45
The wines of the Jura may be common among those of the wine geek world, but due to their savory, oxidative style, they’ve remained on the margin of the mainstream. This blend of Chardonnay and Savagnin (indigenous to the area) is an excellent intro to one of France’s great off-the-wall regions.

Chambolle Musigny 1er Cru ‘Les Gruenchers’ 2002, Domaine Fourrier $250
Les Gruenchers is a tiny plot in Chambolle known less for its elegance and more for its value and early drinkability. But when grapes pass through Fourrier’s hands, it’s simply impossible for them not to emerge as superbly balanced, elegant Burg. Just now beginning to show off.

WTF?
Shiraz ‘Dry Grown’ 2001, Chris Ringland $1,001
Brought to you by the winemaker responsible for “Bitch”—that embarrassing Barossa Grenache packaged in pink that made waves on the bachelorette party scene a few years back—comes this rare yet completely overpriced Aussie juice. Save the grand (and a dollar) for something with a bit more substance.