Welcome to Tipped Off, a forum for complaining about, discussing, and shedding light upon service charges throughout the city. 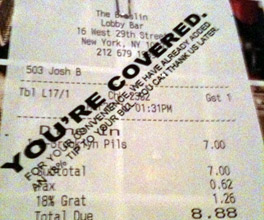 Add the Ace Hotel Lobby bar to the list of bars and restaurants that automatically charge a gratuity to the bill no matter what the party size. At present that list already includes Apotheke, The Box, Gold Bar, Masa, and Japonais (during Restaurant Week). From the tipline:

I was hanging out at the Ace with a few friends on Thursday night drinking wine and beer in the lobby. It was my turn to get a round and I paid a pretty serious amount for three drinks and when my bill came I was SHOCKED to see that tip had already been added. Are you kidding me? 18% tip added to EVERY single drink they served at the lobby bar. Bad enough right... but plastered in thick bold lettering on every check that came out they had the audacity to print, "We have already added gratuity, you can thank us later." No way...

Here's what this did in my case - I almost always tip 20%, so I tipped less than i normally would (why would I add the extra buck or two...), and now I'm pissed at the Ace for thinking that an 18% tip is ok on a $5 Pork Slap or glass of Gruner. I'm an adult going out during a recession, the tip is the only real option I have left to show my satisfaction, good or bad, with a meal or service, let me tip whatever the hell I want.

Hey, at least they made a point to mention they added the charge, however obnoxiously.
Update: We just updated with the image from a second tipster. Again, it's nice that the stamp is so obvious. Says tipster no. 2: "My guess is too many European tourists not tipping."
· Previous Editions of Tipped Off [~ENY~]
[Femia]