Zenkichi Pleads its Case for a Spot on Bowery 2.0

Share All sharing options for: Zenkichi Pleads its Case for a Spot on Bowery 2.0

Instead of EaterWire today, we close with a report from Bowery 2.0

Zenkichi, the Williamsburg Japanese restaurant that is hoping to expand to a new space at 150 Bowery, didn't have an easy go of it at this month's Community Board 2 meeting. But instead of giving up hope, they've launched a new outreach campaign, sending locals a rendering of their potential new space (kinda nice compared to the building to the left), two sets of floor plans (hello lower level lounge!), and a letter of recommendation from a neighbor in Williamsburg, Flavorpill CEO Mark Mangan. They're pleading with their new neighbors to try them out across the river or write a support letter in time for their next hearing.

Who knows if the curmudgeons at CB2 will be won over by the attempt, but let's take a look at those floor plans! 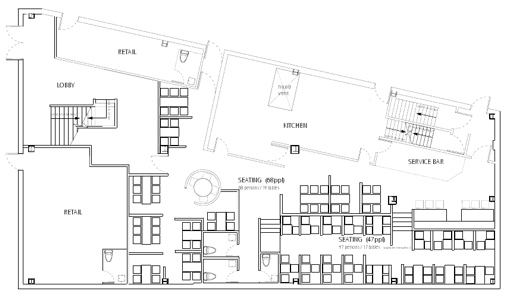 Shaul and Motoko, the owners, explain the seating

The downside of this privacy-enhanced booth layout is the lack of flexibility in seating arrangements. In the floor plan we submitted most of the tables for two will show as a table for three, and tables for 4 will show as 6; as a result, we hardly ever seat more than 70% of our full capacity. In addition, because we are a romantic destination, 73% of our customers dine between the hours of 7pm and 10pm, hence there is no worries of a large crowd spilling over at the late hours of the night.

We are applying for a TOTAL capacity of 220 people, about 100 on the first floor (where max group seating is only up to 12p), 40 in the basement “private group dining area”, and 70 for a waiting area/lounge/bar. 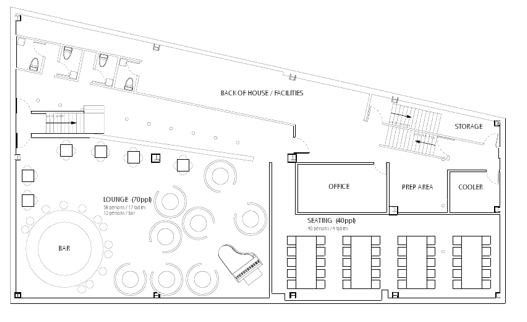 Click here to expand
Think it over neighbors.
· The Burg's Zenkichi Jumps on the Bowery Bandwagon [~ENY~]