Share All sharing options for: Barocco, 1050 Restaurant, Roth's and More Meet Their Ends 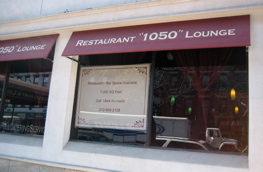 2) Hell's Kitchen: Life with Food and Drink reports that 1050 Restaurant and Lounge, the restaurant for the Skyline Hotel, is padlocked and closed: "I was thinking of nominating it for Eater's "Who Goes There," but I guess we now have the answer to that (er, nobody). So, all in all, we'll see who comes in to claim this prime piece of 10th Avenue real estate. It's looking ripe for a Bennigan's..." [LFAD]

3) Upper West Side: A tipster reports and Zagat confirms that Roth's, an UWS steakhouse, closed this week: "...the owner plans to relocate it later this year at a new spot still to be determined. In the interim, the Roth's space at 680 Columbus Avenue will reopen April 1 as Scratch, with New American cuisine from the same owner (Marc Roth) and chef (Ryan Smith) as before..." [Zagat]

4) Midtown: Roving photog Will Femia sends word that the Starbucks on the 6th Ave. side in the basement of 30 Rock is closed. [ShutterWire]

5) Midtown: Midtown Lunch reports today that Bombay Eats, an Indian pizza shop, has lost its lease. Rumor has it the space will become a ramen shop. [ML]