On this most special of days in which whole neighborhoods turn into full on shitshows, Eater is coming to you live from one of New York's oldest bars, McSorely's. She opened at 8 AM today and will be full to the brim until closing time. Have a tip to add to the live blog? Send it here. 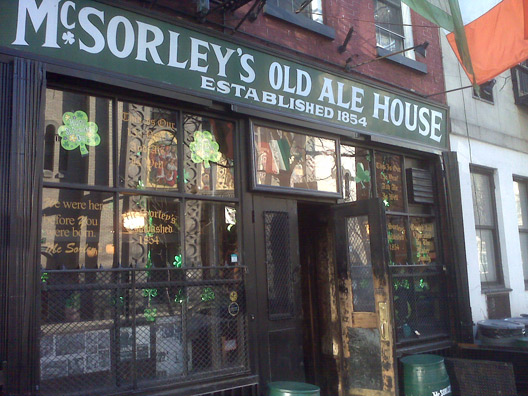 7:56: A rough head count puts the crowd here at well over 80. Of those, only about 12 appear to have started slurring their words. People started lining up outside before 7 AM for McSorley's 8 AM opening. By now the line has subsided, but oh it will be back.

8:25: Although there is a line of green barricades outside on 7th street, there hasn't been a need for them yet. The bar, however, if filling up fast.

8:43: The owner is standing outside the bar when another older man comes out. "It's Wednesday, I'm going to run and grab the Village Voice." The bar owner: "Oh good, can you get me the Irish Voice while you're there."

8:45: Now's a good time to click over to McSorley's TV, a genius Twitter/Brightkite/Flickr mashup that documents the debauchery in real time. Enjoy. 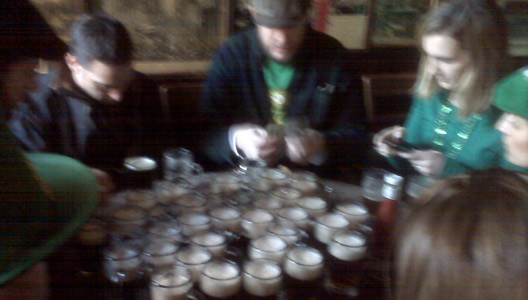 8:56: A table with 26 pints on the table begins a stirring rendition of "God Bless America" that spreads across the bar. 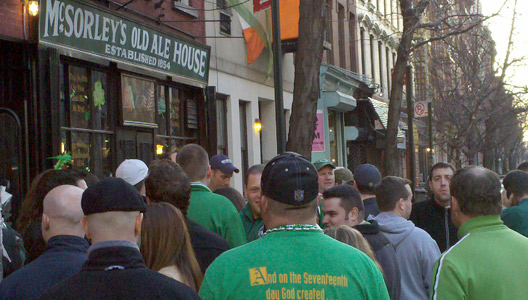 9:27: OK, it's now official. The number of people with obnoxious oversize greens hats outnumber those without. 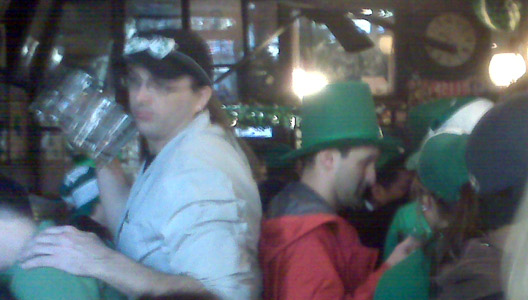 9:44: A highly unscientific survey reveals roughly 60 percent of people here are skipping work today. Got to love that Irish work ethic! One drinker says he called out of his job in Jersey City today. "Today and Halloween are the two days adults are allowed to have fun." He said McSorely's was just the first of several stops. "I don't really care where I go as long as the ale is dark and I don't pass out."

9:58: Sam D., who is carrying 4 half-pints in each hand (half dark, half light), said that this was his tenth year at McSorely's. "I've been coming here since I went to NYU," he said. Sam said he took this day off months ago. "My boss understands," he said. "He's a good Irishman."

10:04: And now the Star Spangled Banner. Hard to tell if there is more American or Irish pride going on.

10:08: Two men in suits chug their final half-pints. "Well, off to the office," they tell their table before heading out the door.

10:23: People standing at the bar at least two to three people deep. Nearly impossible to get to the bar to order. Some resorting to buying from people sitting at tables full of beer.

10:41: A generous soul (read: very drunk man) struggled to give me a strand of his green bead necklace before giving up and giving me the whole thing.

10:57: Frank, who has been coming for 13 years, made it inside after waiting in line just 10 minutes. "It's a lot shorter this year," he said. "I've waited outside for 3 hours before. I actually enjoy the waiting in line. It's fun." He chalked up the reduced crowds this year to the economy.

11:05: Some of the best McSorley's related tweets: @sloopydog: "Did @Brandon get kicked out again? They are singing "hey hey goodbye". at McSorleys." covetshop: "Dear McSorley's patrons, please be nice to the people on 7th Street. We ask you kindly not to barf on our door step." @bdkimmie4: "forgot it was st paddys until i passed mcsorleys on my way to work. some people are seriously dedicated to this non holiday."

11:07: Just past 11 and, surprisingly, McSorley's lone television is not showing the parade. Just a St. Patrick's Day themed "The Price is Right." 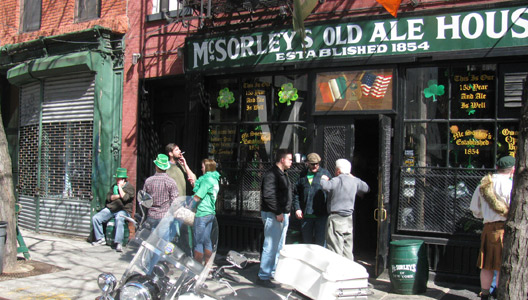 11:17: Brandon Fay, 33, has been coming to McSorley's since he was 14, making it a 19-year-tradition. "I work Thanksgiving, Christmas Eve and New Year's, but I take St. Patrick's Day off." Because he is a regular, Fay said that he feels like he's treated like he's family. "They take care of you here," he said. Like most years, he showed up around 7 AM and plans to spend his whole holiday here.

11:45: I'm learning that the reporter's notebook evokes two reactions from the intoxicated: great fear or the willingness to share their entire life story. Meanwhile, the parade is now on, but drinking contests take precedent over watching people walk down Fifth Ave. "Who cares about some guys walking?" said Sean. "Drinking is the real way to celebrate." 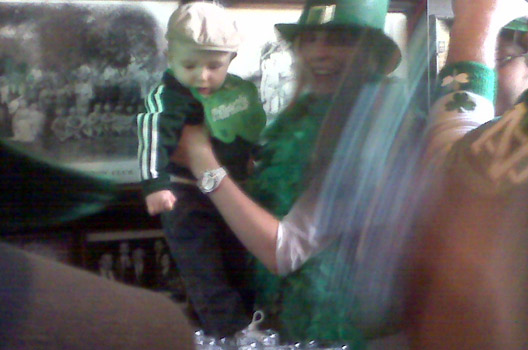 12:19: Update: After reaching for a beer one too many times, Baby Patrick has left the bar, but remains in our hearts and everyone's camera phones.

12:28: Servers seem to be competing to see how many full glasses they can carry. 22 seems to be the record to beat. 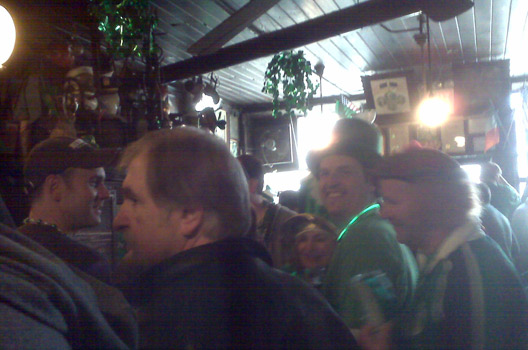 Even though it's crowded, everyone is smiling.

The Star Spangled Banner is always followed by a "U-S-A" chant, which is then followed by an "Ole, ole, ole" chant.

People in line outside: 13

1 PM: Sports chants have infiltrated the bar. First, we had a "Yankees Suck" chant. That was followed shortly after by a "Let's Go Yankees" chant. Which then became a "Let's Go Red Sox" chant. Finally, there was a lone "Let's Go Mets" chant. A few more rounds of drinks from now, this could get physical. 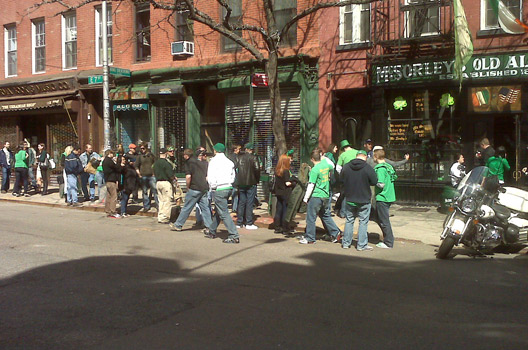 1:32: And now the answer to the age old question: Which is more popular, the McSorley's Dark or Light Ale? "That's a tough one," said one of the servers. "I'm going to have to say the dark. It has a better flavor." Now you know.

1:45: Considering the male-to-female ratio in here, it should probably come as no surprise that there is a line for the men's room and not the women's. Still, people in line seem shocked. "Well, I've never seen this before," said one man.

2:08: I have now successfully mastered drinking with two full mugs in my hand. My Irish ancestors would be proud.

2:25: For Anne G., McSorley's has always been a family tradition for at least 3 generations. "I come almost every year," she said. "Despite my heritage, I'm not a big drinker. This is my yearly exception." Meanwhile, sports talk is getting more heated, with separate tables arguing about baseball.

2:48: Kegs are being replaced at breakneck speed, but some drinks still are half full with foam. Still, no one seems to care much. I suppose the happy spirit (and holding four glasses for yourself) will do that to you.

3 PM: In the people we've spoke to, Jeffrey R. is now the new record holder for most consecutive years at McSorley's with 34 years. He said that over the years McSorley's hadn't changed much, just the people. "But I still see the same people year after year. There's no better tradition than celebrating here. Everyone's happy." That is, until the late afternoon, he said. "After 3pm, the mood changes a bit because everyone is sufficiently drunk."

On that note, it's time for Intern Thomas to get outta there and go to his real job. Let's hope they let him drunkenly nap under the desk for a little while. For those still at the McSorley's party, send reports this way.
— Coverage from intern Thomas Garry. We hope he survives this hazing.